This boy’s calendar: a window to Kavanaugh’s summer of ’82 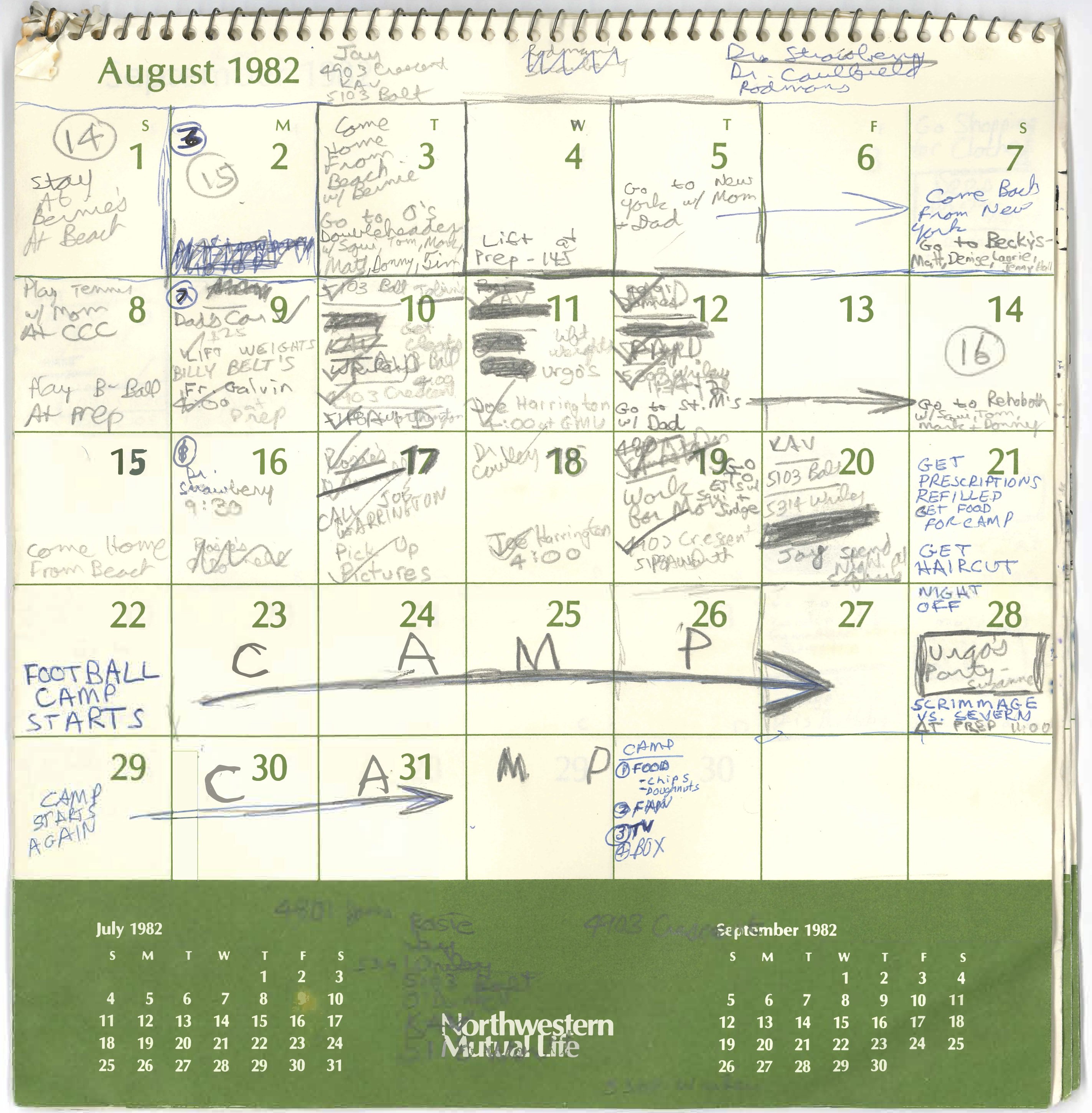 WASHINGTON — The letters are scrawled in blue ink across a calendar page from June 1982: BEACH WEEK. The big, bold font seems to indicate the importance of this nine-day stretch on the social calendar of a young Brett Kavanaugh, especially amid more mundane entries like “haircut” and “pick up pictures.”

The 36-year-old calendar was presented by Kavanaugh as an alibi against an allegation of sexual assault that will be the subject of an intensely watched hearing Thursday on Capitol Hill, which could decide whether he will be confirmed as a justice of the Supreme Court.

But look closer. You will also see a time capsule from a long-ago summer and a window into the hard-partying prep school culture in which acquaintances say the future federal judge was an enthusiastic participant. This included Beach Week, an annual rite of Washington-area high schoolers that is as anticipated by teens as it is feared by their parents.

Kavanaugh has flatly denied the allegations of three women who have come forward to accuse him of sexual misconduct amid drunken parties during high school in suburban Maryland and college at Yale.

In earlier public statements, he distanced himself from the boozy reputation of boys from Georgetown Prep, portraying his younger self as a church-going, high-performing scholar athlete.

“I drank beer with my friends, usually on weekends,” he said. “Sometimes I had too many. In retrospect, I said and did things in high school that make me cringe now.”

Senators are likely to key in on his shifting descriptions of his high school years as they investigate a claim by Christine Blasey Ford that Kavanaugh tried to rape her during a small house party that summer. Ford gave her account of an abusive encounter with Kavanaugh in an article in The Washington Post.

Since then, other women have gone public with allegations against Kavanaugh. In an article published Sunday by The New Yorker, a Yale University classmate, Deborah Ramirez, described Brett Kavanaugh placing his penis in front of her during a dormitory party. In a sworn declaration released Wednesday, Julie Swetnick of Washington, D.C., said she witnessed Kavanaugh “consistently engage in excessive drinking and inappropriate contact of a sexual nature with women in the early 1980s.”

In his prepared statement for Thursday’s hearing, Kavanaugh said: “Sexual assault is horrific. It is morally wrong. It is illegal. It is contrary to my religious faith.” Referring to Ford — the only accuser asked to testify at Thursday’s hearing — he said: “I have never done that to her or to anyone. I am innocent of this charge.”

Efforts to gauge Kavanaugh’s credibility have prompted a close examination in recent days of various pieces of evidence from his life more than three decades ago.

As he was trying to deflect questions about teenage drinking, new stories and tweets pointed to his senior yearbook page, which includes this description: “Keg City Club (Treasurer) — 100 Kegs or Bust.” One of his highlighted quotes is “Down the Hatch!”

Kavanaugh’s yearbook page describes him as a member of the “Beach Week Ralph Club,” an apparent reference to vomiting from drinking too much alcohol.

Then there are Kavanaugh’s notations from his calendar for the summer of 1982. Along with multiple listings for parties, he includes college interviews. He notes when he’s been grounded and writes, “Go to Connecticut with Grammy.” He scribbled girls’ names — “Nikki” and “Suzanne” — on various days.

One classmate of Kavanaugh’s in the Georgetown Prep Class of 1983 said the calendar also details just how much time and attention was spent on heavy drinking, from the estates of suburban Washington to the beaches of the Maryland shore. The classmate said he saw Kavanaugh repeatedly during Beach Week. Whenever they met, the man said, Kavanaugh was drinking. But then again, so was everyone else.

“You didn’t show up without a six-pack or a keg,” said the classmate, who spoke on condition of anonymity to protect his business and professional relationships within the Georgetown Prep community. “You consumed whatever was available, six-packs, kegs, gin, grain alcohol, you name it. You drank when you got up at 10 a.m. and you were drinking when you collapsed at 2 or 3 a.m.”

At one point, the classmate said, someone from Kavanaugh’s group heaved a keg from a landing of a high rise for kicks.

Back home from the beach, there was, apparently, more drinking in July.

The first day of the month, Kavanaugh scribbled a plan to “go to Timmy’s for skis” with several football teammates. Skis was shorthand for “brew-skis,” the classmate recalled.