Analysis: At UN, leaders grapple with a fragmented world 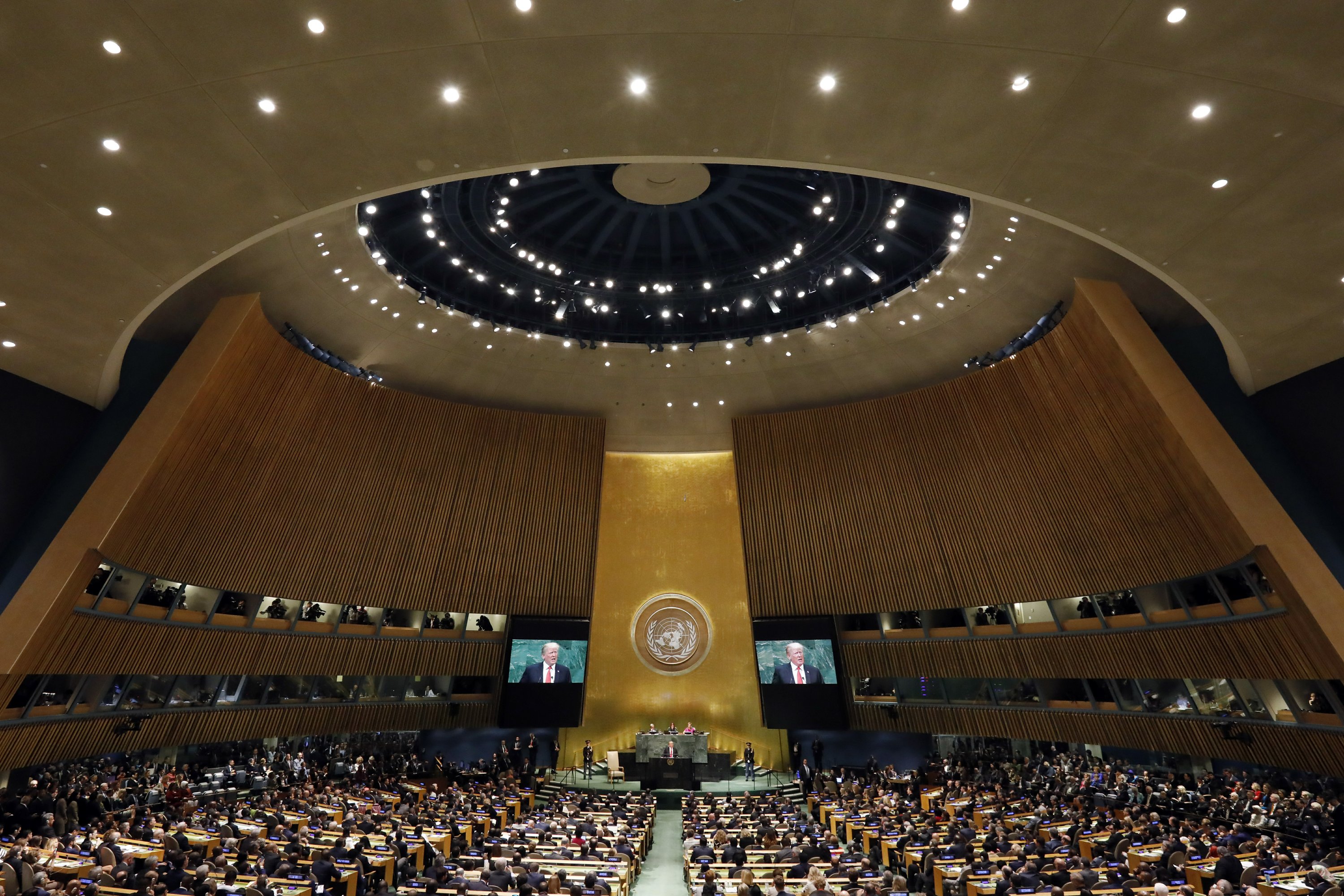 UNITED NATIONS — To watch events unfold at the United Nations this week — the parade of human leaders bringing their entreaties to the rostrum one after another — was not unlike being a therapist right before the holidays, watching the couch as the appointments go by.

There was confusion. Doubt. Hand-wringing and finger-pointing. Lament about persistent problems, and complaints about prickliness and aggression and others’ unwillingness to get along. Over it all, a generally angsty fog hung.

Except these particular complaints — in speech after carefully calibrated speech, delivered in many tongues — were not of a personal nature. They were the epic problems of the wider world.

Terrorism and tribalism, organized crime and cybercrime, poverty and climate change, post-colonialism and corruption and migration and sustainable development and gender bias and genocide — a we-didn’t-start-the-fire catalog of concerns about what’s wrong with the only planet we have.

U.N. Secretary-General Antonio Guterres set the tone the moment he opened the General Assembly debate. “Our world,” he said, “is suffering from a bad case of ‘Trust Deficit Disorder.'” A flood of agreement followed, uttered by leaders in many of the planet’s tongues.

“Nations are pulling in new directions, stretching the threads which hold us all together, and pushing the world to the edge,” said Hilda Heine, president of the Marshall Islands.

They talk nonstop here of working together, of constructing a world where people get along cheerfully and pragmatically. But even in an interconnected era, as their own remarks underscore, it’s never been harder. The technology that has stitched people into global communities also divides them, and old enmities can now be refreshed and amplified globally in an instant.

In short, most of us humans are led by women and men struggling to figure out the same fragmented world that vexes the rest of us. Multilateralism can be a confusing beast, after all, and the U.N. General Assembly makes clear that the world’s most powerful people are engaged in a massive global effort to manage change.

“We are seeing divisions not just among global leaders and nations, but within our own societies, neighborhoods, and even families,” said Joseph Muscat, the president of Malta.

It’s not that life is necessarily getting worse overall. Much research suggests that the human race is generally better off than it has ever been, and on its way up in lots of ways. That hope was reflected in the leaders’ speeches in many ways, but it was easy to miss that amid all the trepidation.

A key problem is this: The very goal that so many leaders advocate — a multitude of diverse and vigorous voices, treated equally no matter their size — also happens to be the very thing that we are all wrestling with. Indeed, technology and the way it connects people, in ways both uplifting and corrosive, emerged as a key theme — as did the struggle to harness it, if not outright master it.

This is, of course, the fundamental and usually unspoken problem with multilateralism. It’s by definition fragmented. Dictatorship may be many bad things, but it can be more coherent and efficient in the short term. That can be an appealing proposition to people hungering for order in the most complex era that humanity has ever endured.

At a time when getting along seems like such an impossible endeavor, and when trying to figure out how to negotiate space with thousands of people who are suddenly on your phone and in your virtual face, the notion of going it alone can be alluring. “Isolationism may even give someone a false sense of security at first,” Brazilian President Michel Temer said.

But full-on multilateralism — scorned by U.S. President Donald Trump, who advocates an “America first” policy in its place — holds its own perils of false promise. The United Nations has struggled at times for relevance and a place in the diplomatic ecosystem, and even its biggest proponents worry it sometimes falls short.

“Today we wish to think that our multilateral institutions, including these United Nations, are strong enough to take a stand against aggression and disregard of international rules,” Lithuanian President Dalia Grybauskaite said. “Yet sometimes reality tells a different story. We see a world that is more fractured and institutions that are crumbling instead of sheltering us from the use of force and economic storms.”

The United Nations, by its very name, was founded on a dream of ordered collaboration and a jointly charted path forward. Some believe deeply in that; others, suspicious, call it a haven for globalists and a menace to sovereignty. We live in an either-or era, and those two choices are often the either and the or.

But what if there was another possibility?

What so many leaders seem to be grappling with this week is the very nature of the new world they are helping to shape. These days, that world is more like a Twitter feed than a book. And the skills they grew up with — approaching the act of governing as a series of coherent chapters — are falling short.

Maybe, this community of nations has entered a plastic moment. Maybe all the fragmentation of the early 21st century has made things flexible and ripe for retooling, remolding, reshaping.

Maybe this year’s General Assembly theme, “making the United Nations relevant to all people,” is really about pointing the world’s countries toward managing the splintering of pretty much everything that leaders say their nations are struggling with — a fragmentation that is so confusing because it colors so far outside of the lines of traditional sovereignty.

Speaking to the General Assembly this week, Japanese Prime Minister Shinzo Abe said something noteworthy. For his nation, he said, the goal of diplomacy is “to make the future of the world and the region something that is certain.”

It never will be, of course. But the managing of humanity’s different fragments in a way that strives for coherence and collaboration, filling in some 21st-century mortar between the enduring bricks of traditional governing, might make an uncertain age just a bit more navigable.