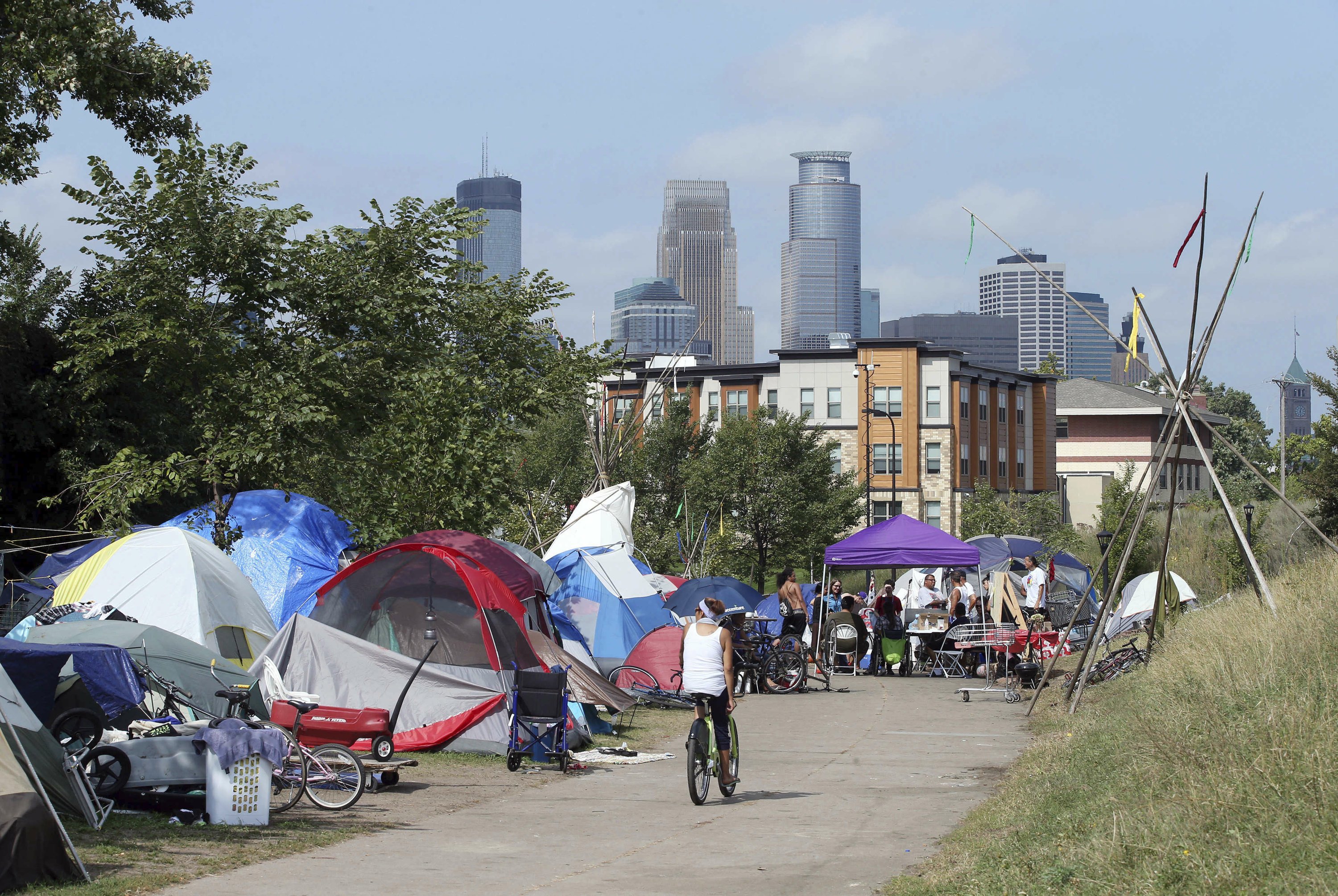 MINNEAPOLIS — When a disturbed woman pulled a knife on Denise Deer earlier this month, she quickly herded her children into their tent. A nearby man stepped in and the woman was arrested, and within minutes, 8-year-old Shilo and 4-year-old Koda were back outside sitting on a sidewalk, playing with a train set and gobbling treats delivered by volunteers.

The sprawling homeless encampment just south of downtown Minneapolis isn’t where Deer wanted her family of six to be, but with nowhere else to go after her mother-in-law wouldn’t take them in, she sighed: “It’s a place.”

City leaders have been reluctant to break up what’s believed to be the largest homeless camp ever seen in Minneapolis, where the forbidding climate has typically discouraged large encampments seen elsewhere. But two deaths in recent weeks and concern about disease, drugs and the coming winter have ratcheted up pressure for a solution.

“Housing is a right,” Mayor Jacob Frey said. “We’re going to continue working as hard as we can to make sure the people in our city are guaranteed that right.”

As many as 300 people have congregated in the camp that took root this summer beside an urban freeway. When The Associated Press visited earlier this month, colorful tents and a few teepees were lined up in rows, sometimes inches apart and three tents deep. Bicycles, coolers or small toys were near some tents, and some people had strung up laundry to air out.

Most of the residents are Native American. The encampment — called the “Wall of Forgotten Natives” because it sits against a highway sound wall — is in a part of the city with a large concentration of American Indians and organizations that help them. Some have noted the tents stand on what was once Dakota land.

“They came to an area, a geography that has long been identified as a part of the Native community. A lot of the camp residents feel at home, they feel safer,” said Robert Lilligren, vice chairman of the Metropolitan Urban Indian Directors.

The encampment illuminates some problems that face American Indians in Minneapolis. They make up 1.1 percent of Hennepin County’s residents, but 16 percent of unsheltered homeless people, according to an April count. It’s also a community being hit harder by opioids — with Native Americans five times more likely to die from an overdose than whites, according to state health department data.

One end of the camp appeared to be geared toward families, while adults — some of whom were visibly high — were on the other end. In the middle, a group called Natives Against Heroin was operating a tent where volunteers handed out bottles of water, food and clothing. The group also gives addicts clean needles and sharps containers, and volunteers carry naloxone to treat overdoses.

“People are respectful,” said group founder James Cross. “But sometimes an addict will be coming off a high … We have to deescalate. Not hurt them, just escort them off. And say ‘Hey, this is a family setting. This is a community. We’ve got kids, elders. We’ve got to make it safe.'”

With dozens of people living within inches of each other, health officials also fear an outbreak of infectious diseases like hepatitis A. Medical professionals have started administering vaccines. In recent weeks, one woman died when she didn’t have an asthma inhaler, and one man died from a drug overdose.

For now, service agencies have set up areas for camp residents to get medical care, antibiotics, hygiene kits or other supplies. There’s a station advertising free HIV testing, a place to apply for housing, and temporary showers. Portable restrooms and hand-sanitizing stations have also been put up.

But city officials know that’s not sustainable, especially as winter approaches. At an emergency meeting on Wednesday, the City Council approved a plan to use land that’s primarily owned by the Red Lake Nation as the site for a “navigation center,” which will include temporary shelters and services.

Because buildings need to be demolished, that site might not be ready until early December, concerning at least one council member. But Sam Strong of the Red Lake Nation said it’s possible the process could be expedited. Once camp residents are safe for the winter, finding more stable, long-term housing will be the goal. Several families have already been moved to shelters.

Bear La Ronge Jr., 47, moved to the encampment after he got full custody of his three kids and realized they couldn’t live along the railroad tracks where he’d been staying. Over several weeks, he watched the tent city grow, and wishes the drug users would be removed.

“This place is so incorporated with drugs, needles laying everywhere,” La Ronge said. He pointed to a cardboard box outside his tent that contained toys. “I wake up every morning and look in my toy box and there’s five open needles in there because people walk by and just drop their needles in my kids’ toys. So I need to go somewhere else.”

Angela Brown, 32, has been homeless for years. She moved to the tent city with her 4-month-old daughter, Raylynn, when it seemed to be her last option.

“I’d rather be getting a house. I don’t like being dirty, waking up sweaty,” Brown said as she cradled her daughter.

She said she did laundry at the camp and took showers, and living there was OK. But she was worried about her daughter, especially with winter coming.