The Latest: Dems walk out after Senate committee sets vote 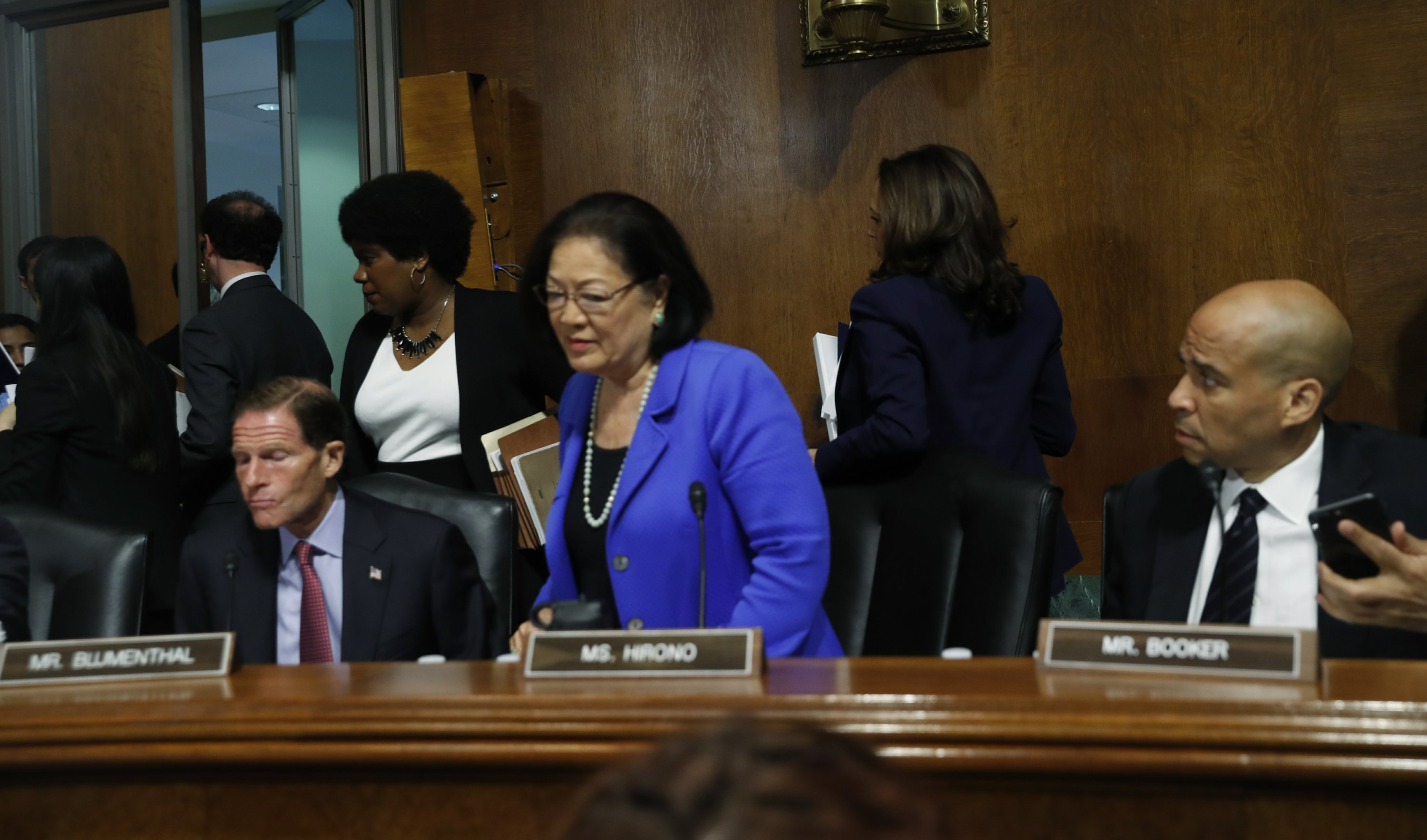 WASHINGTON — The Latest on the Supreme Court nomination of Brett Kavanaugh (all times local):

Several Democrats on the Senate Judiciary Committee have walked out of a hearing on Brett Kavanaugh’s nomination to the Supreme Court.

Kamala Harris of California, Mazie Hirono of Hawaii, Richard Blumenthal of Connecticut, Sheldon Whitehouse of Rhode Island left after the GOP chairman set a vote on the nomination for 1:30 p.m. Friday.

That was approved by a committee vote. Democrats say Republicans are rushing the confirmation.

During that vote, Hirono yelled: “”I strongly object! What a railroad job! No, no, NO.”

Republicans have blocked Democratic efforts to subpoena a high school friend of Supreme Court nominee Brett Kavanaugh who’s been described as a witness to an alleged assault involving Kavanaugh about three decades ago.

The Senate Judiciary Committee’s vote to subpoena Mark Judge has been defeated in a party-line vote, with all 11 Republicans on the panel voting against the motion and all 10 Democrats voting for it.

Democrats say Judge has never been interviewed by the FBI or questioned by a member of the committee, and that committee has a responsibility to subpoena Judge before it votes on whether to recommend Kavanaugh to the full Senate.

The committee chairman, Iowa Republican Chuck Grassley, has read a statement from Judge that says he doesn’t recall the events described by Kavanaugh’s accuser and “never saw Brett act” in the way that he’s accused of.

The Senate Judiciary Committee is set to vote at 1:30 p.m. on whether to recommend Supreme Court nominee Brett Kavanaugh’s nomination to the full Senate.

The chairman, Iowa Republican Chuck Grassley, announced the vote as the committee began its meeting.

Kavanaugh has just picked up a key vote of support from a committee Republican, Arizona’s Jeff Flake.

Republicans have slim 11-10 majority on the committee. With Flake’s support, Kavanaugh’s nomination is expected to clear the committee and go to the full Senate.

The Senate could begin taking procedural votes over the weekend ahead of a final confirmation vote early next week.

Emotions in the Capitol are running high over the Supreme Court nomination of Brett Kavanaugh.

Soon after Republican Sen. Jeff Flake announced he’d vote to confirm Supreme Court nominee Brett Kavanaugh, he was cornered by two women as he got into an elevator to head to the Senate Judiciary Committee.

Through tears, the women implored him to change his mind about his Kavanaugh vote.

The women were seen in TV footage blocking the Arizona senator from closing the elevator door. One woman begged Flake to look him in the eye. She said: “Look at me and tell me that it doesn’t matter what happened to me.”

Another woman said Flake was allowing someone who “violated someone” to serve on the Supreme Court. Both women cried as they spoke to him.

Eventually a member of Flake’s staff said they needed to go and the doors closed. A committee confirmation vote is set for 1:30 p.m.

Kavanaugh has denied that he sexually assaulted a woman when they were teenagers. The committee on Thursday heard emotional and sometimes combative testimony from both Kavanaugh and his accuser.

It’ll be a “yes” vote on Brett Kavanaugh from one of the most closely watched Republican senators who’s determining the fate of the Supreme Court nominee.

The announcement from Arizona’s Jeff Flake that he’ll vote to confirm Kavanaugh virtually ensures that the nomination will advance to the full Senate from the Judiciary Committee.

The committee is expected to vote Friday — and if the nomination advances to the full Senate, then senators could begin voting as early as Saturday.

Flake says he wishes he could express the confidence in Kavanaugh that some of his other GOP colleagues have. But Flakes says in a statement he still has “much doubt” after the committee’s explosive hearing Thursday.

Kavanaugh has denied Christine Blasey Ford’s allegation that he sexually assaulted her when they were teenagers.

Flake says that without evidence to corroborate Ford’s story, he believes “our system of justice affords a presumption of innocence.”

Bill Nelson of Florida tweets that he’ll vote “no” if the nomination comes to the full Senate. The Senate Judiciary Committee is set to vote on Kavanaugh on Friday.

Nelson’s decision comes a day after Kavanaugh told the committee that he didn’t sexually assault a woman when they were teenagers. The accuser, Christine Blasey Ford, says she’s “100 percent” certain that he did.

Nelson hadn’t taken a public position on the nomination before his announcement Friday. Nelson had never met with Kavanaugh even though his office said they tried several times to schedule a meeting.

The senator is in a tight re-election race with Florida’s Republican governor, Rick Scott, who has previously come out in support of Kavanaugh. Scott’s campaign hasn’t responded to questions about Ford’s testimony.

Former President George W. Bush has been advocating for Supreme Court nominee Brett Kavanaugh with wavering senators in recent days. That’s according to a person familiar with the outreach who wasn’t authorized to discuss the development publicly and spoke on condition of anonymity.

Kavanaugh is a former top aide in Bush’s administration.

Bush has reached out to Republicans Jeff Flake of Arizona and Susan Collins of Maine. Bush spoke earlier this month to Democrat Joe Manchin of West Virginia in a call the senator’s office says Manchin initiated.

The White House is pushing back against a call from the American Bar Association to slow the vote on Supreme Court nominee Brett Kavanaugh until the FBI can do a full background check.

Spokeswoman Sarah Huckabee Sanders told reporters Friday that Kavanaugh has already “been through six separate background investigations by the FBI.”

Kavanaugh testified Thursday to the Senate Judiciary Committee over an allegation of sexual assault when he was in high school. His accuser, Christine Blasey Ford, also appeared before the committee during the emotionally charged day.

Sanders stressed Trump’s support for Kavanaugh and said he wanted to see a vote. She said Trump thought Kavanaugh’s testimony was “powerful, it was riveting and it was honest.”

The American Bar Association has urged the Senate Judiciary Committee and the full Senate to slow down on the vote on Brett Kavanaugh for a position on the Supreme Court until the FBI has time to do a full background check on claims of sexual assault made by Christine Blasey (blah-zee) Ford and other women.

“We make this request because of the ABA’s respect for the rule of law and due process under law,” the ABA letter to committee leadership said. “Each appointment to our nation’s highest court (as with all others) is simply too important to rush to a vote.”

The Judiciary committee plans a vote on Kavanaugh Friday.

Senate Republicans are plowing forward with a committee vote Friday on Brett Kavanaugh’s nomination. Voting at the Senate Judiciary Committee comes after an extraordinary and highly emotional hearing over Christine Blasey Ford’s allegations that Kavanaugh sexually assaulted her when they were teens. The marathon session appears to have only deepened the partisan divide.

The Judiciary committee is narrowly split with the slimmest Republican majority. And Democrats are expected to oppose President Donald Trump’s nominee.

But even if the panel deadlocks over recommending Kavanaugh, the nomination can push forward. The full Senate may start taking procedural votes as soon as Saturday toward confirmation next week.