Palestinian leader: Our ‘rights are not up for bargaining’ 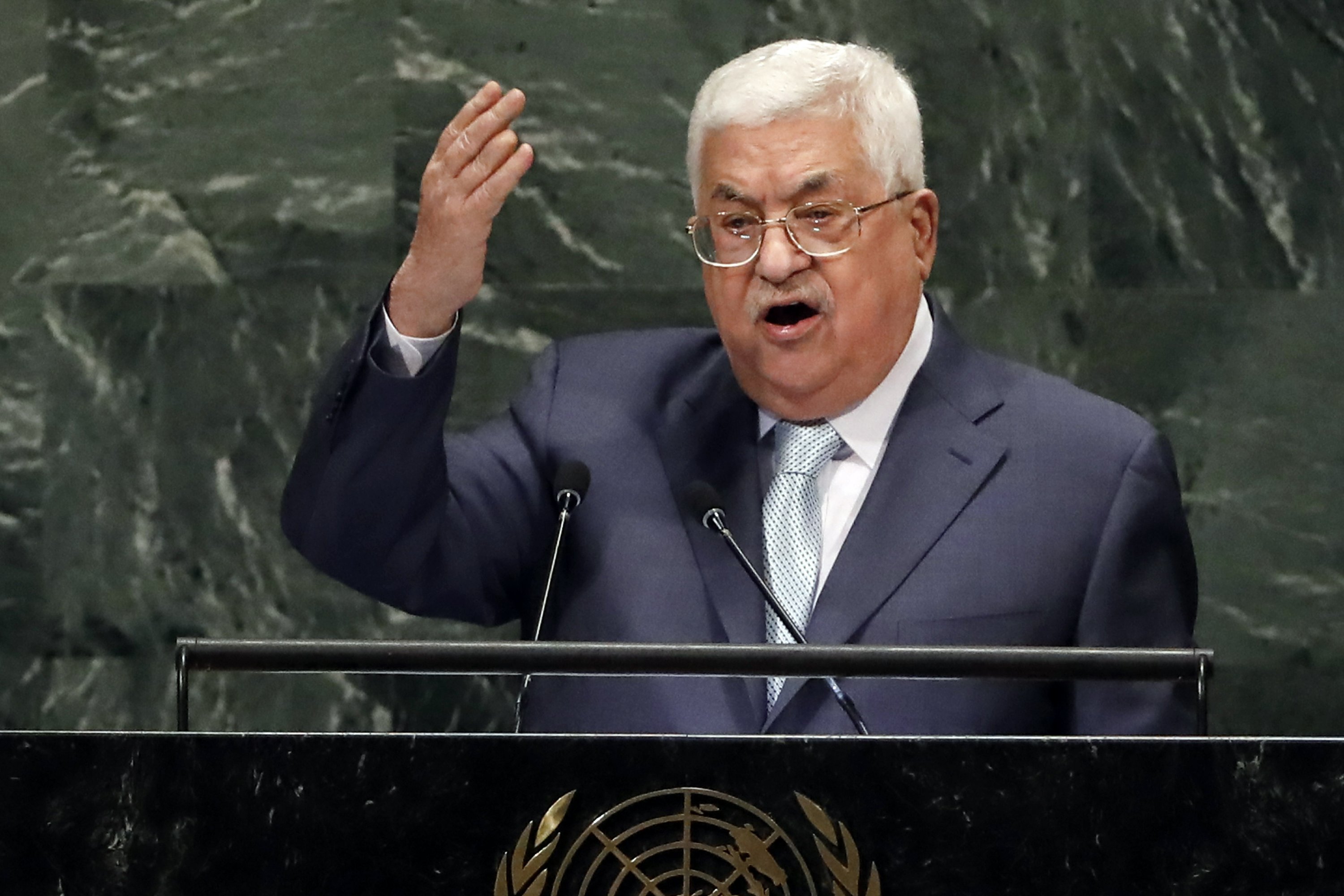 UNITED NATIONS — Palestinian President Mahmoud Abbas declared Thursday that his people’s rights “are not up for bargaining” and he accused the U.S. of undermining the two-state solution, a day after President Donald Trump suggested for the first time in office that he “liked” the long-discussed idea as the most effective way to resolve the Israeli-Palestinian conflict.

Abbas halted ties with Trump’s administration in December after the U.S. recognized contested Jerusalem as Israel’s capital, and Palestinians have said a pending U.S. peace plan will be dead on arrival because of that and other recent U.S. moves that Palestinians see as favoring Israel.

“Jerusalem is not for sale,” Abbas said to applause as he began his speech at the annual U.N. General Assembly. “The Palestinian people’s rights are not up for bargaining.”

He said Palestinians would never reject negotiation, but that “it’s really ironic that the American administration still talks about what they call the ‘deal of the century.'”

“What is left for this administration to give to the Palestinian people?” he asked. “What is left as a political solution?”

Added Abbas: “We are not redundant. Why are we treated as redundant people who should be gotten rid of?”

Israeli Prime Minister Benjamin Netanyahu was to address the world leaders later Thursday. The speeches fell on the same day that members of a vast U.N. developing-countries group formalized their decision to give the Palestinians the chairmanship in 2019. Although known as the Group of 77, it promotes the interests of 135 developing nations.

The Palestinians’ upcoming chairmanship stands to boost their aspirations for official statehood but angers Israel.

Trump made his comment about the two-state solution while meeting with Netanyahu on Wednesday. The U.S. president told reporters he believes that two states — Israel and one for the Palestinians — “works best.” He has been vague on the topic, suggesting he would support whatever the parties might agree to, a message he also recapped Wednesday.

Netanyahu had reluctantly accepted the concept of Palestinian statehood but has since backtracked. A top coalition partner is threatening to topple his government if it returns to the agenda.

The two sides in one of the world’s most high-profile and volatile conflicts are always forceful voices at the U.N. and its annual General Assembly, but their leaders are speaking after a particularly eventful year in their relations.

The Islamic militant group Hamas that rules Gaza has led protests for months along the border with Israel, aiming partly to draw attention to the Israeli-Egyptian blockade imposed after Hamas took control of Gaza in 2007.

At least 137 Palestinians, mostly unarmed, have been killed by Israeli fire since the border protests began on March 30. During that time, a Gaza sniper killed an Israeli soldier.

Hamas and Israel came close to serious conflict earlier this summer as violence soared along the border. Gaza militants bombarded southern Israel with mortars and rockets, and Israel struck Hamas targets in Gaza.

Israel says it is defending its border against attempts by Hamas, a militant group sworn to its destruction, to infiltrate and carry out attacks. But Israel has faced heavy international criticism over the large number of unarmed protesters who have been killed or wounded.

Israel has also been struggling to deal with near-daily fires caused by kites and balloons rigged with incendiary devices launched by Palestinians in Gaza. The blazes have destroyed forests, burned crops and killed wildlife.

Egyptian mediated cease-fire talks have hit a deadlock, and Hamas is now intensifying its campaign with more protests.

Palestinians were infuriated, and many Israelis were thrilled, by a series of decisions Trump has made within the last year, starting with his recognition of Jerusalem as Israel’s capital. The Palestinians also claim the holy city as the capital of an eventual state. Earlier this year, Trump followed up on the recognition by moving the U.S. Embassy in Israel from Tel Aviv to Jerusalem, a step that was widely protested by Palestinians and others in the Arab world.

His administration has also slashed aid to the Palestinians by hundreds of millions of dollars and ended U.S. support for the U.N. agency that helps Palestinian refugees.

Trump and his national security team have defended their position, saying that decades of attempts to forge Israeli-Palestinian peace have failed.

The World Bank warned Tuesday that Gaza’s economy is in “free fall,” with a 6 percent contraction in the first quarter of this year and unemployment standing at over 50 percent. A report from the bank urged Israel and the international community to take action to avoid “immediate collapse.”

It attributed the downturn to a combination of factors, including Israel’s decade-long blockade of the Hamas-controlled territory, budget cuts by the rival Palestinian Authority and a reduction in international aid, particularly from the U.S.

Other leaders who spoke at the General Assembly Thursday included Haiti’s President Jovenel Moise, who told the gathered leaders he had “spared no effort to ensure that institutions are stable and to make sure we are creating a safe and stable enviro conducive to investment and to relaunching growth” in his country since the U.N. peacekeeping mission there wrapped up in October 2017.

The mission had helped the most impoverished country in the Western Hemisphere through 13 years of political turmoil and natural catastrophe. It has been followed by a new “stabilization” mission made up of about 1,300 international civilian police officers, along with 350 civilians tasked with helping Haiti reform its justice system.

The Caribbean island country continues to face economic and environmental challenges, including its vulnerability to natural disasters. It suffered heavy blows from a devastating 2010 earthquake and Hurricane Matthew in 2016.

Earlier, Lithuania’s president assailed world leaders for being “too quiet, too passive, too ignorant” in the face of abuses, corruption and inequality, and took a dig at Trump’s America-first vision.

“We cannot let the voice of nationalism and division win over dialogue and cooperation,” said Lithuanian President Dalia Grybauskaite.

Much of the attention at the international community’s most prominent gathering has been focused on Trump, whose brash behavior and boastful address on Tuesday provoked laughter and headshakes from other leaders. On Wednesday, he chaired a Security Council meeting on nonproliferation of nuclear, chemical and biological weapons and fired off more tough words at Iran.