Tech elite stages a Revolt of the Haves against employers 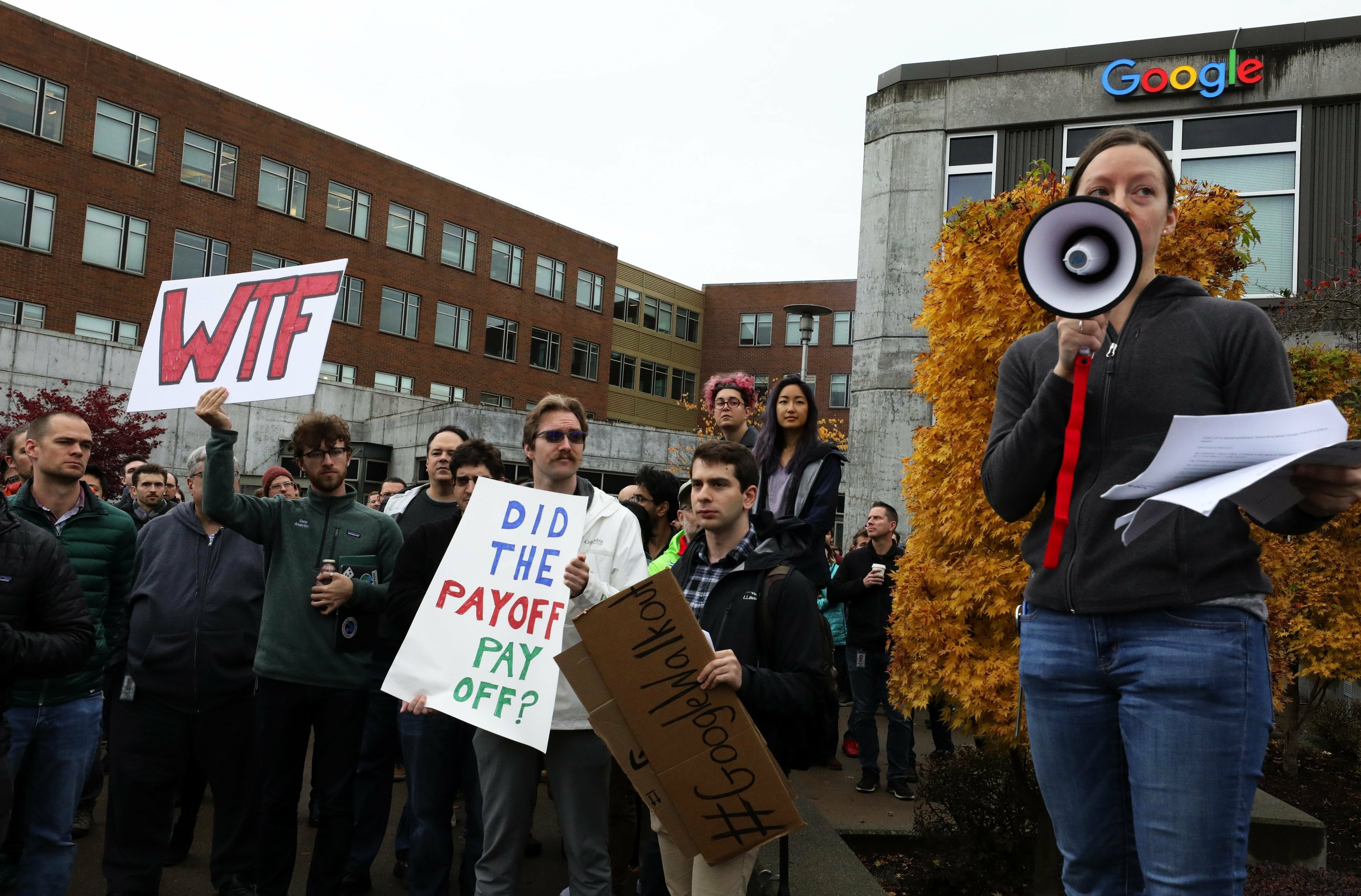 NEW YORK — When Google employees staged a global walkout Thursday to protest the company’s treatment of women, they made themselves the most visible example of a surprising trend: high-paid engineers emerging from their comfortable bubbles to speak out.

For much of the past two years, elite technology employees have been stirring and in some cases organizing —first in internal workplace meetings and messaging boards, then in signed protest letters and ultimately in company walkouts such as Thursday’s street demonstrations.

Among the issues they’ve championed: Better handling of workplace sexual harassment and discrimination, opposition to the Trump administration’s travel ban, and avoiding harmful uses of the products they’re helping to build and sell.

“For tech workers, I think the dreams about what it means to work in Silicon Valley — to disrupt, to innovate, to connect people and make the world a better place — have crashed up against a much bleaker reality,” said Kade Crockford, who tracks how new technology affects civil rights for the ACLU of Massachusetts.

It is, in many ways, a Revolt of the Haves. One that would have been unthinkable just a few years ago at cheery corporate campuses best known for flexible work schedules, free meals and snacks, and Wi-Fi equipped shuttle buses, where software engineers can earn $125,000 or more right out of school.

“These people are not easily replaceable and as a result they have a significant amount of power,” Crockford said. Much of their “political awakening,” she said, stems from President Donald Trump’s election, including concerns that his administration will misuse tools built by the tech industry.

Microsoft executives, who have sought to position their company as a moral leader, have defended the company’s immigration contract despite a protest letter that circulated through the company over the summer and tough questions for CEO Satya Nadella at an employee meeting. “We don’t see unplugging government agencies in America from email as a step that’s likely to make the country better,” Microsoft President Brad Smith said in an interview with the Associated Press earlier this fall.

Hundreds of Google workers marched on a mild Thursday in New York to a nearby park to hear speeches, hold signs and show solidarity, joining similar office walkouts from Tokyo to Europe to the San Francisco Bay Area. Signs reading “90 million reasons for change” expressed discontent about a New York Times report that executive Andy Rubin received a $90 million severance package in 2014 after Google concluded that sexual misconduct allegations against him were credible.

Organizers noted that while many of the protesters are privileged, they walked out in solidarity with contract employees and others with less influence.

Walkout co-organizer Meredith Whittaker, who researches artificial intelligence for Google, said in an interview that workers’ demands for better treatment at the company are intertwined with their larger concerns about a “general abuse of power” that includes how Google’s business ventures affect society.

“This is part of a pattern of unethical decision-making,” she said.

Tom Kochan, professor of management at the Massachusetts Institute of Technology, said the protests were a “sign of the times,” pointing out that the walkout was globally coordinated.

“Workers are saying they want a voice over this broad range of issues, not just wages and compensation, but protections against harassment and discrimination and getting rid of sham arbitration agreements they’re forced to sign,” he said.

Because of the size of the protests, there is no way that Google management could have been anything but understanding, he said.

While workers at companies from Amazon to Walmart protest all the time, usually over wages, the Google walkout was the “biggest, broadest and most encompassing of multiple issues that I’ve ever seen,” Kochan said. Which is not to say that it will necessarily lead to lasting change such as unionization or an advisory body of Google employees.

One reason the protest was so big and well-coordinated, he said, is that Google largely employs white-collar technical and support workers. That’s a more homogenous workforce than, say, Amazon, which employs both high-paid engineers and warehouse and grocery workers who earn much, much less.

“But I think American management in particular is being sent a message that workers are ready to stand up for their rights and each other in a way we haven’t seen in a long time in this country,” he said.