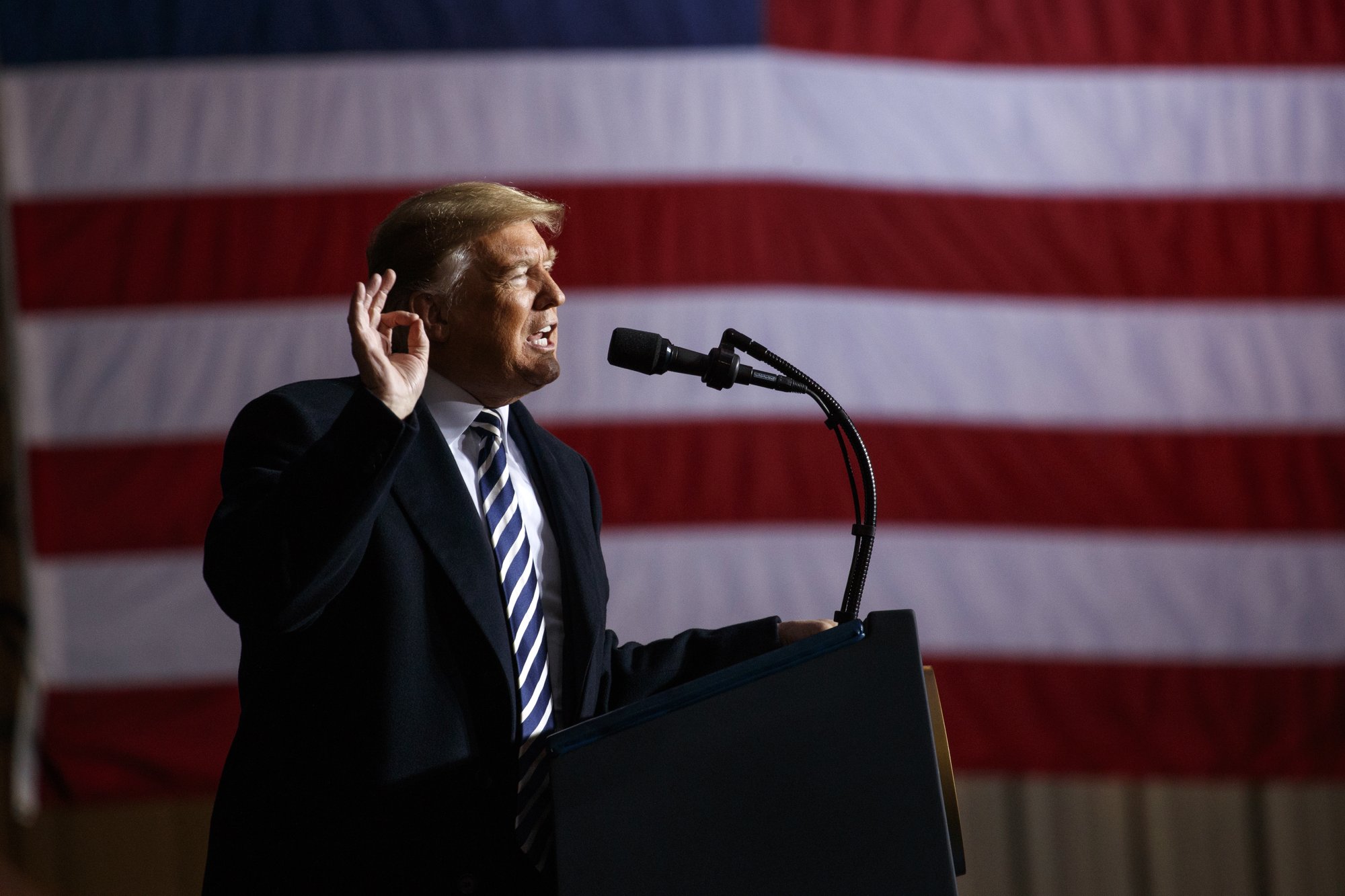 WASHINGTON — The Latest on President Donald Trump’s stance on immigration (all times local):

President Donald Trump says he plans to sign an order next week that could lead to the large-scale detention of migrants crossing the southern border and bar anyone caught crossing illegally from claiming asylum.

Trump also says he has told the U.S. military mobilizing at the southwest border that if U.S. troops face rock-throwing migrants, they should react as though the rocks were “rifles.”

Trump’s comments came in a rambling, campaign-style speech at the White House Thursday. He offered few details on how exactly he planned to overhaul an asylum system he claimed was plagued by “endemic abuse” that he said “makes a mockery of our immigration system.”

President Donald Trump says the number of military troops deployed to the U.S.-Mexican border could go as high as 15,000. (Oct. 31)

President Donald Trump says he told the U.S. military mobilizing at the Southwest border that if migrants try to throw rocks at them, the troops should act as though the rocks are “rifles.”

Trump made the comments Thursday in a speech on immigration. He promised an executive order sometime next week that would ban migrants from claiming asylum if they cross the border illegally, and would set up vast tent cities that would hold anyone coming over the border.

U.S. immigration laws say migrants seeking asylum can do so no matter how they arrive at the U.S.

Several caravans of migrants from Central America are slowly winding north. One group got into a violent confrontation with Mexican police at the border with Guatemala, throwing rocks.

President Donald Trump says asylum seekers must go to ports of entry in order to make a claim. He says he will issue an executive order next week on immigration.

In a lengthy speech Thursday, Trump said migrants are abusing the asylum system and making a “mockery” of immigration laws.

Under the Immigration and Nationality Act, migrants claiming asylum are allowed to do so at the border crossings, but also if they cross illegally.

Trump reiterated that he wanted to set up “tent cities” to hold people coming to the U.S., including those seeking asylum. But there currently is not enough detention space to hold families who are coming across the border. The military is working to create space, but nothing has been finalized. And laws prevent children from being detained beyond 20 days.

A U.S. official says the first 100 or so active-duty troops have arrived at the U.S.-Mexican border, to provide support for border patrol agents as a caravan of migrants slowly makes its way north.

The troops are doing initial assessments at the port of entry in McAllen, Texas. The official says there are about 2,600 U.S. troops now at staging bases, largely in Texas, with several thousand more expected to flow in through the weekend and move into California and Arizona.

The official spoke on condition of anonymity to provide details not yet released.

The Pentagon says more than 7,000 active-duty troops are being sent to the Southwest border, with more possible. President Donald Trump has said the number could reach 15,000.

The caravan of migrants is still hundreds of miles from the border.

President Donald Trump is expected to announce plans to deny asylum to migrants who try to enter the U.S. illegally between ports of entry as part of his latest election season response to two caravans of migrants heading toward the U.S.-Mexico border.

That’s according to three people familiar with the plans who spoke to The Associated Press on Thursday on the condition of anonymity because they weren’t authorized to speak publicly.

The White House announced earlier that the president would be making “brief remarks on the illegal immigration crisis” before he departs for a campaign rally in Missouri.

It’s unclear whether the restrictions would apply only to those traveling in the caravans or would extend beyond the caravans to all people trying to enter the country.

The announcement comes as the president has sought to focus attention on immigration while trying to drum up GOP enthusiasm heading into next Tuesday’s midterm elections.

— By Jill Colvin and Colleen Long.

Ahead of the midterm elections, President Donald Trump is tweeting a video alleging Democrats were responsible for allowing a convicted cop killer into the U.S. But he’s providing no evidence supporting his claim.

The video is reminiscent of the infamous 1988 “Willie Horton” ad used against Democratic presidential candidate Michael Dukakis and condemned as racist.

Trump highlighted the case of Luis Bracamontes, a twice-deported immigrant from Mexico sentenced to death in California for killing two police officers.

The spot includes expletives uttered by Bracamontes during his trial professing regret at not killing more officials.

The video includes scenes of a migrant “caravan,” warning, “Who else would Democrats let in?” Trump provides no evidence linking Democrats to Bracamontes.

President Donald Trump says the number of military troops deployed to the U.S.-Mexico border could reach 15,000.

Trump said Wednesday “we’ll go up to anywhere between 10 and 15,000 military personnel on top of Border Patrol, ICE and everybody else at the border.”

Trump says the move would be aimed at preventing the entry of a caravan of migrants traveling from Central America. The caravan is moving on foot and is still nearly 1,000 miles from the border.

The troop numbers have changed at a dizzying pace, with Trump drawing a hard line on immigration in the lead-up to the midterm elections.

Last week officials indicated 800 to 1,000 troops might be sent. On Monday, they announced about 5,200 were being deployed. The next day an Air Force general rejected a news report it could reach 14,000.