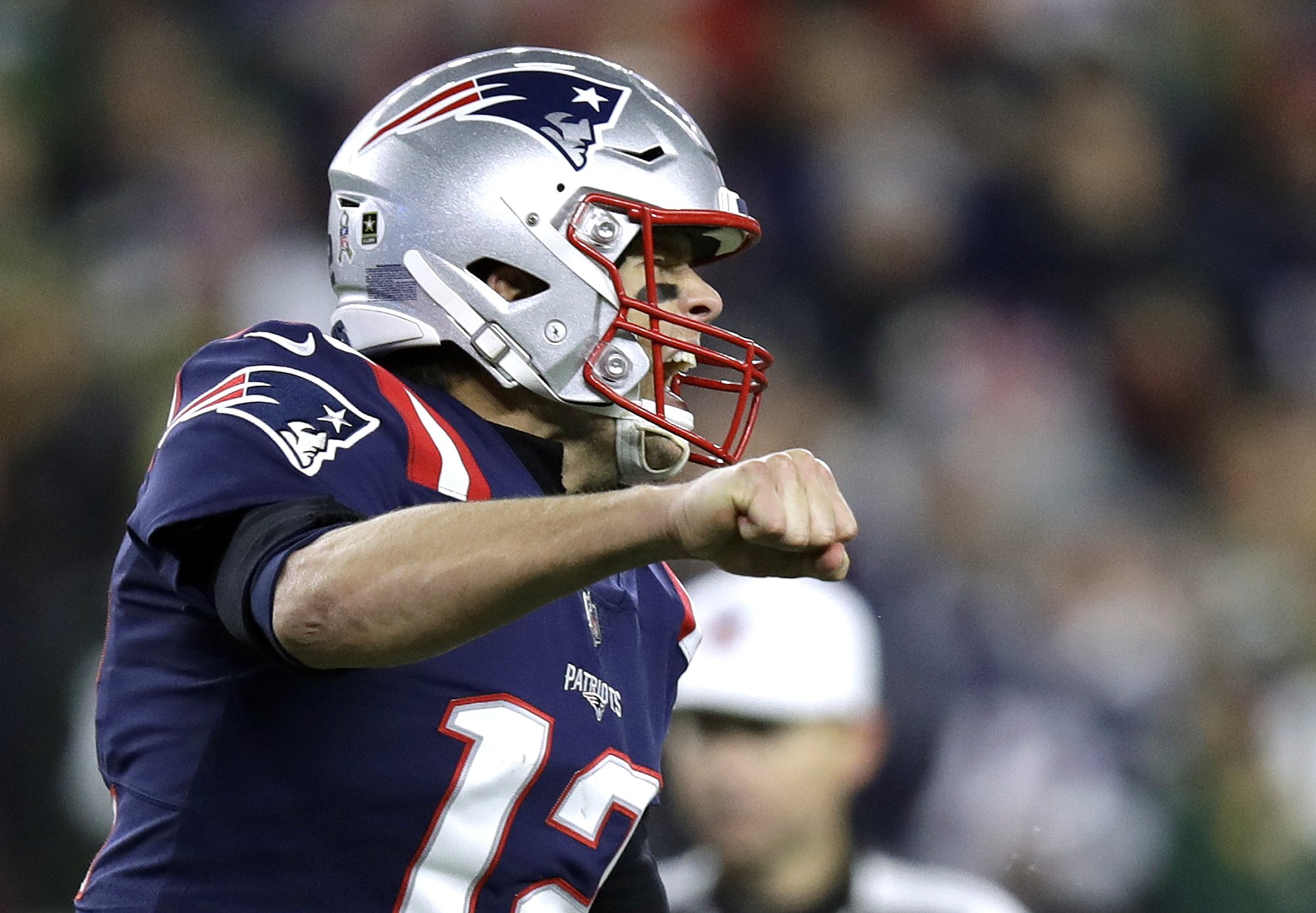 FOXBOROUGH, Mass. — Tom Brady threw for 294 yards and a touchdown, and James White ran for two scores to lead the New England Patriots to a 31-17 victory over Aaron Rodgers and the Green Bay Packers on Sunday night.

It was the sixth straight victory for the Patriots (7-2).

Rodgers completed 24 of 43 passes and two touchdowns in his second career matchup with Brady.

It was 17-all late in the third quarter when Aaron Jones fumbled for Green Bay (3-4-1).

New England receiver Julian Edelman hit White on a 37-yard catch-and-run to set up White’s second score, a 1-yard run. On the Patriots next possession, Brady connected with Josh Gordon for a 55-yard TD.

With tight end Rob Gronkowski out with a back and ankle injury and leading rusher Sony Michel out for the second straight week with a knee issue, Brady and the Patriots had to get creative.

They again turned to receiver Cordarrelle Patterson to help carry the load in the backfield.

Patterson was effective for the second straight week, rushing 11 times for 61 yards and touchdown . He worked in tandem with White to keep the Packers defense guessing. White took advantage and found space to turn short completions into first downs.

New England also capitalized on a pair of long flea-flicker passes to set up scores.

Rodgers was on target in the first half. He was elusive in the pocket and extended plays with his feet, keeping the Patriots’ secondary off balance long enough to create space downfield or some big gains.

The longest was a 51-yard pass to Marquez Valdes-Scantling in the third quarter that helped set up Rodgers’ 15-yard TD pass to Jimmy Graham that tied the game at 17. But the pocket got smaller in the second half as the Patriots defense sped him up, hitting him six times and sacking him once.

Brady completed 16 of his first 22 passes but had seven straight incompletions in the third quarter — the most of his career.

There wasn’t a turnover in the game until Green Bay’s Jones was stripped by Lawrence Guy early in the fourth quarter. The fumble was recovered by Stephon Gilmore on the Patriots’ 24.

New England quickly capitalized, using four straight completions by Brady and a 37-yard pass from Julian Edelman to get to the Packers’ 2. White scored from a yard out two plays later to put the Patriots back in front 24-17.

The Patriots’ defense tightened on Green Bay’s next drive. It culminated on third down when Adrian Clayborn and Trey Flowers dropped Rodgers for a 9-yard sack and forcing a punt.

On just the third play of the ensuing drive Brady found Gordon over the middle. Packers cornerback Tramon Williams had a shot at a tackle, but whiffed, springing Gordon for a 55-yard touchdown to push the lead to 31-17.

Packers safety Jermaine Whitehead was ejected in the second quarter.

Whitehead was trading shoves with Patriots center David Andrews when second year defensive back from Auburn spun around and slapped Andrews in the face.

He was called for unnecessary roughness and tossed. Whitehead was the replacement for Ha Ha Clinton-Dix, who was traded to the Washington Redskins last week.

Packers: WR Geronimo Allison was inactive for the Packers with a groin injury. He was a key contributor in the passing game before missing two weeks with a hamstring issue. … Starting RT Bryan Buluga left the game in the first half with a knee injury and did not return. … CB Kevin King left the game with a hamstring injury and did not return. … S Kentrell Brice left in the third quarter with a knee injury.

Team owner John Henry, manager Alex Cora and several players including World Series MVP Steve Pearce, J.D. Martinez and Brock Holt stood atop a duck boat hosting their championship trophy as they were driven onto the field before kickoff.

Cora greeted Patriots team owner Robert Kraft and others, and also took a photo with Brady.

Patriots: At Tennessee next week.