Election Day 2018: A nation on edge heads to the polls 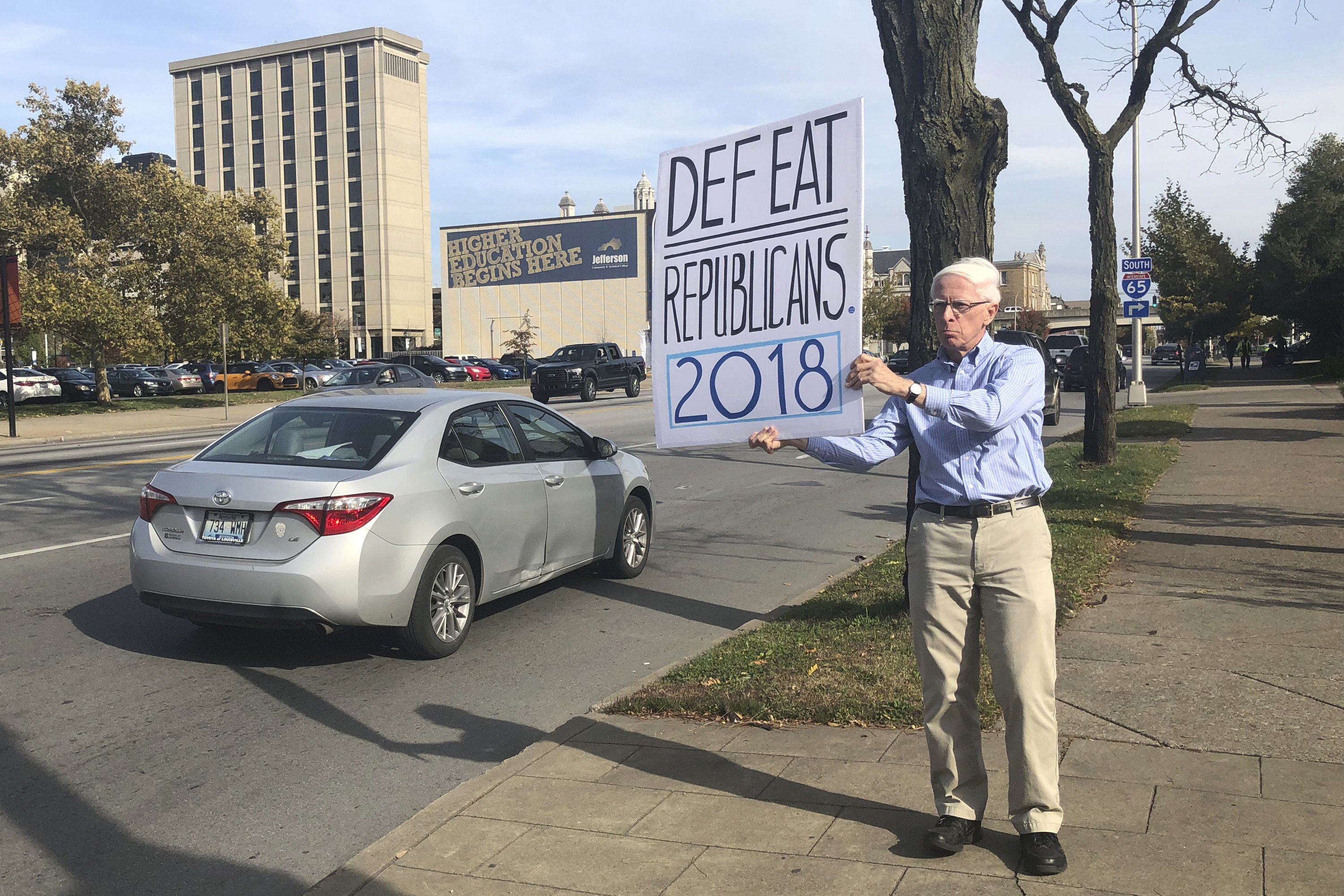 LOUISVILLE, Ky. — Michael Gregoire marched along a downtown sidewalk in the tense days before the midterm elections, waving a hand-painted sign at passing traffic: “DEFEAT REPUBLICANS 2018.”

“The survival of the country is going to depend on this election,” he said as another man stopped for a moment to argue. The strangers faced each other from opposite edges of the great American divide, Democrat versus Republican, both convinced the election is among the most consequential in their lifetimes and that they must save the nation from the other side.

“I’m voting for Donald Trump,” Stuart Kanter said. “He’s not on the ticket. But, in a way, actually he is.”

President Donald Trump looms large over Tuesday’s election, which is expected to draw historic numbers to the polls and will determine which party controls Congress. For Gregoire and Kanter, and for voters across the country, the election represents something far greater than whatever Senate and House races appear on their ballots. It is a competition for the soul of America — a referendum on Trump and the venomous political culture that many blame for gridlock in Congress and a recent spate of hate crimes and politically motivated attacks.

Less than two weeks ago in this city, a white man gunned down two African-American shoppers at a grocery store in what police described as a racially motivated attack. Days later, an avid Trump supporter was arrested for mailing pipe bombs to prominent critics of the president, all of whom Trump routinely derides as “evil” and “un-American.” The next day, another gunman opened fire in a synagogue in Pittsburgh, massacring 11 worshippers and telling police “all these Jews need to die.”

Don Albrecht, a 75-year-old accountant and Republican who voted for Trump in 2016, lives blocks away from the Louisville grocery store where two people died. He’d pulled into the parking lot minutes after the gunfire erupted, saw the police cars and shaken employees, and felt like the country’s poisonous political climate had landed in his backyard. He wishes he could take back his vote for Trump.

“He has diarrhea of the mouth and diarrhea of the brain. He’s just so irresponsible,” said Albrecht, who worries Trump’s embrace of the far-right is remaking his party. “I don’t think the American public is going to put up with it. I think there’s going to be a big backlash against Republicans because of this divisiveness.”

He’s undecided going into Election Day. He can’t remember ever voting for a Democrat but said he might this time in protest.

Other Trump voters remain staunchly behind him, and plan to choose Republican candidates to help him make good on his pledges, including vows to implement more hardline immigration policies. “I want to see the wall go up,” said Joe Spirko, 57, as he peddled Trump flags outside of one of the president’s rallies in Florida last week. “Since Trump come along, I feel a lot better.”

Trump has stepped up his rhetoric on immigration ahead of the elections, focusing on a caravan of Central American migrants heading toward the United States. Trump and his backers have called it “an invasion” — though the group of a few thousand people, including mothers and children, remains hundreds of miles away — and suggested without proof that there are criminals and terrorists in the crowd of those fleeing violence and poverty. In a White House speech, the president said he would sign an order preventing border-crossers from claiming asylum, a legally questionable proposition, and said he’d told military troops he’s mobilizing to the border to respond to thrown rocks like they were “rifles.”

A friend recently sent Hoeppner a photo of immigrants arriving at Ellis Island with a note that said: “For our ancestors, this is their caravan.” Hoeppner didn’t respond but thought to herself that her ancestors arrived legally. “Which is a big difference,” she said. “They didn’t come trying to storm the border.”

Pedro Panelo, the 21-year-old president of the College Republicans at Wheaton College in Illinois, is frustrated immigration became a last-minute political football, because the issue is more complex than what either Democrats or Republicans make it out to be. Panelo, the son of a Mexican immigrant, said migrants shouldn’t be demonized, but he stopped short of criticizing the president, and plans to vote for Republican candidates who could help push Trump’s agenda.

“When it comes to his actions, I’m not a huge fan of his tweets,” Panelo said. “But what I say is look what he’s done for the country and not always what he’s said on Twitter.”

He said he’s felt an extraordinary level of enthusiasm for this election among his fellow students. Young people, who historically sit out of midterm elections, and women are both expected to be pivotal forces Tuesday. In Georgia, Democratic campaign volunteer Adrienne White said she struggled to recruit volunteers ahead of the 2016 presidential election but that it’s been easy this year, especially among women.

In Pittsburgh, where residents just finished burying those gunned down at the Tree of Life synagogue, some voters saw their Election Day decisions as a way to send a message that the country is headed down a dark and dangerous path.

“This is probably the most important election in the past 100 years. This will turn the tables,” said Barbara Villa, 71, who with her husband planted a crop of “Vote Blue” signs outside their home.

Rose Cathleen Bagin, 77, lives in the same neighborhood as the synagogue. She lashed a sign to her front porch reading “VOTE FOR GUN CONTROL,” and she is stunned every time she sees the crowd at Trump rallies on television cheering for his divisive language.