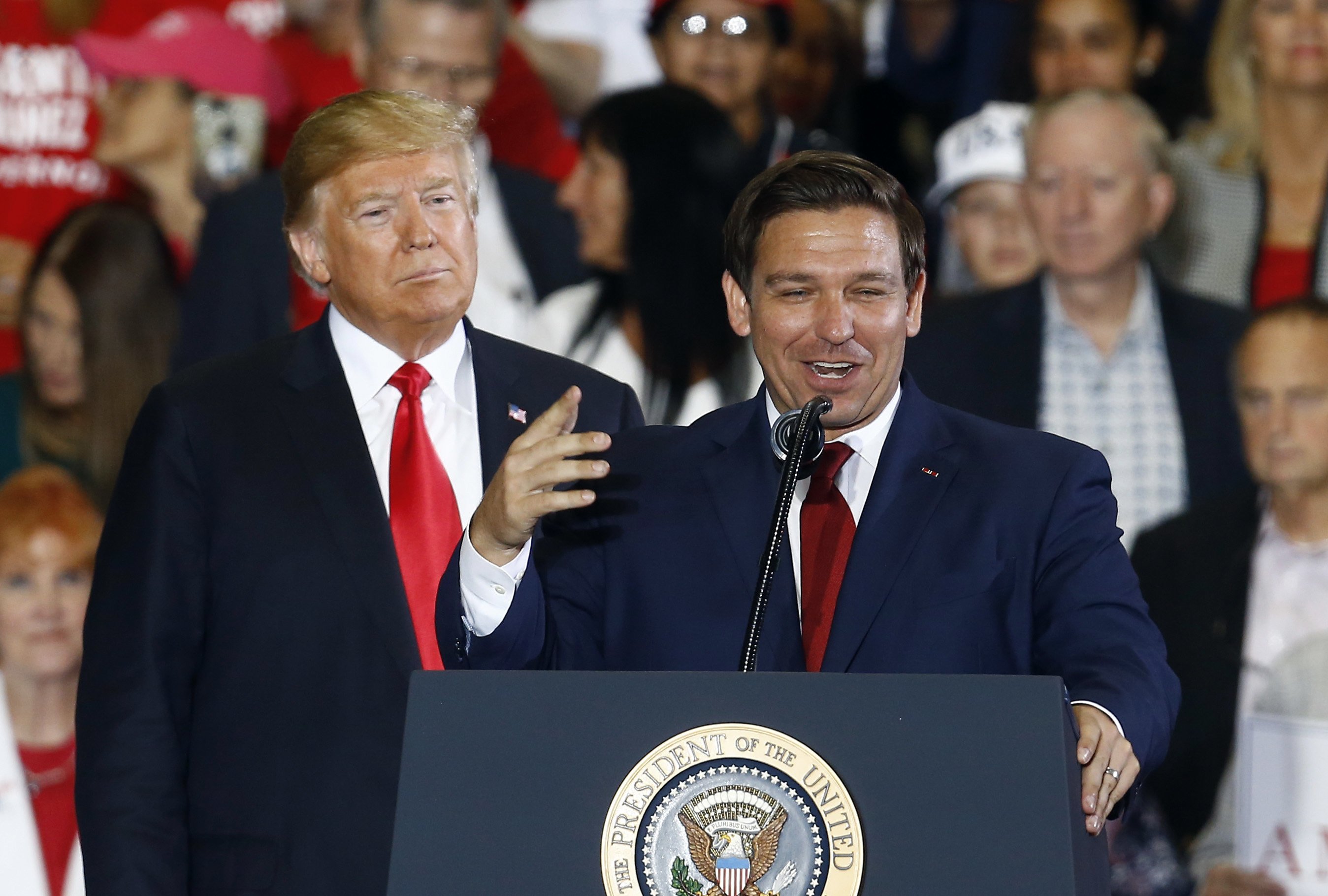 TALLAHASSEE, Fla. — Floridians will choose between one of President Donald Trump’s most vocal supporters and an unabashed liberal when they elect a new governor Tuesday.

The contrast couldn’t be greater between Republican former U.S. Rep. Ron DeSantis and Democratic Tallahassee Mayor Andrew Gillum, who would be Florida’s first black governor and the first Democrat elected to the office since 1994.

The two are opposites on issues, background, campaign style and message in a politically divisive year. The contest is essentially a referendum on Trump and votes may be cast as much, if not more, on emotion than issues. About the only thing they have in common is they both have preschool children and they were born a year apart.

“He’s for Trump,” Marc Grizzard, 51-year-old church pastor from Live Oak, said when asked the most important reason he is supporting DeSantis. “There ain’t no need to get somebody in there, even if they are Republican, if they aren’t going to support the president.”

Toni Pentecouteau, a 72-year-old retiree from Destin, is supporting Gillum and cites, in part, DeSantis’ close relationship with Trump.

“I can’t vote for someone who has to ask Trump first if it’s OK,” she said. “We have a president who violated federal and state housing laws, who has bankrupted many times, who has been sued, who doesn’t pay his creditors.”

When the year began, few would have predicted a showdown between DeSantis and Gillum.

DeSantis was the underdog in the Republican primary until Trump endorsed him and Gillum shocked political observers when he won a crowded primary despite spending far less money, largely on grassroots support of Democrats who call themselves progressives.

DeSantis, 40, was educated at Yale and Harvard universities before becoming a Navy officer. He won his House seat in 2012 running as a political outsider, but he clearly had larger ambitions. He ran for U.S. Senate in 2016, dropping out when Republican U.S. Sen. Marco Rubio decided to seek re-election.

Gillum, 39, was a 23-year-old Florida A&M University student when he became the youngest person elected to Tallahassee’s city council. He was elected the city’s mayor in 2014. He tells a story about a poor upbringing in Miami, and the lessons he learned about getting a good education from his mother and grandmother.

At campaign events, DeSantis has unleashed a largely negative message about Gillum and sometimes comes across as angry, while Gillum barely mentions DeSantis and has an upbeat, positive style.

During a rally in Destin, Gillum mentioned pipe bombs that were mailed to Democratic leaders, allegedly by a Trump supporter, in talking about political division.

“The beauty is, I believe there are more of us than there are of them. There are more of us who believe in decency,” Gillum said to loud applause. “We can win these races not by dividing people, but by bringing folks together to give them something to vote for, and not just against.”

The event ended with the crowd chanting Gillum’s campaign slogan, “Bring it home!”

That same night, DeSantis was giving thousands gathered at a rally with Trump several reasons to vote against Gillum, citing an FBI investigation into corruption at Tallahassee City Hall among other issues.

“I’m proud to say that of the candidates running for governor, I’m the only one that has worn the uniform and served in our military, I’m the only candidate that ain’t going to raise your taxes here in Florida and I’m the only guy who can credibly say that I’m not under investigation for corruption by the FBI,” DeSantis said to cheers.

DeSantis used more than half of his speech to attack Gillum. At one point the crowd began chanting, “Lock him up!”

Gillum has said he’s not a target of the investigation.

Racial division has also been an issue in the campaign. The day after the primary, DeSantis said on Fox News that Florida voters shouldn’t “monkey this up” by electing Gillum. DeSantis spent weeks explaining the remark, saying it had nothing to do with race, but rather his belief that Gillum will hurt Florida’s economy.

The Gillum campaign, in the final week, cut ties with a campaign volunteer caught on video calling Florida a “cracker” state and saying the campaign was taking advantage of “white guilt.”

Gillum is taking a nontraditional route in the general election. He’s seeking out young voters and minorities who tend to have lower turnout in a midterm election.

“They told me this was a red county!” Gillum said after being greeted with thunderous applause from an overflow Okaloosa crowd. “I see a sea of blue. In fact, I see a tsunami of blue about to slip over this area.”

DeSantis largely focused his campaign on the Interstate 4 corridor that runs from Daytona Beach to through Orlando to Tampa Bay and the large urban areas south of the highway.

If DeSantis wins, he can give Trump credit for exciting the party’s base. When DeSantis wrapped up his speech at Wednesday’s Trump rally, he turned to the president and shook his hand.

“I appreciate it. Thanks,” DeSantis told Trump. He then laughed and added, “This is crazy. This is awesome.”