Synagogue attack a reminder of how common hate crimes are 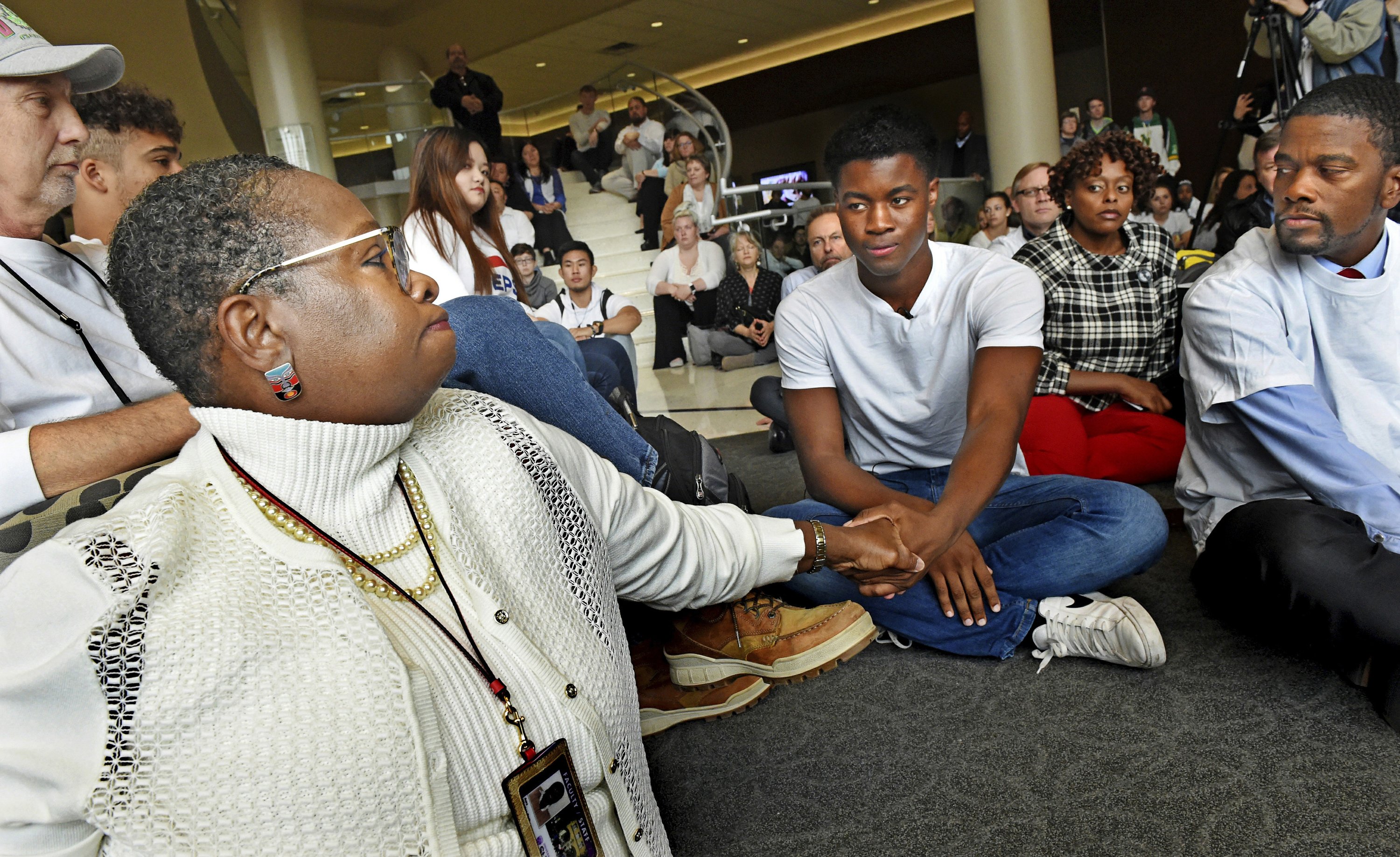 Kevyn Perkins stopped cold when he saw the letters scrawled on the door to his dorm: “N—– go back” it said, inked in messy red marker. First he was blinded by confusion. Then rage. And then all he could think about was dropping out, finding a new school, escaping for good.

“I thought maybe I don’t belong here. So I called my brother and I said, ‘pick me up,’” said Perkins, 19, a freshman at the University of St. Thomas, a private and mostly white school in St. Paul, Minnesota. “He said that’s what they want you to do — you have to stay there and stay strong.”

Often overlooked amid the recent intense spasms of hatred — 11 dead in Pittsburgh synagogue, two African-Americans gunned down in a Kentucky grocery store, 13 mail bombs sent to prominent Democrats — are nearly daily flashes of hate that are no less capable of leaving their victims with deep and permanent emotional wounds.

In October alone, there were dozens of examples of the kind of hatred that smolders without ever reaching national attention. It stretched from coast to coast, targeting victims because of their race, religion, sexual orientation, gender and myriad other differences.

An Indiana woman was arrested last week after leaving a racist letter directed at African-American neighbors, urging them to leave the neighborhood because black people weren’t welcome. As early voting started in North Carolina, a black Republican volunteer was accosted with slurs and had a gun pulled on him at a polling place, leading to one man’s arrest. An Uber passenger in Colorado was arrested after threatening his Middle Eastern driver and chasing him down the street because police said he “hated all brown people.” Violent clashes broke out in New York City after a speech by the founder of a far-right group, leading to three arrests.

In a Texas courtroom, a man was sentenced to 24 years in prison on Oct. 17 for torching a mosque near the U.S.-Mexico border last year because of what authorities said was a “rabid hatred” of Muslims. In sending the arsonist to prison, Judge John Rainey declared: “This must stop. It is like a cancer to our society,” adding that incidents like this create “fear all over the world.”

Anti-Defamation League CEO Jonathan Greenblatt said xenophobic rhetoric is feeding the anxiety of the current political moment, and that anxiety is prompting fear and promoting resentment and “all the worst impulses.”

“We’re living in a moment where hate crimes are on the rise,” said Greenblatt. “We need more than ever for our leaders to ratchet back the rhetoric. People feel like they’re on edge across the country.”

President Trump’s critics have accused him of fanning the flames with his divisive political rhetoric — something the president pushed back against Friday. He put the blame back on reporters for “creating violence” with fake news stories.

Several cases happened on college campuses, which strive to reflect the nation’s diversity but sometimes attract its intolerance.

At more than 40 colleges, racist flyers or stickers were found posted on campus in October, according to the Anti-Defamation League, which has reported a surge in activity by white supremacist groups since Trump took office.

At the College of the Holy Cross in central Massachusetts, a student was beaten in an assault that officials say was motivated by the victim’s sexual orientation. No one has been arrested in connection with the crime.

Students at DePauw University in Indiana reported four separate cases of hate speech in October. In three, racial and homophobic slurs and threats were yelled from cars passing by campus. In another case, a threat with the N-word was found in an elevator on campus.

Anti-Semitic posters appeared at the University of California, Davis, blaming Jews for allegations of sexual assault that were made against Justice Brett Kavanaugh. Several Jewish groups on campus wrote a letter demanding a stronger response from the school’s administration, saying Jews on campus have faced mounting prejudice in recent years.

“Anti-Semitism is very real and alive on our campus,” the letter said. “Jewish students should not have to be scared of walking on campus. Students are choosing not to openly identify as Jews through our clothing.”

For Perkins, the red lettering marred the image of the friendly, welcoming campus that was sold to him by college officials.

The incident led to a student protest that prompted the school to cancel class for a town hall meeting discussing racial tensions on campus.

Since he found the note Oct. 19, Perkins has become more withdrawn, he said, less outgoing. And although he decided to stay at St. Thomas, he’s left to wonder who on campus felt such hatred for him, and why.

“I’m already the odd one out, and the words, the hatred behind it really made me mad,” he said. “Degrading someone based on the color of their skin, I just couldn’t understand why someone would do that.”