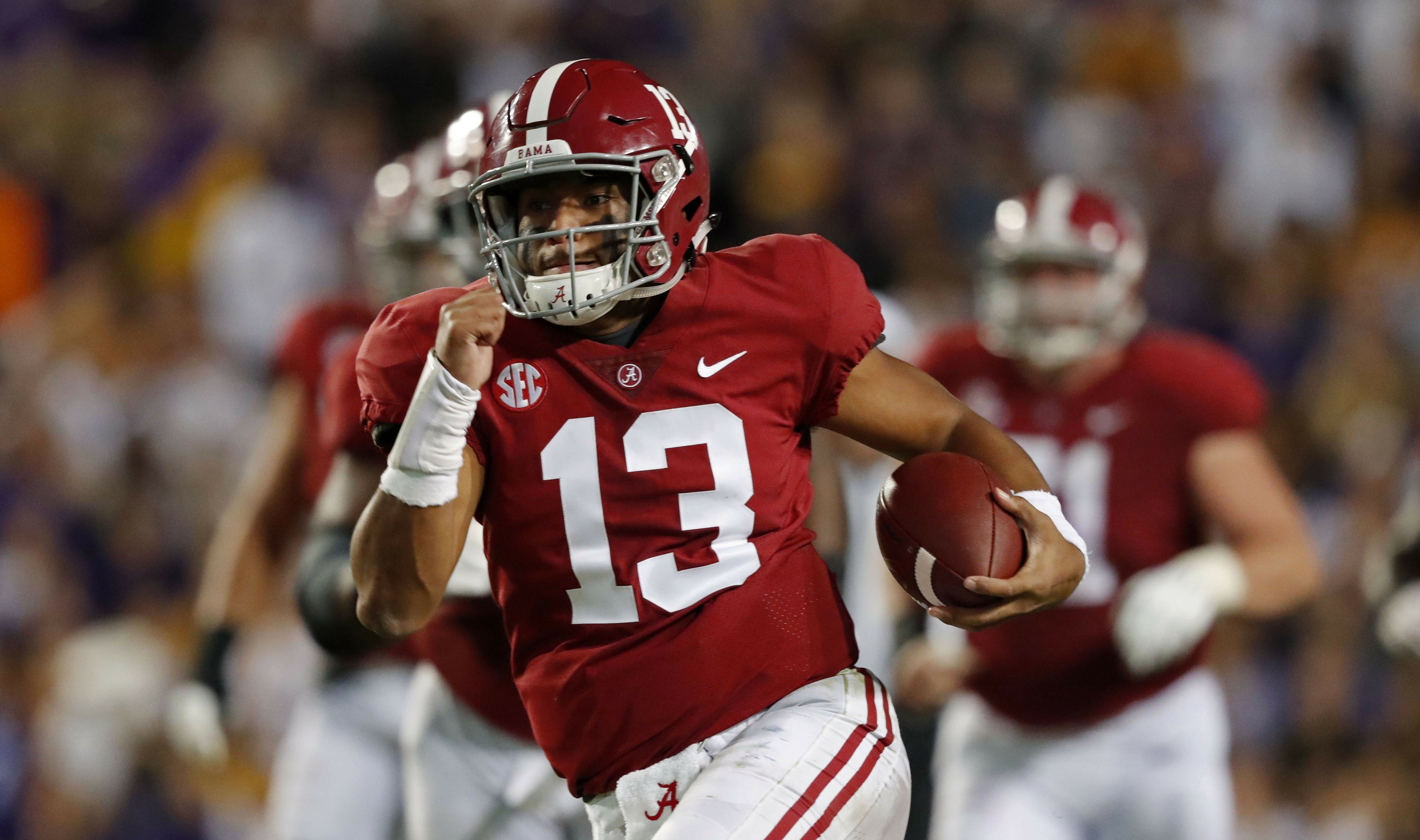 BATON ROUGE, La. — Alabama quarterback Tua Tagovailoa looked untethered by the brace on his right knee when he galloped for a 44-yard touchdown.

He looked unfazed by the first interception he’d thrown all season, responding minutes later with passes of 29 and 25 yards for a two-play scoring drive shortly before halftime.

Tagovailoa threw two touchdown passes to go with his long scoring run in what was supposed to be his toughest test this season, Alabama’s defense stifled No. 4 LSU, and the top-ranked Crimson Tide remained unbeaten with a 29-0 victory Saturday night.

Alabama (9-0, 6-0 SEC, No. 1 CFP) had no victories over a team currently ranked in the top 20 entering Death Valley. But if there were any questions about the Tide’s ability to handle a highly ranked team in a hostile environment, they’ve been answered resoundingly.

Tagovailoa was 25-of-42 passing for 295 yards and moved as well as he needed to, particularly when he sprinted up the middle of the field or his long TD run in the third quarter to give Alabama a 22-0 lead.

Tagovailoa limped off the field after that play, went into the medical tent briefly and rode a stationary bike on the sideline, but returned for the next series.

“I’d seen the opening, I ran. I was just trying to get the first down,” Tagovailoa said. “Once I passed the 30, though, I felt my leg (hurting) and I was going off momentum after that.”

“Alabama overpowered us,” LSU coach Ed Orgeron said. “When you max-protect and you’re doing everything you can with protection and they’re beating you, you’ve got to look at personnel. You’ve got to get better. I don’t think it was scheme at all. … There was nothing we could do about it.”

Tigers quarterback Joe Burrow completed 18 of 35 passes for 184 yards. He was sacked five times and had a late pass intercepted in the end zone by linebacker Mack Wilson. Nose guard Quinnen Williams finished with 2 1/2 sacks. Lineabckers Anfernee Jennings and Christian Miller each had one. Alabama held the Tigers to just 12 yards rushing.

“It was crazy for us to actually shut them out,” Alabama linebacker Dylan Moses. “I wasn’t expecting it, but that was a goal for us to get that done.”

Alabama finished with a 576-196 advantage in total yards in beating LSU for the eighth straight time.

“We weren’t even close to them tonight,” Orgeron said.

Alabama: The best defense Alabama has faced this season wasn’t good enough on its own field to stop the Tide from gashing it for eight plays of 20-plus yards, or from covering a two-touchdown spread by two TDs.

“It shows what kind of things we can do against basically anyone,” Tagovailoa said.

LSU: The Tigers have had to shuffle their offensive line much of the season, and struggled to match the Tide physically at the point of attack. Guard Garett Brumfield tried to come back for the first time in four games, but struggled and was intermittently replaced by Chasen Hines to start the second half.

While nothing changes for Alabama, LSU could tumble considerably in the AP Poll after being dominated at home.

Damien Harris rushed for 107 yards on 19 carries, including his 1-yard TD run, for Alabama. Najee Harris gained 83 yards on the ground, 29 on one carry.

Jerry Jeudy caught eight passes for 103 yards and Irv Smith Jr. had four catches for 64 yards, including a 25-yard touchdown grab late in the first half.

“I was really, really pleased with the explosive plays we were able to make,” Saban said.

Henry Ruggs III caught four passes for 55 yards and scored the first touchdown of the game, but injured his left leg late in the second quarter. Saban said X-rays were negative but further evaluation was pending.

Tagovailoa’s interception came on a deep throw down the middle, which Todd Harris Jr. hauled in for his first career pick while falling to the ground at the LSU 4.

“That was a good play by the DB,” Tagovailoa said. “I should have never made that decision.”

The Tiger Stadium crowd erupted, as it appeared the turnover might get LSU to halftime down by no more than nine points, perhaps less, if the Tigers could move the ball.

But the Crimson Tide’s response was emphatic. Burrow was sacked inside the 1, and LSU had to punt shortly afterward.

Alabama got the ball back on its 46 and Tagovailoa needed just two plays — a 29-yard pass to Jeudy, followed by his scoring strike to Smith — to widen the Tide’s lead.

LSU travels to Arkansas on Saturday.