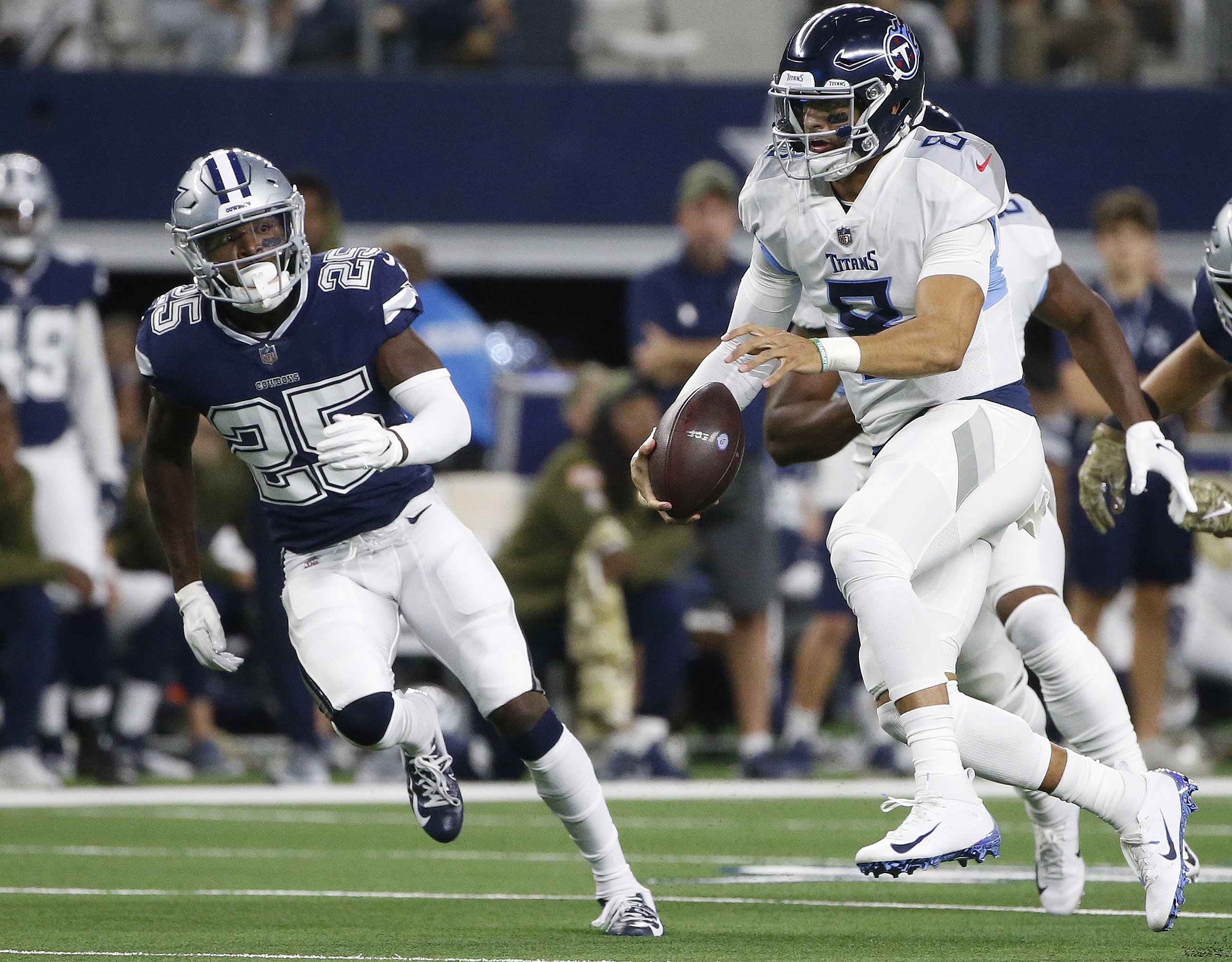 The flashback for the Dallas Cowboys was just as disheartening as the original.

Byard mimicked Terrell Owens’ mocking celebration on the star logo at the 50-yard line from 18 years ago, Marcus Mariota accounted for three touchdowns and the Titans spoiled Amari Cooper’s Dallas debut with a 28-14 victory on Monday night.

The end-zone pick of Dak Prescott came after Mariota fumbled on the first two Tennessee possessions. Just as T.O. did at old Texas Stadium 18 years ago, Byard ran to midfield, under the huge videoboard at spacious AT&T Stadium, and spread his arms.

Owens did it twice in a blowout San Francisco win over a bad Dallas team that time. This win by the Titans (4-4) ended their three-game losing streak while handing the Cowboys (3-5) their first loss in four home games and making their road to the playoffs a difficult one.

The Cowboys looked like the team headed for a blowout win, but led just 7-0 after Mariota’s early miscues because of Brett Maher’s missed 38-yard field goal and Prescott’s ill-advised throw into double coverage.

Cooper scored the first Dallas touchdown and finished five catches for 58 yards after coming over from Oakland in a trade for a first-round pick during the open week.

Given another chance when what would have been a third straight fumble to start the game was overturned by a review that showed Luke Stocker didn’t have the ball long enough on a catch, Mariota led an 80-yard drive capped by Derrick Henry’s 1-yard plunge for a 7-7 tie.

Then the Titans took control on offense in the second half, converting 11 of 14 third downs.

The Cowboys fell flat in 15-year tight end Jason Witten’s first trip home since retiring to become lead analyst for “Monday Night Football.” Dallas had just 108 yards in the second half — the bulk of those on a desperation drive down two scores late — and was booed several times at the end of failed drives.

After getting sacked on third down with nobody realizing Tennessee had called timeout in a 7-7 game in the second quarter, Mariota completed a 36-yarder to Darius Jennings before a screen pass to Dion Lewis went 18 yards for a touchdown.

Mariota broke a 14-14 tie in the third quarter when he pulled the ball out of Lewis’ gut at the last second and delivered a 7-yard shovel pass to Jonnu Smith to put the Titans ahead for good.

Mariota was 21 of 29 for 240 yards without an interception and had 32 yards rushing. Lewis had 62 yards rushing and 60 receiving coming off a career-high 155 scrimmage yards in his last game.

Star Dallas running back Ezekiel Elliott finished with 61 yards after a hot start. Prescott was 21 of 31 for 243 yards and two scores — 4 yards to Cooper and 23 yards to Allen Hurns.

There was something else familiar about Byard’s celebration: a Dallas defender trying to do something about it.

George Teague famously knocked Owens off the star back then, and Cowboys cornerback Byron Jones made a similar move on Byard and the group that joined the celebration. Owens seemed to get a kick out of the whole thing on Twitter.

The Cowboys paid tribute to Witten with a pregame video on the giant board hanging over the field. The franchise leader in games, catches and yards receiving wiped his eyes when a small inset of him was shown during the video, but seemed to have gained his composure when he was shown on the full screen. Witten waved, smiled and tapped his chest around his heart several times as the crowd roared.

Elliott and Mariota were inside AT&T Stadium together for the first time since Elliott rushed for 246 yards and four touchdowns to lead Ohio State to a 42-20 win over Mariota and Oregon for the 2014 national championship.

Dallas LB Sean Lee pulled up with a hamstring injury while trying to cover Smith on a 26-yard completion to the Titans tight end. Lee went the locker room not long after coming off the field. … Titans RT Jack Conklin was being evaluated for a concussion. … Titans WR Tajae Sharpe, who appeared to get injured during warmups but played, limped off the field after a catch in the third quarter but returned on the next series.

Cowboys: At Philadelphia next Sunday in the first meeting with the NFC East rival.