The Latest: In Georgia, Kemp has trouble with voter card 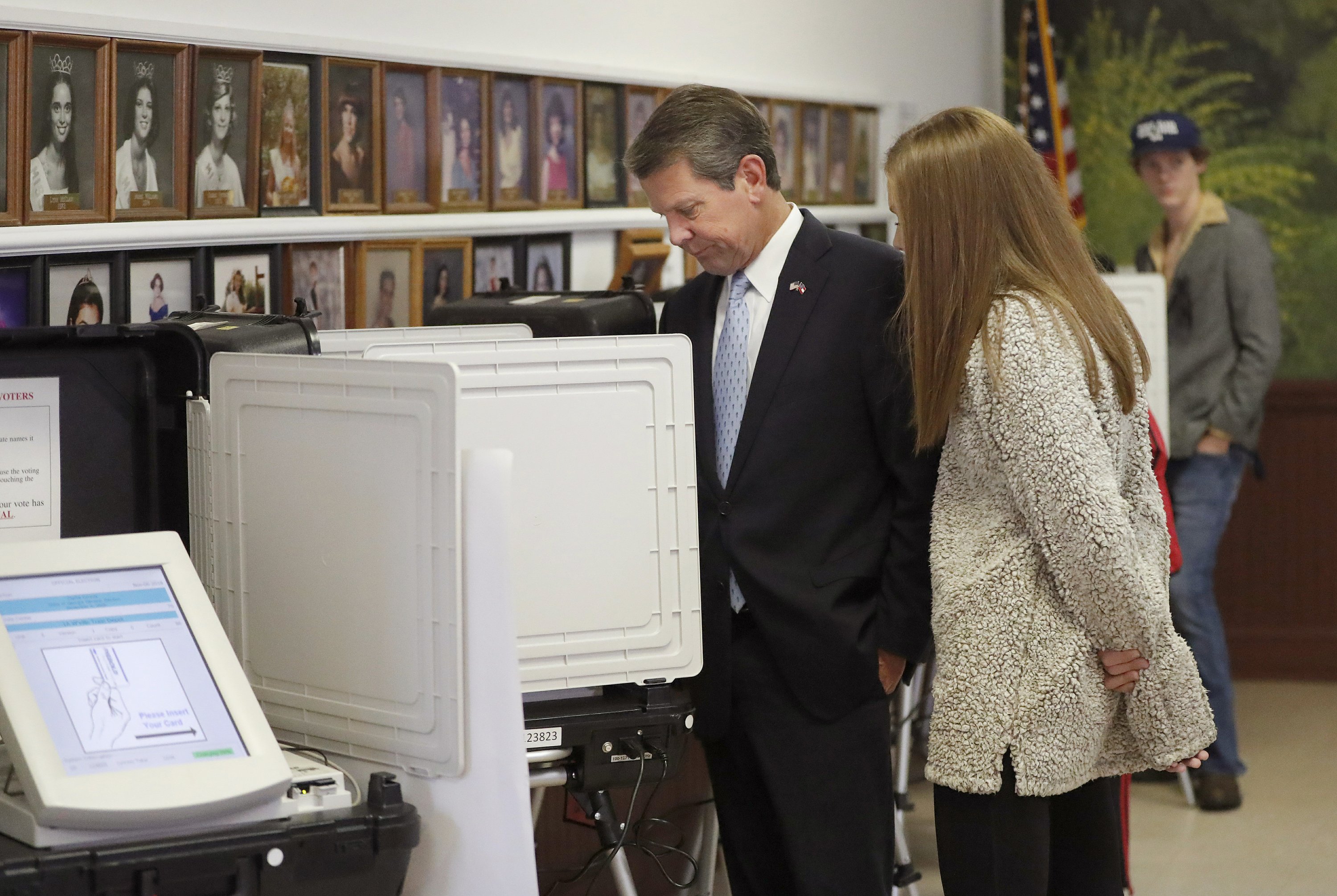 ATLANTA — The Latest on voting problems in the midterm election (all times local):

Georgia Republican gubernatorial candidate Brian Kemp — who is also in charge of the state’s election — had problems voting.

The Georgia governor’s race is one of the most closely-watched in the country, due in part to an ongoing dispute over Kemp’s management of the election system.

Kemp had an issue with his voter card when he went to cast his ballot, but it was fixed quickly. He walked by reporters and said: “Take Two.”

There have been widespread reports of technical malfunctions and long lines at polling stations across the state.

Over the weekend, a private citizen alerted the Georgia Democratic Party and a private attorney of potential vulnerability in the online voter database that Kemp oversees in his current job as secretary of state.

Kemp later announced, without providing any evidence, that he was launching an investigation into Georgia Democrats for “possible cybercrimes.”

Volunteers from across the country are in Dodge City, Kansas, to help voters get to the city’s only voting site after it was moved outside the city limits.

Matias Rico told The Topeka Capital-Journal that he came from San Diego with his cousin to give rides to anyone who couldn’t get to the polling place.

Volunteers from Kansas City, Missouri, and New York City were among those giving rides to voters. Three women from Lawrence rented a chartered bus to help with transportation.

Ford County received national attention when County Clerk Deborah Cox moved Dodge City’s only polling place to the Expo Center because the previous site, the Civic Center, was scheduled to undergo construction. The new site is more than a mile from the nearest bus stop.

The city is predominantly Hispanic and has 13,000 registered voters.

By Tuesday afternoon, the nonpartisan Election Protection hotline had received some 17,500 calls from voters experiencing problems at their polling places.

Kristen Clarke, president of the Lawyers’ Committee for Civil Rights Under Law, which helps run the hotline, says that is on par with the number of calls received during a presidential election. The hotline had received about 10,400 calls by the same time during the last midterm election in 2014.

Clarke says most reports of voting problems were connected to malfunctioning voting machines.

A deputy in Harris County, Texas, has cited a poll worker for misdemeanor assault after she allegedly bumped a voter during an argument and made a racist comment.

The Harris County Sheriff’s Office said on Twitter that the deputy responded Tuesday morning to a disturbance call at a polling site in Houston.

The Houston Chronicle reports the dispute began over a discrepancy with the voter’s address. The confrontation escalated and the worker, who is white, made a racist comment to the voter, a black woman. Witnesses confirmed to the newspaper that the worker said, “Maybe if I’d worn my blackface makeup today you could comprehend what I’m saying to you.”

The election judge at the site separated the two. Harris County authorities are investigating the matter.

A man is accused of threatening to shoot workers at a western Pennsylvania polling place after they told him he wasn’t registered to vote.

Washington county assistant elections director Melanie Ostrander says Quinn came to the South Franklin Volunteer Fire Department in South Franklin Township at about 9 a.m. Tuesday. She says he became irate when he was told he wasn’t registered to vote.

Ostrander says the man allegedly “became upset, told the poll workers he was going to go get a gun and come back and shoot them.”

Court documents don’t list an attorney for Queen and a phone number listed in his name rang unanswered before disconnecting Tuesday.

Homeland Security Secretary Kirstjen Nielsen says cybersecurity officials are hoping for the best in the midterm election but preparing to react to the worst.

Nielsen says that the election will be the most secure in the modern era. She was speaking Tuesday at a command center where state and local officials are working with federal agents to share information on possible interference from foreign or domestic agents.

States run elections, but Homeland Security is the federal department tasked with both cybersecurity and protecting the country’s election infrastructure.

Voters were managing long lines and malfunctioning machines, but those problems weren’t because of any foreign interference.

Nielsen says no voting machines have been compromised, but there has been a misinformation effort by foreign groups eager to sow discord.

A judge has ordered 12 polling places in a northwestern Indiana county to stay open late after voting didn’t start as scheduled.

The Republican clerk blamed that on some expected poll workers quitting, some workers not picking up election supplies and sites not being open when poll workers arrived.

Millions of Americans are casting votes Tuesday, and some are running into long lines, machine problems and other snafus.

Turnout was so heavy Tuesday morning at one packed precinct on Manhattan’s Upper West Side that the line to scan ballots stretched around a junior high school gym.

Poll workers told voters that two of the roughly half-dozen scanners were malfunctioning.

In Brooklyn, voters arriving at two separate polling stations discovered that most scanners had broken down.

Veronica Vela said half of the scanners were broken at one of the polling sites in Crown Heights and waited two hours to vote. By that time, none of the machines were working.

Vela said she was forced to drop her ballot in an “emergency ballot box.”

The U.S. Border Patrol has canceled a “crowd control exercise” in Texas following criticism from civil liberties groups that it could dissuade people from voting.

Border Patrol agent Fidel Baca confirmed Tuesday that the exercise in a Latino neighborhood of El Paso was canceled, but declined to say why.

The Texas Civil Rights Project says the exercise, billed by the Border Patrol as a “mobile field force demonstration,” was to be held within a half-mile of a polling site.

The group is seeking an explanation from federal authorities about the intention of the exercise.

The group says in a statement that President Donald Trump “has drummed up anti-immigrant sentiment” and the exercise is “part and parcel of those efforts.”

Voters in an Atlanta neighborhood arrived at a library that’s been their polling site for years to find a car with two signs on its windshield that said in indelible markers, “NOT A VOTING LOCATION.”

Jessica Olson says she’s lived in the midtown neighborhood near the library polling place where she’s voted for nearly 10 years. Suddenly this year, she was told she isn’t supposed to vote here — she’s to go to a church nearly two miles away.

In this pedestrian neighborhood, many walk to the polls.

Fulton County said in a statement that the change was made in early 2018 because the library will close for renovations.

At the new polling site at the church, 26-year-old Mylandria Ponder says she’s been waiting an hour and 20 minutes, and is now leaving.

Across Georgia, multiple polling stations were reporting long lines, with the wait as long as three hours in some sites

A Florida polling place was put on lockdown for about 40 minutes after a man with a gun was reported in a nearby parking lot.

Palm Bay Police Lt. Steve Bland said passers-by getting into their cars on Tuesday saw the man sitting in his vehicle with a gun on his lap. They called 911 and police arrived as the man was driving out of the parking lot.

Bland said the man was in mid-eighties and did not make any threats. He says the gun wasn’t loaded.

Bland said the lockdown was a precaution, and the man was taken for a mental health evaluation but he was not arrested.

Supervisor of Elections Lori Scott said voters were not diverted to another site because the incident was resolved quickly.

Voting in a Rhode Island community only accessible by ferry was interrupted briefly after the sole voting machine on the island malfunctioned.

The Rhode Island Board of Elections tweeted at about 9 a.m. Tuesday that the machine on Prudence Island “experienced a technical difficulty.”

A new machine was ferried over and the board said the polling place is operating normally and all ballots have been counted.

Prudence Island in Narragansett Bay is part of the town of Portsmouth and has a population of about 200.

Rhode Islanders are voting in a three-way race for governor, and for congressional seats.

Federal and state officials have been working for nearly two years to shore up the nation’s election infrastructure from cyberattacks by Russians or others seeking to disrupt the voting process.

It turns out that many of the problems are closer to home.

Officials have identified a number of problems during early voting, from machines that changed voter selections to registration forms tossed out because of clerical errors.

Election officials and voting rights groups fear that voter confidence in the results could be undermined if such problems become even more widespread on Election Day, as millions of Americans head to the polls to decide pivotal races for Congress and governor.