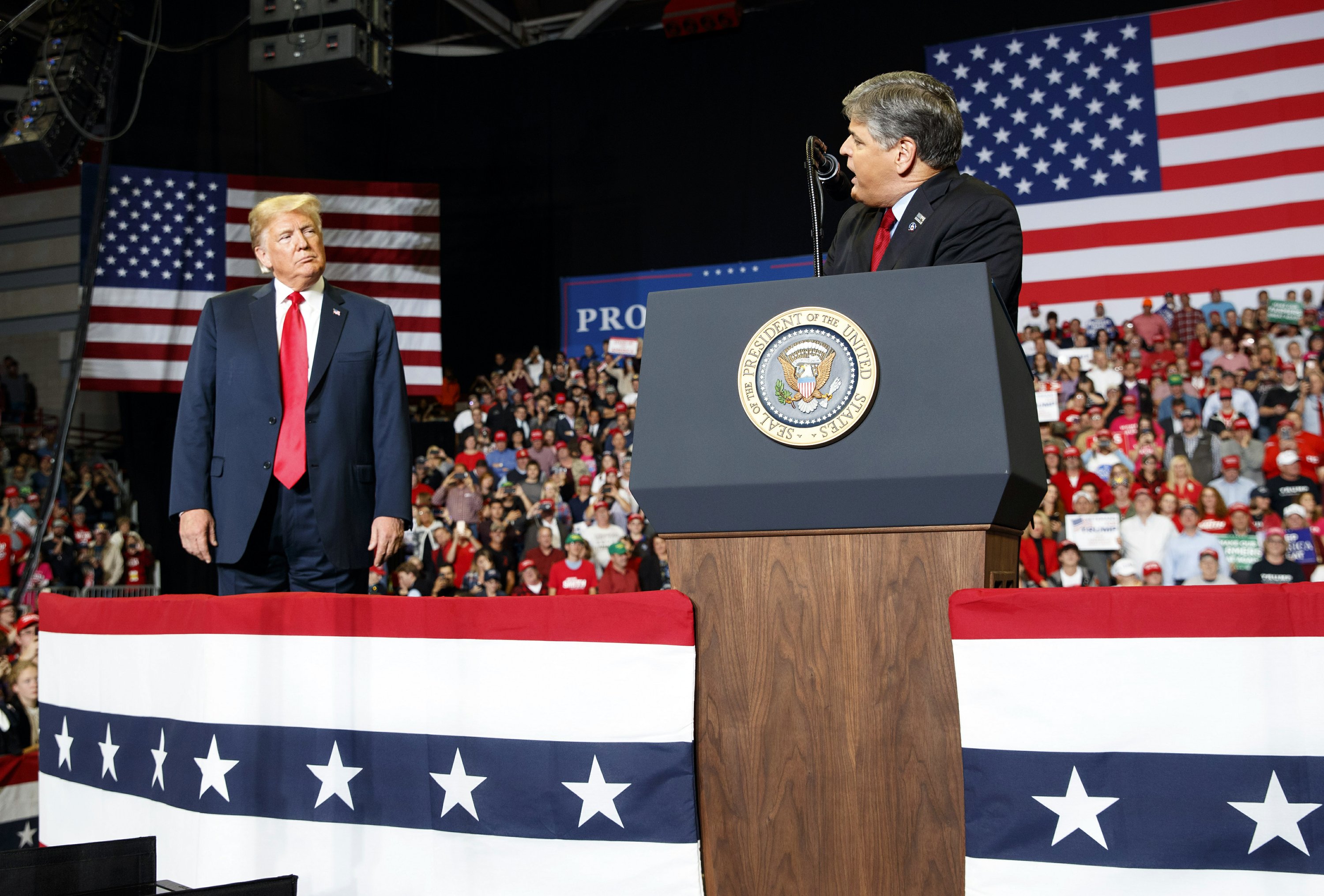 NEW YORK — Sean Hannity spoke from the stage of President Donald Trump’s last midterm election rally on Monday, after Fox News Channel and its most popular personality had insisted all day that he wouldn’t.

Hannity appeared on the podium in a Missouri arena after being called to the stage by Trump. Another Fox News host, Jeanine Pirro, also appeared onstage with the president.

“By the way, all those people in the back are fake news,” Hannity told the audience.

It was an extraordinary scene after the news network had worked Monday to establish distance between Hannity and the campaign. Trump’s campaign had billed Hannity as a “special guest” at the rally, but Fox had said that wasn’t so. Hannity himself had tweeted: “To be clear, I will not be on stage campaigning with the president. I am covering final rally for the show.”

But Trump called him to the stage after saying, “they’re very special, they’ve done an incredible job for us. They’ve been with us from the beginning.”

Hannity hugged the president when he came onstage and, after echoing Trump’s traditional epithets about the media, recited some economic statistics.

A Fox News spokeswoman did not immediate return a message seeking comment.

“Either Fox News lied all day about their direct collaboration with the Trump campaign, or the network simply doesn’t have any control over Sean Hannity,” said Angelo Carusone, president of the liberal media watchdog Media Matters for America, which has urged an advertiser boycott of Hannity in the past. “This is a problem. It’s dangerous for democracy and a threat to a free press.”

Hannity has been rebuked by Fox in the past. In 2016, he was part of a Trump political video, which Fox said it had not known about in advance and told Hannity not to do so again. When Fox found out in 2010 that the Tea Party had advertised that Hannity would be appearing at one of his fundraising rallies, Fox said it had not approved the arrangement and ordered him back to New York.

Monday’s rally appearance was not shown on Fox News Channel, but was aired on C-SPAN.

It came after Hannity’s prime-time show aired from the rally site. He played the role of cheerleader from the side as the crowd waited for Trump’s appearance. He pleaded with viewers to vote Republican on Tuesday to support Trump, and his opening monologue echoed a campaign slogan seen on signs at the arena: “Promises made, promises kept.”

He moved backstage, and with six minutes before the end of his show, Trump appeared for a billed interview that was largely bereft of questions. Trump told Hannity he had seen the beginning of his show.

“I never miss your opening monologue,” he said.

Hannity’s role at the rally had been put in question by Trump campaign itself. It announced on Sunday that Hannity was to be a guest, along with radio commentator Rush Limbaugh and singer Lee Greenwood. Fox said it did not know how that impression had been created and Michael Glassner, chief operating officer for the campaign, did not respond to a request for comment.

Despite Fox’s disavowal, the Trump campaign continued to list Hannity as a guest throughout Monday at the link where people could seek tickets to the event.