Broken machines to threats of violence among voting problems 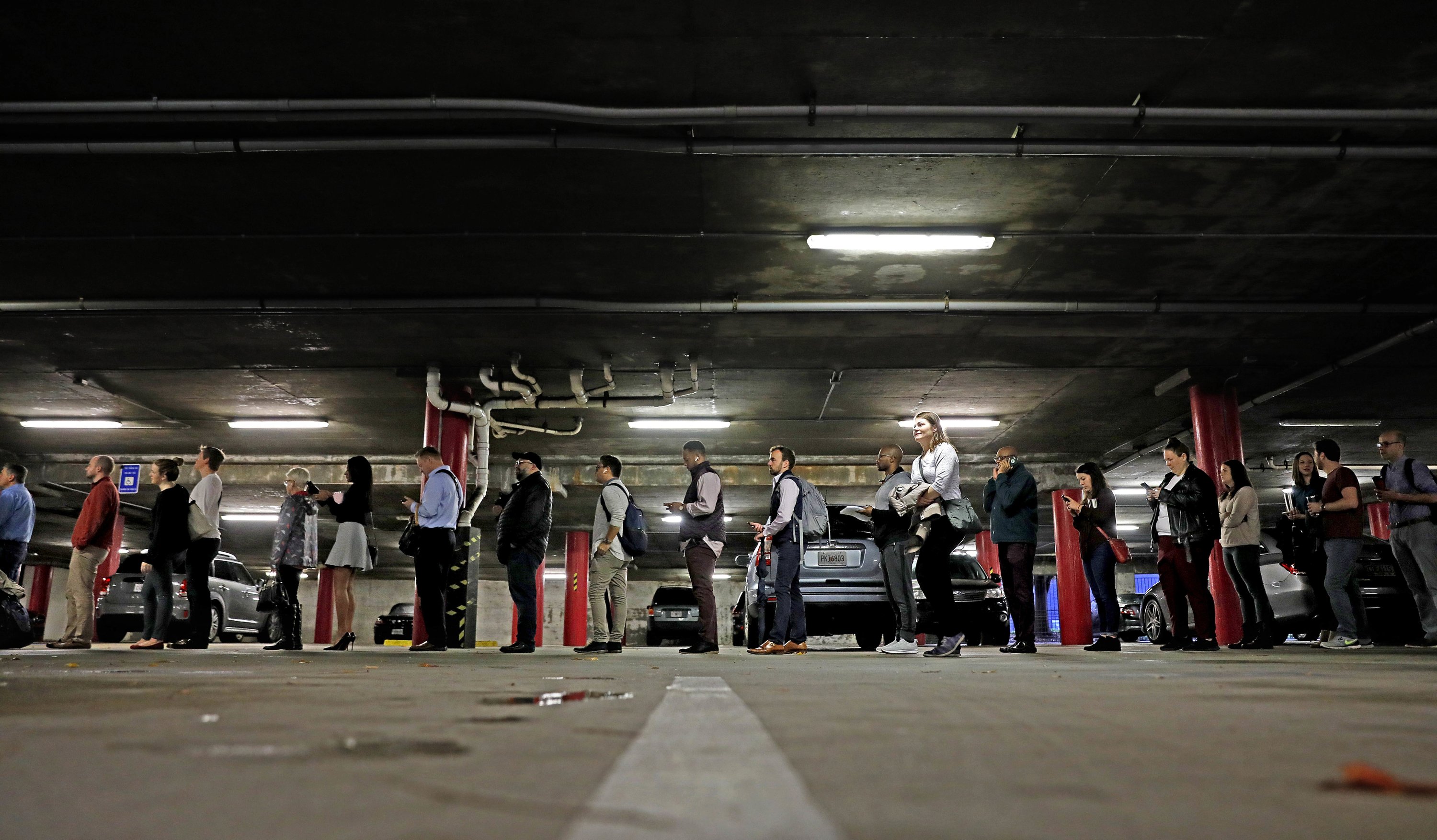 Voting machine glitches, long lines and misinformation were among the problems that voters faced at the polls on Tuesday.

The cause of the problems ran the gamut from human error to threatened violence to technological errors to Mother Nature as storms pummeled several states in the South.

The issues added more chaos to a bitterly fought election that will decide who controls the Senate, House and hundreds of down-ticket races.

Here’s what you should know about Election Day voting issues:
___

Long lines and malfunctioning machines marred voting in some precincts across the U.S. Some voters reported waiting up to three hours to vote, with some of the biggest problems in Georgia and New York.

In South Carolina, a woman said she called 911 after waiting outside her polling place for 45 minutes to get help because she’s disabled.

Not even Georgia’s state election boss was immune from voting problems.

Secretary of State Brian Kemp, who is also the state’s Republican gubernatorial candidate, had an issue with his voter card when he went to cast his ballot, but it was fixed quickly. He walked by reporters and said: “Take 2.”

The Georgia governor’s race is one of the most closely watched in the country, due in part to an ongoing dispute over Kemp’s management of the election system. Kemp has resisted calls from former President Jimmy Carter and others for him to step down from overseeing the election that he is running in.

In South Carolina, Sandy Hanebrink told the Anderson Independent-Mail she couldn’t make it inside her polling place because she can’t walk on the gravel or grass where vehicles have to park. Hanebrink said she tried to flag down poll workers and call Anderson County’s election hotline before dialing 911. Poll workers went out after she made her call.

Poll manager Michael Bratcher said workers were unaware people were waiting outside and he didn’t have enough workers to monitor voters inside and possible curbside voting outside.
__

Voting was mostly peaceful across the country on Tuesday, but there were a few reported problems, including heated confrontations between poll workers and voters.

In Texas, a white poll worker was accused of bumping a black voter during an argument at a polling site and suggesting that the voter could better understand her if she’d worn “my blackface makeup.”

The Houston Chronicle reported the dispute began over a discrepancy with the voter’s address. The confrontation escalated, and witnesses confirmed to the newspaper that the worker said, “Maybe if I’d worn my blackface makeup today you could comprehend what I’m saying to you.”

The election judge at the site separated the two. The poll worker was cited for misdemeanor assault.

In Pennsylvania, a man was accused of threatening to shoot poll workers who told him he wasn’t registered to vote.

Ostrander said the man “told the poll workers he was going to go get a gun and come back and shoot them.” He was charged with terroristic threats and disorderly conduct. Court documents don’t list an attorney for him.
___

Severe weather and humidity were to blame for voting issues in a handful of states.

In New York City, a co-chairman of the state election board, Douglas Kellner, said scanners were breaking down at a higher-than-usual rate because it was using a two-page ballot and the weather was damp.

Kellner noted that if scanners were not working or lines for working scanners were too long, the ballots would be put aside in an emergency ballot box and scanned later or counted by hand.

In Tennessee, severe storms that knocked down trees and power lines forced voters in some places to use paper ballots instead of electronic voting machines. Tennessee Coordinator of Elections Mark Goins said the polling places that had electricity knocked out were operating on generators and had emergency ballots ready. He said the paper ballots would be counted Tuesday.
___

Election watchers say some voters are reporting being directed to wrong polling places by third-party election help websites such as TurboVote.

Sophia Hall, an attorney who was working at an election protection command center in Boston on Tuesday, says they received several such reports in Massachusetts and are aware of reports in other states.

Hall says they’ve also received reports of people being told they aren’t registered when they arrive at the polls even though they thought their registration had been confirmed by a third-party site.

TurboVote is a tool created by Democracy Works that helps people register and sends voters email and text reminders about registration deadlines, upcoming elections and where to vote. TurboVote doesn’t actually register voters but facilitates registration with state election offices.

Brandon Naylor, a spokesman for Democracy Works, says TurboVote gets its polling location information directly from the states, but sometimes the locations change at the last minute. He also says people sometimes mistakenly believe they are registered but didn’t complete all the steps to complete their registration with the state.
___

A polling station in Arizona failed to open on Tuesday for an unusual reason: The building it was in was foreclosed on overnight.

County Recorder Adrian Fontes said poll workers were trying to set up in the parking lot of the Golf Academy of America, which had been foreclosed on overnight Tuesday.

The owners of the Chandler property locked the doors, taking election officials by surprise. Fontes had said reopening the site would have required a court order.

The polling station was relocated and reopened four hours late.
___

Forty-one states were using computerized voting machines that are more than a decade old. Forty-three states were using machines that are no longer manufactured, making them more difficult to service when they break down, according to New York University’s Brennan Center for Justice. Yet Congress has repeatedly balked at appropriating the more than $1 billion needed to upgrade to more reliable systems.

By Tuesday afternoon, the nonpartisan Election Protection hotline had received about 17,500 calls from voters experiencing problems at their polling places. Kristen Clarke, president of the Lawyers’ Committee for Civil Rights Under Law, which helps run the hotline, said that was on par with the number of calls received during a presidential election and noted the hotline had received about 10,400 calls by the same time in 2014.

“Unfortunately, in this cycle we have seen sign evidence that we have important work to do to ensure that jurisdictions across the country are using the best voting equipment that is available and machines that don’t malfunction,” Clarke said. “We should not tolerate this kind of outcome in 2018.”
___

Media outlets were barred from taking photos or video Tuesday at a polling place in Kansas that has been at the center of controversy for weeks, and an embattled Republican congressman banned Iowa’s largest newspaper from covering his election night events.

In the only polling place in Dodge City, Kansas, which is outside city limits and more than a mile (1.6 kilometers) from the nearest bus stop, reporters were allowed into the Expo Center polling place with notebooks only, the Topeka Capital-Journal reported. Ford County Clerk Debbie Cox said letting the media take pictures and video would be too disruptive.

Max Kautsch, an attorney for the Capital-Journal and the Kansas Press Association, said that law needs to be balanced with rights under the First Amendment. He noted Ford County has allowed photographs in previous elections.

The Register reported it requested credentials to cover the event but King’s son, Jeff King, responded Tuesday with an email saying, “We are not granting credentials to the Des Moines Register or any other leftist propaganda media outlet with no concern for reporting the truth.”

King has faced criticism from Republican officials and lost funding from business group after he tweeted support for a white nationalist candidate in Toronto and praised a nationalist party in Austria with Nazi ties. King said media reports have been inaccurate and unfair.
___

A sign discouraging college students from voting was spotted at polling place in Rexburg, Idaho, on Tuesday morning.

Kristine Anderson, of Rexburg, spotted the sign, which told students they “should not be registering and voting in your college locale simply because you failed to register and vote at your true domicile.”

Anderson reported the sign to American Civil Liberties Union-Idaho, which tweeted: “We’ve spoken with the Madison County Clerk and they’re headed to the precinct to investigate these signs.” Anderson said the area is home to a large contingent of college students at Brigham Young University-Idaho.

College students have dual residency and a choice of where they want to vote. They can register back at home or on campus but not in both places.