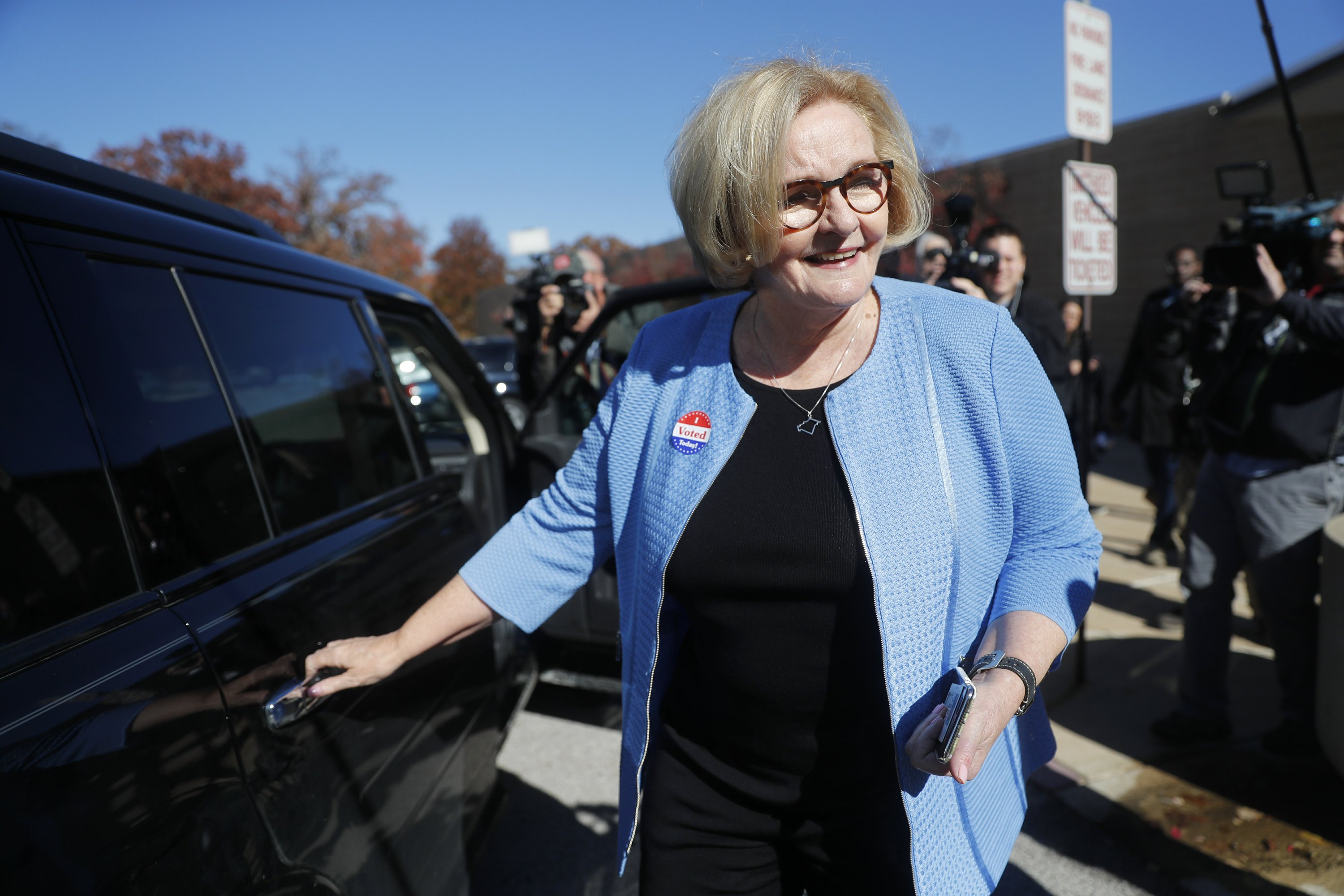 Democrats’ longshot prospects for capturing a Senate majority were pinned on hopes of their supporters surging to the polls. Party stalwarts and some independents have been roused by revulsion toward Trump’s anti-immigration rhetoric and policies, and his efforts to dismantle health care protections enacted under President Barack Obama, and by the #MeToo movement’s fury over sexual harassment.

The Democrats also had history on their side: 2002 was the only midterm election in the past three decades when the party holding the White House gained Senate seats.

Yet while Republicans command the Senate only narrowly, 51-49, Democrats faced daunting political math: They and their two independent allies were defending 26 of the 35 seats in play.

“We’ve had a very tough political map right from the start,” said Maryland Sen. Chris Van Hollen, who heads Senate Democrats’ campaign organization. “So we see it as a sign of great strength that we’re talking about a path, even a narrow path, to a Senate Democratic majority.”

Around a dozen races from New Jersey to Nevada were seen as coin flips or at least competitive, prompting each side to spend hundreds of millions of dollars. It was widely expected that if the GOP padded its current two-seat majority, it would do so only modestly.

With Democrats considered a good bet to grab House control from Republicans, keeping the Senate was seen as crucial for the GOP’s goals of tax and spending cuts, trade, immigration restrictions, curbs on Obama’s health care law and judicial nominations. With so much at stake, Trump campaigned in over a dozen states with Senate elections since Labor Day, visiting some multiple times.

Democrats needed to gain two Senate seats to win a majority, assuming all their incumbents were re-elected, an unlikely outcome. But going into Election Day, their target list was limited: They had a plausible chance of winning GOP-held seats only in Arizona, Nevada, Tennessee and Texas.

The 26 seats Democrats were protecting included 10 in states that Trump won in the 2016 presidential race, five of those by an enormous 19 percentage points or more.

In those 10 Trump-won states, Democratic Sen. Heidi Heitkamp of North Dakota seemed at greatest peril of losing. Other Democrats fighting for political survival included Missouri’s Claire McCaskill, Indiana’s Joe Donnelly and Bill Nelson of Florida. Nelson, 76, faced outgoing GOP Gov. Rick Scott, who poured over $50 million of his own fortune into his campaign, the most in the U.S.

In a sign that Trump dominance two years ago isn’t necessarily fatal for Democrats, their incumbents were expected to win re-election in six other states that he carried. Montana Sen. Jon Tester faced the toughest battle of that group, while moderate Joe Manchin, a former governor and brand name in West Virginia, was increasingly seen as safe in a state Trump took by 42 percentage points.

Trump’s racially tinged anti-immigrant appeals could hurt Republican candidates in swing states like Arizona and Nevada where college-educated voters could be decisive, but his rhetoric could help in deeply conservative areas.

Amid the recent rash of letter bombs and the Pittsburgh synagogue massacre, Trump issued alarming and often unfounded warnings about caravans of migrants crossing Mexico toward the U.S., blaming Democrats, without evidence, for the threat he claimed they pose.

CEO Steven Law of the Senate Leadership Fund, a campaign organization aligned with Senate Majority Leader Mitch McConnell, R-Ky., cited Republican voters’ concerns about “an open borders philosophy on the left, and a desire for greater immigration security.” Law said the caravans “made this immigration rhetoric visually real to people.”

In battlegrounds where Democrats were thought to have chances to gain seats, first-term Democratic Rep. Jacky Rosen was in a close contest with Nevada Sen. Dean Heller, the only Republican seeking re-election in a state Democrat Hillary Clinton won in the 2016 presidential race. Democratic Rep. Beto O’Rourke, a darling of progressives from coast to coast, raised record contributions but faced long odds of ousting tea party Sen. Ted Cruz in Texas.

Democrats also had opportunities because of the retirements of GOP Sens. Jeff Flake of Arizona and Tennessee’s Bob Corker, both essentially pushed out of Congress after accusing Trump of dishonesty and questioning his competence.

Republicans had another pickup opportunity in New Jersey, where Democratic Sen. Bob Menendez, who saw federal prosecutors drop bribery charges against him in January after a mistrial, faced wealthy pharmaceutical executive Bob Hugin.

At least one Senate race may not be decided Tuesday.

There was a strong chance Mississippi’s special election to complete the unexpired term of retired GOP Sen. Thad Cochran would go to a late November runoff. Republicans who dominate the state would probably prevail, but waiting for the outcome could extend the uncertainty about the Senate’s party breakdown — and perhaps which side has control.