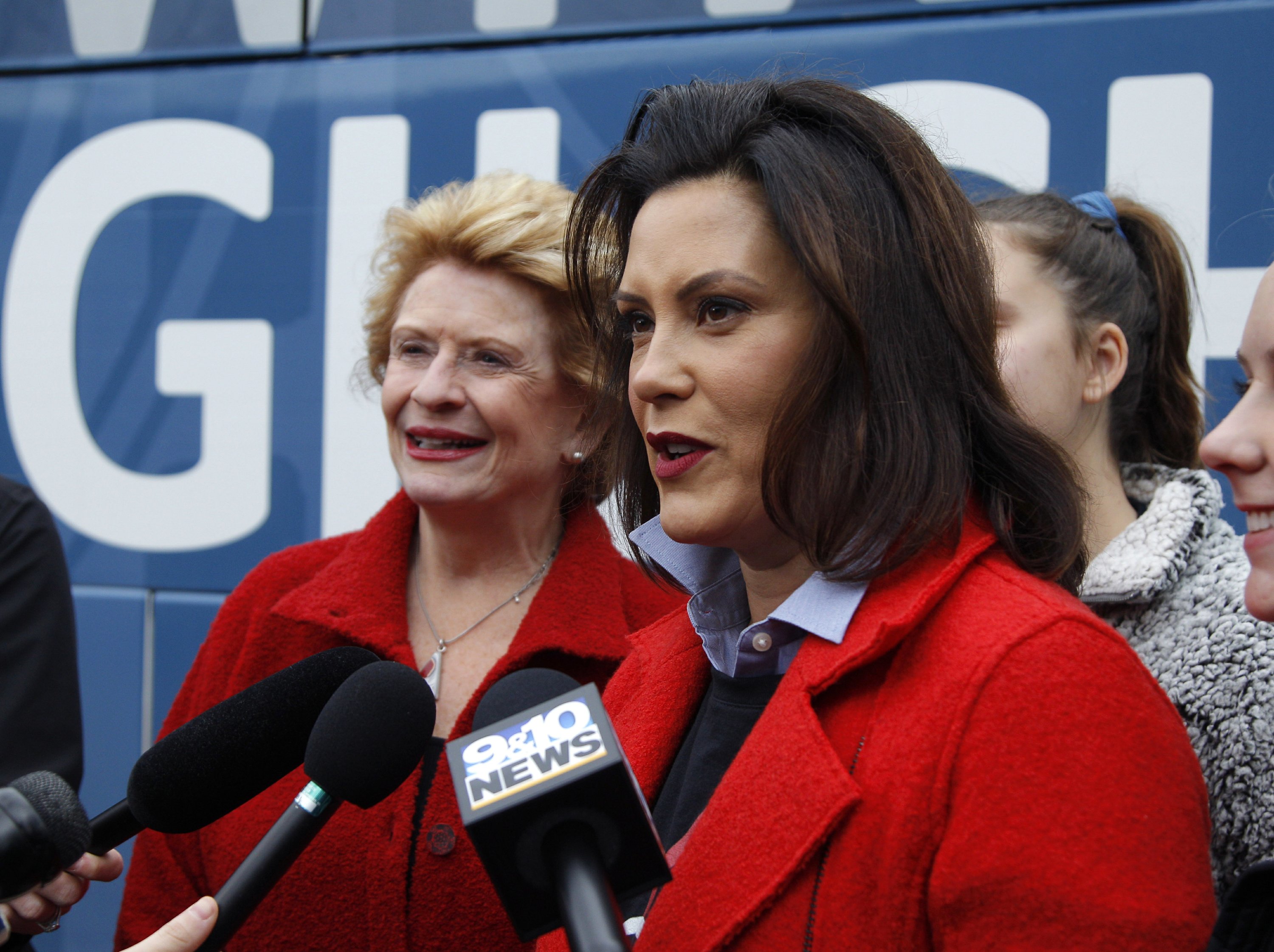 WASHINGTON — The Latest on Tuesday’s elections for governor and other state offices (all times local):

Democrat Gretchen Whitmer has won the Michigan governor’s race to break a Republican power bloc that had been a top target for Democrats.

Republicans had controlled the governor’s office and both chambers of the Michigan Legislature since racking up big victories in the 2010 midterm elections during Democratic President Barack Obama’s tenure. The GOP used that trifecta of power to enact congressional and state legislative maps that favored Republicans.

That made Michigan a top target for national Democrats.

Whitmer’s victory continues a trend of party changes in Michigan. Voters have not elected back-to-back governors of the same party since the 1960s.
___

Stitt will be paired with Republican majorities in the Oklahoma House and Senate in the traditionally conservative state.

He won election by casting himself as a businessman who is a political outsider in the mold of President Donald Trump.
___

Voters in Alabama and South Carolina have chosen to give full terms to a pair of Republican governors who rose to power because of political circumstances.

McMaster had been elevated from lieutenant governor in 2017 when Gov. Nikki Haley left office to become President Donald Trump’s ambassador to the United Nations.

Alabama Gov. Kay Ivey defeated Democrat Walt Maddox to win a four-year term. Ivey was elevated from lieutenant governor in 2017 when Gov. Robert Bentley resigned amid the fallout from allegations of a relationship with a top aide.

A Democrat will be back in charge of Illinois now that billionaire J.B. Pritzker has defeated Republican Gov. Bruce Rauner in one of the nation’s most expensive gubernatorial races ever.

Pritzker put more than $150 million of his own money into the race against Rauner, who also spent tens of millions of dollars of his own wealth.

Pritzker’s victory could restore a solid grip on government for Democrats, who already controlled both chambers of the state Legislature heading into Tuesday’s election. Rauner’s four-year term as governor had interrupted a Democratic trifecta that began in 2003.

If Democrats retain a trifecta after the 2020 elections, they would be in a position to control how boundaries are redrawn for Illinois congressional and state legislative districts after the 2020 Census.
___

Maryland Gov. Larry Hogan has won re-election in what amounts to a pretty historic feat.

Hogan defeated Democrat Ben Jealous on Tuesday to become the first Republican governor to win re-election since 1954 and only the second to do so in the state’s history.

Democrats outnumber Republicans by a 2-1 ratio in Maryland.

But Hogan’s victory ensures Republicans will have a say in the next round of congressional redistricting after the 2020 Census. That’s important for the GOP, because Democrats used their power in the Legislature and governor’s office to draw districts to their advantage after the 2010 Census.
___

Republicans have held on to governor’s offices in Texas and Wyoming.

Texas Gov. Greg Abbott won a second term by defeating Democrat Lupe Valdez in a race whose outcome was seldom in doubt.

Republicans also control the legislative chambers in Texas and Wyoming, though Democrats have been trying to chip away at the GOP advantage in Texas.
___

Bowser had been favored in the overwhelmingly Democratic District of Columbia. She defeated three challengers.

Bowser has presided over a period of relative prosperity and demographic shifts thanks to rapid gentrification. But her tenure has also been marked by a series of controversies inside the public school system over fraudulent graduation rates. Still Bowser won the Democratic primary in June with no serious opposition.

Democrats have retained the governor’s offices in New York and Pennsylvania.

New York Gov. Andrew Cuomo (KWOH’-moh) defeated Republican Marc Molinaro on Tuesday to win election to a third, four-year term. No Republican has won a gubernatorial race there since 2002.

Wolf’s victory will ensure Democrats have a role in the next round of congressional redistricting after the 2020 Census.

Redistricting has been a hot topic in Pennsylvania, where the state Supreme Court earlier this year threw out the congressional maps drawn by the Republican-led state Legislature after the 2010 Census. The high court ruled the boundaries were an unconstitutional partisan gerrymander and ordered new districts for this year’s elections.
___

Lee’s election Tuesday to a four-year term means Republicans are in a good position to retain their trifecta of power through the next round of congressional and state legislative redistricting after the 2020 census.

Lee will succeed Republican Gov. Bill Haslam, who was barred by term limits from seeking re-election.
___

The incumbent governors of Arkansas and Rhode Island have won re-election.

In Rhode Island, Democrat Gov. Gina Raimondo defeated Republican challenger Allan Fung to win a second, four-year term. She will work alongside plenty of fellow Democrats, who hold commanding majorities in both chambers of the state Legislature.
___

Republican Charlie Baker has won another term as governor in the traditionally Democratic stronghold of Massachusetts.

Baker defeated Democrat Jay Gonzalez on Tuesday following a campaign in which he touted a strong economy and his role in stabilizing a state budget without broad tax increases. Baker is a moderate Republican who has frequently criticized President Donald Trump.

Democrats nationwide are trying to chip away at Republican control in many state capitols. The GOP entered Tuesday’s elections holding 33 governor’s offices and two-thirds of the state legislative chambers.

The Massachusetts Legislature is dominated by Democrats. But Baker’s election to a second, four-year term means Republicans will have a say when congressional and state legislative districts are redrawn after the 2020 Census.
___

Democrats are trying to chip away at Republican control in state Capitols during elections for governor and state legislature.

In both Deep South states, black candidates would break barriers if they win but face Republicans who are drawing energy from their close alignment with President Donald Trump.

Republicans currently control two-thirds of all legislative chambers and the governor’s office in 33 states. That includes 25 states where they hold a trifecta of power, compared with just eight for Democrats.

National Republican and Democratic groups have poured record amounts of money into this year’s state elections.
___

For AP’s complete coverage of the U.S. midterm elections: http://apne.ws/APPolitics