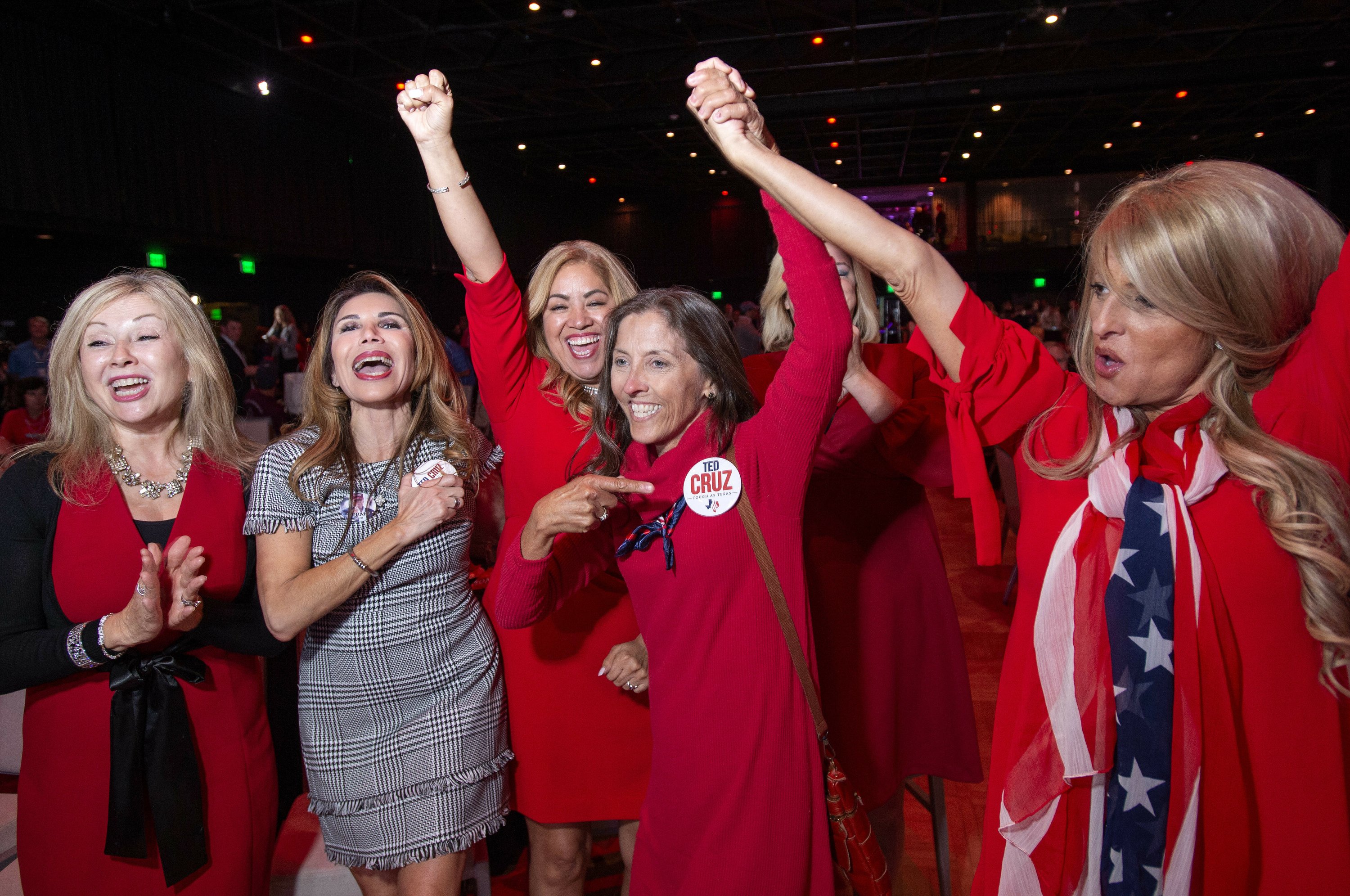 WASHINGTON — The Latest on Election Day (all times local):

Democrats have won half the seats they need to reclaim the House majority, while Republicans were picking up key Senate contests.

Democrats picked up at least 12 Republican-held House seats in early returns but fell short in a closely watched race in Kentucky as they fought to wrest control of the chamber after eight years of GOP rule.

Democrats needed a net gain of 23 seats to control the House and gain a check on President Donald Trump.

Democratic gains included several suburban districts eyed for turnover because they were won by Hillary Clinton, including seats outside Washington, Philadelphia, Miami and Denver.

Republicans have retained Senate control for two more years, shattering Democrats’ dreams of an anti-Trump wave sweeping them into the majority.

The GOP’s gains come even as the results in Nevada and Arizona have yet to be determined.

Election day began in the U.S. on Tuesday morning. Control of the U.S. Senate, U.S. House of Representatives and numerous governorships and state and local offices are all at stake. (Nov. 6)

Democrats are gaining ground in their fight for control of the House, picking up key seats in Florida, Pennsylvania and Minnesota.

The early wins give Democrats a share of the seats they’ll need for House control. They won two seats in Florida, knocking off two incumbents there, and have won three seats in Pennsylvania, where court-ordered redistricting made the terrain more favorable to Democrats. They have also defeated a Republican incumbent in Minnesota.

Sanders spoke to reporters at the White House Tuesday night, as election returns were still coming in. She says, “Maybe you get a ripple but I certainly don’t think that there’s a blue wave.”

She says there is still a “long way to go,” but the White House feels “good about where we are right now.”

Should Republicans lose the House, Sanders says the president’s agenda is not going to change.

Speaking on Fox News, Sanders said the candidates that Trump campaigned for are doing well. She also said that if Republicans should lose the House, Democrats should try to work across the aisle.
__

Polls have closed across the East Coast, but the results in some of the most closely watched races remain too close to call.

Polls across six states closed at 7 p.m. EST, including battlegrounds Georgia, Indiana and Kentucky. Polls in other key states including Florida, Pennsylvania and New Jersey closed at 8 p.m. EST.

At least two lower-profile elections with presidential implications were decided after the first major wave of polls closed in the East.

Health care and immigration were high on voters’ minds as they cast ballots in the midterm elections, per a wide-ranging survey by The Associated Press.
___

As polls begin to close, the White House is stressing the effort President Donald Trump put into a political ground game aimed at putting Republicans in the win column for Tuesday’s midterm elections.

White House press secretary Sarah Huckabee Sanders says in a written statement that Trump has headlined 50 political rallies, 30 in the past two months. He’s campaigned for dozens of candidates at all levels of government.

Sanders says the Republican National Committee raised more than $250 million under Trump to defy what she calls “midterm history,” which tends to favor the party that does not control the White House.

Trump packed his closing argument with hardline immigration rhetoric and harsh attacks on Democrats as he stared down the prospect of Republican losses that could shadow his presidency.

Faced with the possibility of keeping the Senate but losing the House, aides have begun laying out the political reality to Trump, who could face an onslaught of Democratic-run investigations and paralysis of his policy agenda.

Trump has already been trying out defensive arguments, noting that midterm losses are typical for the party in the White House, pointing out a high number of GOP retirements and stressing that he has kept his focus on the Senate.
__

Long lines and malfunctioning machines marred the first hours of voting in some precincts across the U.S.

Some of the biggest problems Tuesday were in Georgia, a state with a hotly contested gubernatorial election. Voters reported waiting up to three hours to vote.

At a polling place in Snellville, Georgia, more than 100 people took turns sitting in children’s chairs and on the floor as they waited in line for hours.

Voter Ontaria Woods said about two dozen people who had come to vote left because of the lines.

At a poll site in Atlanta, voters waited in the rain in long lines that stretched around the building.

Hannah Ackermann said officials at the polling site offered various explanations for the delay, including blaming workers who didn’t show up and overloaded machines.
___

The California Democrat says at a Tuesday morning press conference that the election is “about health care.”

Pelosi credits Democratic politicians and activists across the country with helping to fend off attempts to repeal the Affordable Care Act following 2016 election results that left Republicans in control of Congress and the White House.

Pelosi says that after 2016 Democrats “didn’t agonize, we organized.”

She forecasts Democratic victories across the country, but with a small overall margin of victory. Pelosi says that as few as 25,000 votes nationwide could swing the results.

Pelosi has remained noncommittal amid speculation that she would step aside to make way for new leadership, regardless of the election results.
___

Russia’s Foreign Minister Sergey Lavrov says he hopes the outcome of the U.S. midterm election will ease domestic tensions in the United States and enable Washington to focus on global issues.

Speaking to reporters in Madrid on Tuesday, Lavrov lamented that Russian-American ties have become “hostage to internal political squabbles in America.”

Lavrov said he is hopeful that the election will help stabilize domestic politics in the U.S. “so that Washington could concentrate on some positive steps on the international arena.”

Lavrov also reiterated Moscow’s position that it is not meddling in U.S. elections.

He said, “All the accusations that we will be meddling in today’s elections turned out to be empty statements.”
____

A line of storms moved through the Deep South overnight and early Tuesday morning, knocking down trees and power lines from Louisiana to South Carolina. There were no serious injuries but an estimated 11,000 residents were left without electricity.

A separate storm front in central Tennessee overnight killed one person, injured two others and also left thousands without power.

The National Weather Service warned of a possibility of high winds, severe thunderstorms and possible tornadoes Tuesday around Baltimore, Washington, D.C., and the Mid-Atlantic region.

Dry weather was forecast for the West and Southwest, but significant snow accumulations were expected across the northern Rockies.
__

A turbulent election season that has tested President Donald Trump’s slash-and-burn political style against the strength of the Democratic resistance comes to a close as Americans cast ballots in the first national election of the Trump era.

As voters head to the polls Tuesday, nothing was certain.

Anxious Republicans have privately expressed confidence in their narrow Senate majority but fear the House is slipping away.

Democrats’ very relevance in the Trump era depends on winning at least one chamber of Congress. They remain laser-focused on health care as they predict a nationwide “awakening” that will break up the GOP’s monopoly in Washington and state governments.