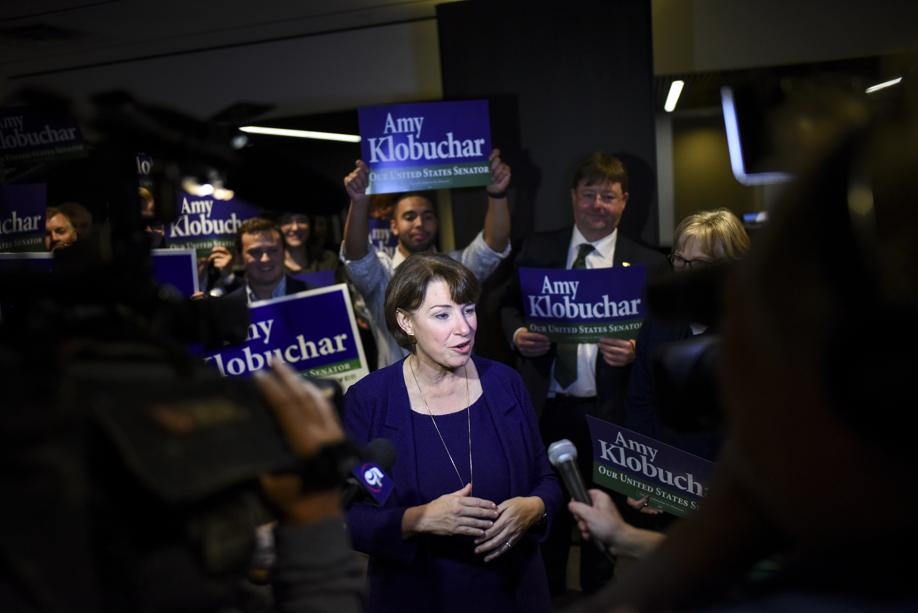 WASHINGTON — The Latest on U.S. Senate elections (all times local):

Democratic Sen. Joe Manchin of West Virginia has turned back a challenge by Republican Patrick Morrisey to win his second full-term in a state carried by President Donald Trump.

Manchin survived the most difficult re-election campaign of his career against the comparative newcomer Morrisey. Manchin is a former governor who has held elected office in West Virginia for the better part of three decades.

Manchin heavily outspent Morrisey and portrayed himself as loyal to his home state rather than party ideology. Manchin was the only Senate Democrat to vote to confirm Supreme Court nominee Brett Kavanaugh.

Manchin was critical of Morrisey’s New Jersey roots and his past lobbying ties to the pharmaceutical industry.

Morrisey is a two-term state attorney general and a staunch Trump supporter.
___

Democratic Sen. Tammy Baldwin of Wisconsin has won a second term, fending off a challenge from a Republican who ran as a staunch supporter of President Donald Trump.

Baldwin led Leah Vukmir in fundraising and polls throughout the race.

Baldwin is one of the most liberal members of Congress. The differences between her and Vukmir were stark. They disagreed on almost every issue.

Baldwin made the campaign largely about health care and Vukmir’s opposition to the Affordable Care Act. Baldwin argued for keeping the law and its guarantee of insurance coverage for people with pre-existing conditions.

The race was Wisconsin’s first for Senate where both major party candidates were women.
___

The race was never close. Newberger is a little-known state lawmaker who struggled to raise money against the popular Klobuchar.

The GOP has dreamed of this victory since Donnelly unexpectedly beat Republican nominee Richard Mourdock in 2012, after Mourdock made incendiary comments about abortion and rape.

However, few would have predicted Braun’s win when he entered the race last year. The multimillionaire auto-parts magnate was a little-known state representative when he launched his bid.

But Braun used his own wealth to out-fundraise two better known congressmen during a bitter GOP primary that was fueled on personal attacks.

Barletta was an early supporter of President Donald Trump, who returned the favor by campaigning for the former Hazleton mayor. The president narrowly won Pennsylvania in 2016, but Casey easily won re-election Tuesday in a state that has now given the son of the late former governor six statewide election victories.

Casey is a staunch critic of Trump’s tax cuts, calling them a giveaway to the wealthy and corporations while middle-class wages stagnate. Casey also voted against Trump’s nominees for Supreme Court.

Barletta is one of Trump’s biggest allies on Capitol Hill. He campaigned on Trump’s record, but he never gained traction and was heavily outspent by Casey.
______

Republican U.S. Sen. Roger Wicker has been re-elected in Mississippi and Republican John Barrasso has won a second full term in Wyoming.

Wicker defeated Democratic state Rep. David Baria and two others Tuesday, keeping the seat he has held since 2007.

After Republican Sen. Trent Lott resigned in late 2007, then-Gov. Haley Barbour appointed Wicker to temporarily fill the seat. Wicker won a special election in 2008 to complete Lott’s term, and was re-elected in 2012.

Barrasso defeated Gary Trauner in a race that was a referendum on President Donald Trump in the state. Barrasso argued that less federal regulation and federal income tax cuts enacted under Trump have helped Wyoming’s economy.
____

Gillibrand was heavily favored in Tuesday’s election and has been talked about as a potential presidential candidate in 2020.

At a recent debate, Gillibrand pledged to serve her entire six-year Senate term.

Gillibrand was appointed in 2009 to the Senate seat vacated when Hillary Clinton was nominated as secretary of state.

She rose to prominence in the #MeToo movement last year as the first Democratic senator to call publicly for fellow Democratic Sen. Al Franken to resign amid sexual misconduct allegations.

She has also focused on sexual assault in the military and on college campuses.

New Jersey Democratic Sen. Bob Menendez has fended off his wealthy Republican challenger to win re-election despite a barrage of ads about corruption charges he beat in court.

Hugin tapped his deep pockets for at least $27.5 million and spent on TV ads attacking Menendez over the 2017 trial on charges that he helped a friend with Medicare billing in exchange for lavish gifts.

Prosecutors decided not to retry the case after a mistrial.

The race was particularly significant because Democrats are defending 26 seats, including 10 incumbents running in states that President Donald Trump won in 2016.
_____

Democratic Sen. Sherrod Brown has been elected to a third term.

Brown is in his fifth decade of Ohio politics. He won his first election to the state’s House in 1974 and unseated Republican Sen. Mike DeWine in 2006. With a history of blue-collar appeal and union support, Brown has backed Trump moves on steel tariffs and renegotiating trade agreements.

Renacci is a businessman who called Brown a liberal out of touch with Ohio values.
___

Sen. Elizabeth Warren of Massachusetts, a potential 2020 White House contender, is among a group of five Democratic lawmakers who have easily won re-election to the Senate.

Sens. Chris Murphy of Connecticut, Ben Cardin of Maryland, Tom Carper of Delaware and Sheldon Whitehouse of Rhode Island also won. They were heavy favorites in their races.

Warren has generated considerable speculation about a possible run for the White House in 2020, recently saying she’d take a “hard look” at a presidential bid after the Senate race was over.

Murphy won a second term after amassing a fundraising war chest that was 100 times larger than his opponent’s.

Meanwhile, Carper won his fourth term. He has never lost an election during four decades in politics.

Virginia Democrat Tim Kaine has dispatched a die-hard supporter of President Donald Trump to win re-election to the U.S. Senate.

The victory was widely expected as Kaine enjoyed large leads in most public polls and had a huge cash advantage.

Kaine is a former governor who was first elected to the Senate in 2012. He was Hillary Clinton’s running mate in 2016.

Stewart is a conservative provocateur best known for his outspoken support of Confederate imagery and hard-line views on immigration. He struggled to raise money and was ignored by national GOP groups.
____

Vermont’s Bernie Sanders has cruised to re-election for his third term in the Senate, easily outpacing eight candidates.

Sanders, the independent who has long been one of the state’s most popular politicians, spent little time campaigning ahead of Tuesday’s election.

Sanders has faced few serious opponents since he was first elected to the state’s lone seat in the House in 1990. He moved up to the Senate in 2006.

The Republican candidate, Lawrence Zupan, a Manchester real estate broker with experience in international trade, campaigned against what he felt was big government and social welfare programs. But his candidacy never gained traction and his campaign drew little attention.

Rather than focusing on his re-election, Sanders traveled the country to support Democratic candidates and an array of policy issues.
____

The native Houstonian released a series of Instagram posts with a black and white “Beto” cap partially covering her face on Tuesday afternoon.

O’Rourke himself then retweeted one of the pictures under the caption “Thank you, Beyonce.”

An El Paso congressman, O’Rourke is trying to become the first Democrat to win statewide office in Texas since 1994. He’s drawn the admiration of many celebrities, including Texas country music icon Willie Nelson.

Republicans are aiming to retain Senate control in Tuesday’s voting.

Democrats’ longshot prospects for capturing a Senate majority are pinned on hopes of their supporters surging to the polls. Democrats and some independents have been motivated by Trump’s anti-immigration rhetoric and policies and his efforts to dismantle health care protections enacted under President Barack Obama.

The Democrats have history on their side: 2002 was the only midterm election in the past three decades when the party holding the White House gained Senate seats.

Republicans have a narrow 51-49 majority. Democrats need to gain two Senate seats to win a majority. But they and their two independent allies are defending 26 of the 35 seats in play. Those 26 seats include 10 in states that Trump won in 2016.