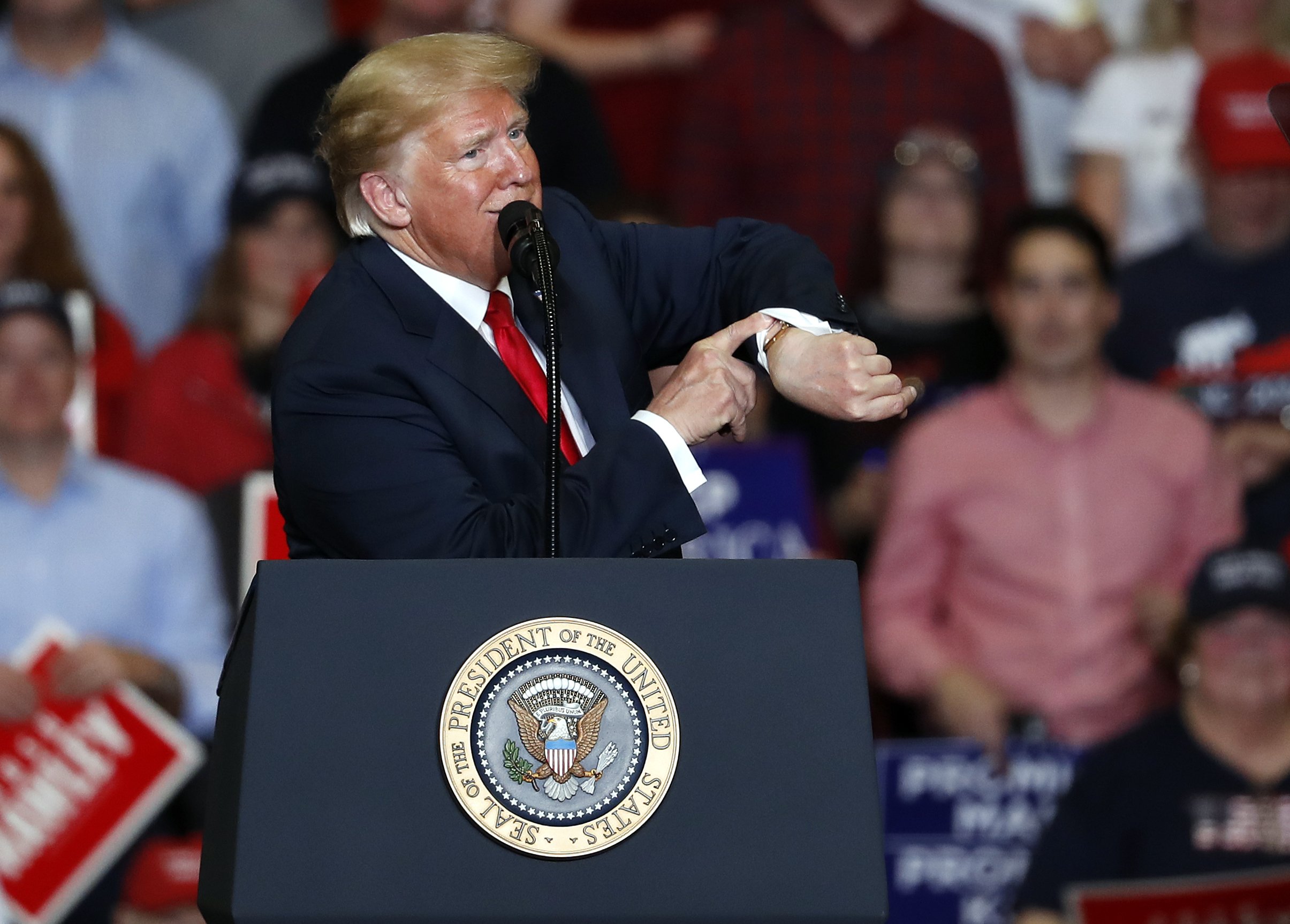 WASHINGTON — With the loss of the Republican majority in the House, President Donald Trump is facing the prospect of endless House investigations, stymied policy efforts and fresh questions about the resilience of his unorthodox political coalition.

Still, he celebrated GOP success hanging on to the Senate and distanced himself from any blame.

“Tremendous success tonight. Thank you to all!” Trump tweeted late Tuesday after staying quiet for much of election night. Early Wednesday, Trump added: “Now we can all get back to work and get things done!”

Trump was expected to further address the results at a White House news conference later Wednesday.

On Tuesday, Trump called House Democratic leader Nancy Pelosi, a conversation that her office said included congratulations and a nod to her pitch for bipartisanship.

That call did not stop him from getting his digs in at Pelosi in a Wednesday tweet: “Those that worked with me in this incredible Midterm Election, embracing certain policies and principles, did very well. Those that did not, say goodbye! Yesterday was such a very Big Win, and all under the pressure of a Nasty and Hostile Media!”

Widely viewed as a referendum on Trump’s presidency, Tuesday’s results offered a split decision that revealed deep tensions in the American electorate — distances that could easily widen during two years of divided control. Trump’s aggressive campaign blitz, which paid off in some key victories, suggests he is likely to continue leaning into the fray.

Control of the House gives Democrats the ability to launch investigations into the president and stifle his agenda. But White House spokeswoman Sarah Huckabee Sanders minimized the magnitude of Democratic gains.

“Maybe you get a ripple, but I certainly don’t think that there’s a blue wave,” she told reporters, pointing to several early Republican wins.

As for Republicans retaining control of the Senate, she called it “a huge moment and victory for the president.”

White House aides called on Democrats to work with Republicans in the next Congress.

Said White House counselor Kellyanne Conway, “I don’t know that there will be much of an appetite for Democrat lawmakers to spend all of their time, or most of their time or even a fraction of their time investigating, instigating, trying to impeach and subpoena people.”

In addition to his conversation with Pelosi, Trump called Republican Senate Majority Leader Mitch McConnell, Republican House Speaker Paul Ryan and Senate Minority Leader Chuck Schumer, as well as a number of candidates he backed during the race, the White House said.

The White House for days has been stressing the historical headwinds it faced: In the last three decades, 2002 was the only midterm election when the party holding the White House gained Senate seats. And only twice in the past eight decades has the president’s party picked up House seats in the midterms.

Trump spent election night watching returns with family and friends at the White House, his shadow looming large over the results.

Nearly 40 percent of voters cast their ballots to express opposition to the president, according to AP VoteCast, a national survey of the electorate, while about 25 percent said they voted to express support for Trump.

Anticipating the possibility of keeping the Senate but losing the House, aides in recent days had laid out the political reality to Trump, who could face an onslaught of Democratic-run investigations. In turn, Trump began trying out defensive arguments ahead of Election Day, noting that midterm losses are typical for the party in the White House, pointing out a high number of GOP retirements and stressing that he had kept his focus on the Senate.

Aides set up televisions in the White House residence for Trump, first lady Melania Trump and their guests to watch election results come in, with the sets tuned to different cable news channels. Among those expected were Trump’s adult children, White House aides, Republican officials and presidential friends.

The election served as a referendum of sorts on Trump’s racially charged appeals and the strength of the coalition that powered him to the White House — a group he will need again in just two years.

Overall, more voters disapproved of Trump’s job performance than approved — a finding that is largely consistent with recent polling. Voters scored Trump positively on the economy and for standing up “for what he believes in.” But the president received negative marks from voters on temperament and trustworthiness.

Still, about one-third of voters said Trump was not a factor in their votes.

Trump’s scorched-earth campaigning came to define the 2018 campaign. In the final days, he sought to motivate supporters with the battle over the confirmation of Supreme Court Justice Brett Kavanaugh.

Returning to his immigration-heavy 2016 playbook, Trump went on to unleash his full fury on a caravan of migrants slowly making their way to the southern border. His take-no-prisoners approach troubled many Republicans seeking to appeal to moderate voters in suburban House districts, but Trump prioritized base voters in the deep-red states that could determine the fate of the Senate.