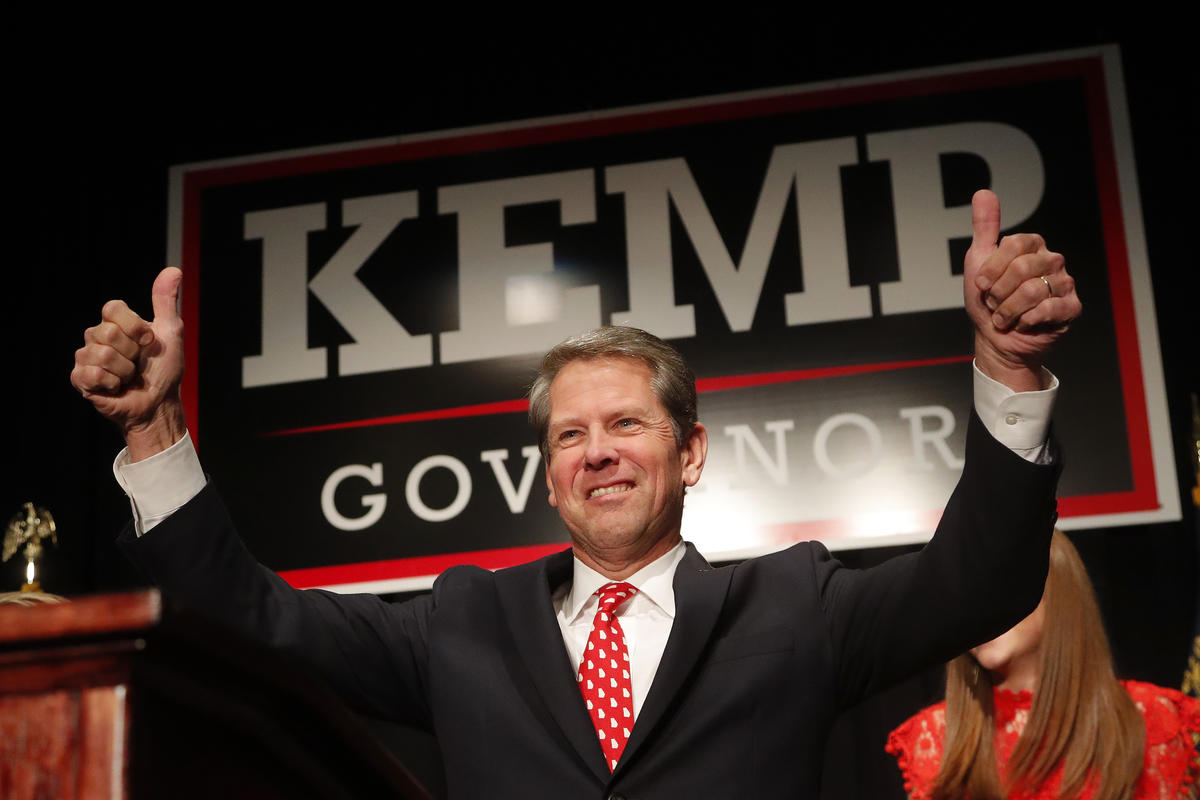 ATLANTA — Republican Brian Kemp resigned Thursday as Georgia’s secretary of state, a day after his campaign said he’s captured enough votes to become governor despite his rival’s refusal to concede.

As the state’s top election official, Kemp oversaw the race, a marquee contest in the nation’s midterms. His resignation Thursday morning came as a hearing began for a lawsuit in which five voters asked that he be barred from exercising his duties in any future management of his own election tally. Democratic rival Stacey Abrams’ campaign had repeatedly accused Kemp of improperly using his post as secretary of state.

Kemp’s resignation takes effect just before noon Thursday. Kemp said an interim secretary of state has been appointed to oversee the rest of the vote count.

Abrams has pointed to ballots that have yet to be counted and says there’s still the possibility of a December runoff. Her campaign has said she must pick up about 15,000 votes to do so.

Kemp said Abrams is using “old math.” Without providing specifics, he said in a WSB Radio interview that the number “is actually more like 30,000 votes.”

The Associated Press has not called the election.

At a news conference with Republican Gov. Nathan Deal late Thursday morning, Kemp declared that there are only about 20,000 provisional ballots that have not yet been counted in the race. He did not offer any details, but in response to a question said he would ask about releasing county-by-county results.

In fact, Kemp’s office did release to the AP a county-level breakdown about the same time he started speaking in Deal’s office Thursday. The office had not immediately shared that requested information the day before, however, even as Kemp’s campaign cited the statewide estimate as his justification for declaring victory.

The standoff continued to attract attention around the country, with the head of the Democratic National Committee applauding Abrams for pressing on and blasting Kemp as untrustworthy.

“It is grossly unfair to any fox in America to compare Brian Kemp with a fox guarding the hen house. It is much worse in Georgia,” DNC Chairman Tom Perez said in Washington. “I don’t think that race is over. Every vote must be counted, and the integrity of that election is at stake.”

Late Wednesday afternoon — after a day of the campaigns, news outlets and partisan observers scrambling for information about outstanding votes across Georgia’s 159 counties — Kemp aide Ryan Mahoney told reporters on a conference call, “We are declaring victory.” Campaign official Austin Chambers added: “The message here is pretty simple: This election is over, and the results are clear.”

“He’s offered … no indication of why we should take him at his word,” Groh-Wargo said. “The sitting secretary of state has declared himself” the winner.

The standoff leaves open the possibility of litigation as Abrams’ campaign has pushed for the continued counting of absentee, mail-in and provisional ballots, and renewed its concerns that Kemp was the chief elections officer supervising his own election, a race already marked by disputes over the voting process.

If a runoff is necessary, it will take place Dec. 4, extending Abrams’ bid to become the first black woman elected governor in American history, while Kemp looks to maintain the GOP’s domination in a state where Democrats haven’t won a governor’s race since 1998.

Partisan observers nationally have watched intently for clues about just how much of a battleground Georgia can be in the 2020 presidential campaign.

Before the Kemp campaign declared victory Wednesday, Groh-Wargo estimated that about 15,000 votes separate Kemp from a runoff. She says at least that many outstanding absentee and mail-in ballots remained to be counted.

Kemp’s spokeswoman in the secretary of state’s office, Candice Broce, said that by Wednesday afternoon the number of uncounted absentee and mail-in ballots was less than 2,000 — with her boss still above the 50 percent threshold.

Broce said about 22,000 provisional ballots have yet to be processed, according to a canvass of county officials across the state. Mahoney asserted that those numbers make it impossible for Abrams to pick up enough votes to deny Kemp an outright victory.

In 2016, with a slightly larger electorate, there were 16,739 provisional ballots. Of those, 7,592 were counted. State and campaign officials said they expected a much higher proportion to be counted this year.

Abrams’ campaign officials said they believed the uncounted provisional ballots were in metro Atlanta counties where Abrams won a large share of the vote. Broce said the secretary of state’s office is working on releasing more detailed information.

The lawsuit at issue Thursday morning in an Atlanta federal court came from voters who sued Kemp on Election Day alleging that Kemp presiding over an election in which he is a candidate “violates a basic notion of fairness.” The plaintiffs asked the court to block Kemp from having anything more to do with managing his election. The hearing ended shortly after it began with the announcement of Kemp’s resignation.

It’s not immediately clear what Kemp’s practical role was in the election tally. Local officials are responsible for counting the votes, including provisional ballots. County officials have until next Tuesday to certify their results and send them to Kemp’s office. Statewide certification must come by Nov. 20.