In Honduras, most returnees from caravan hope to try again 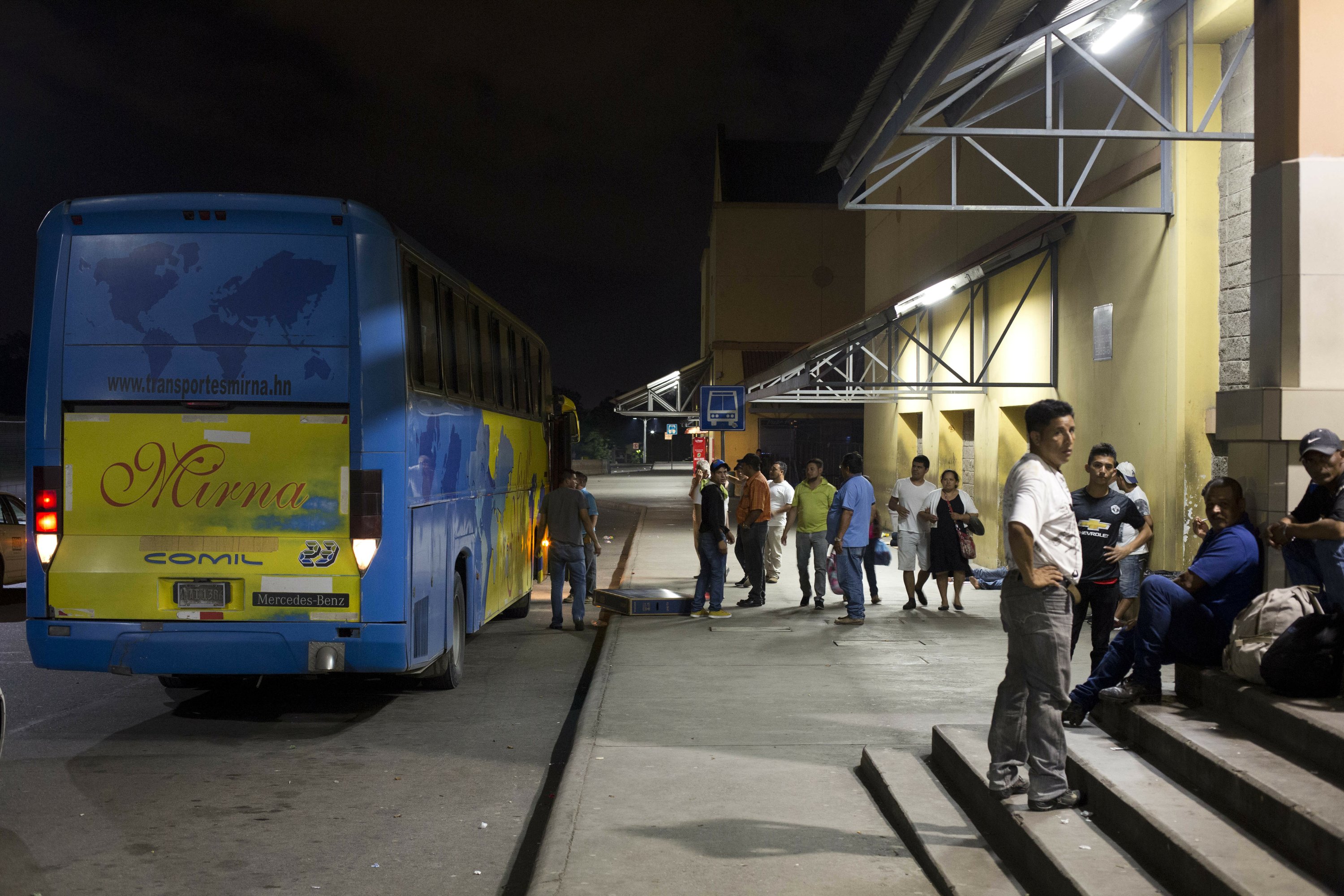 SAN PEDRO SULA, Honduras — The Metropolitan Grand Central bus terminal in this city where the migrant caravan traveling through Mexico originated more than three weeks ago is a place of crossing destinies for Hondurans dreaming of seeking a better life in the United States.

Some of the dozens of people sleeping on the concrete floor or outside on the grass underneath palm trees bathed by the light of street lamps are awaiting buses to the Guatemalan border to begin the journey north. Others are arriving after failing to complete the trip and are being ferried back to the precarious lives they left behind.

Hundreds of the mostly Honduran migrants who set out with the caravan that has traversed hundreds of miles through three countries before arriving in Mexico City this week have returned home, according to the Mexican government. Some grew disillusioned. Others simply wore out. Still others were detained and returned, or gave up on waiting for possible asylum in Mexico and accepted bus rides back home.

Disembarking at the bus station in San Pedro Sula, nearly all of those returning said the same thing: Maybe not today, maybe not tomorrow, but they intend to try again.

“I would go 30 times more if possible,” said Daniel Castaneda, an 18-year-old from the central city of Comayagua. He was detained shortly after migrants in a caravan following in the footsteps of the first one clashed with police on a bridge on the Mexican border with Guatemala late last month.

“I can’t say when, but I am going to keep going. … This country is going to be left empty,” he said.

Reny Maudiel a fresh-faced 16-year-old in a green T-shirt, a mop of curly hair sticking skyward from his head, said he was turned off by the violence of last month’s border clashes. He was also exhausted, and his feet hurt — but already his mind was turning northward.

“I hope another opportunity emerges,” he said.

While U.S. President Donald Trump seized on the caravan as a campaign issue for Tuesday’s midterm elections and suggested that criminals had infiltrated the group, the migrants say they are fleeing poverty, lack of jobs and rampant violence.

In a country that is one of the world’s deadliest by homicide rates, San Pedro Sula is among the most violent cities as the Mara Salvatrucha, or MS-13 street gang, fights street-by-street with the rival 18th Street gang for territory. It’s also seen a harsh crackdown by security forces including documented abuses. Nationwide nearly two-thirds of Hondurans, or some 5.5 million people, live in poverty, according to the World Bank.

Pablo Alba choked up thinking about how his 11-year-old son wrapped his arms around his neck and begged to be taken on the journey north. Alba said no, not wanting the boy to risk the arduous trek.

“If there must be suffering, I will go alone,” he said, recalling that Oct. 13 day when he set off to join the caravan with only the clothes on his back.

The 64-year-old had never thought about emigrating before because he had always been able to find work. A trained veterinarian, he ended up selling tamales cooked by his landlady, and it wasn’t nearly enough to support his family.

Mexican authorities say some 3,230 migrants from the caravan have requested refuge. Alba used to be one of them. But shut in at an immigration center and unable to communicate with his children — he had no money or cell phone — he dropped his application and agreed to return to Honduras. Some 480 others have done the same, according to the Mexican government.

He intends to try again in March — only this time he will bring his kids.

According to data from Mexico’s National Immigration Institute, on average 136 Honduran migrants per day have been returned to their country this year. Women and children are taken directly to a shelter in San Pedro Sula. Men go by bus to the Caribbean coastal city of Omoa, and from there are transferred to the San Pedro terminal.

Some days they’re met at the bus station by government officials sitting behind a plastic table offering “solidarity bags” of basic goods such as rice and dried spaghetti, along with a photo of President Juan Orlando Hernandez and a note saying it comes from his government.

Jorge Marquez said they were taking returnees’ information to “follow up with them” and allow them to benefit from aid that Hernandez has promised in response to the caravan, which at its peak numbered more than 7,000 people.

But such vows largely ring hollow in this deeply troubled and politically unstable country. In interviews with The Associated Press, most returnees said they faced only a bleak future if they remained in Honduras.

However, some, like Gerardo Castillo, a 35-year-old mason, did find encouragement in promises by Mexico’s President-elect Andres Manuel Lopez Obrador, who takes office Dec. 1, to give special visas to Central Americans to work in his country.

Castillo, who left two children back home in Olancho and has two more in the United States, complained that immigration agents under the current Mexican administration were detaining migrants who separated from the main caravan, as happened to him. In Lopez Obrador, he sees a possible future in Mexico.

“On Dec. 1, I will be in Tecun Uman,” Castillo said, referring to the Guatemalan city across the river border from Mexico.

Olvin Fernando Murillo, 20, made it almost 200 miles (300 kilometers) north of that crossing to the town of Arriaga — still far from Phoenix, Arizona, where a brother lives.

That’s when his 16-year-old girlfriend got sick. When it became clear she wasn’t getting better they decided to return to their Honduran hometown of El Paraiso on the border with Nicaragua.

He sold his cellphone to raise a bit of money and had little more than a donated green backpack he picked up after crossing into Mexico.

But his plans were clear. “To rest for a while, and in January, another caravan,” he said.

Rumors that yet more caravans will form are flying in every corner of Honduras. They’re attractive for the perception that they provide safety in numbers, and because they’re a way to avoid paying thousands of dollars to a smuggler.

But the reality is far less certain.

Those few who make it to the United States face a tough road to be able to stay legally; poverty and violence are not supposed to be considered as qualifying factors for asylum. Trump has talked of making asylum even more difficult, of detaining applicants in tent cities and of sending 15,000 U.S. troops to the southern border.

Still, 27-year-old Claudia Noriega was determined to risk it, saying she can no longer make a living selling sweets since sugar prices have soared. She was aware she could end up back here in a few weeks’ time, just like the men sleeping on the bus terminal floor.

“The important thing is to try,” she said. “And if you can’t, you’ll have to see what to do then.”