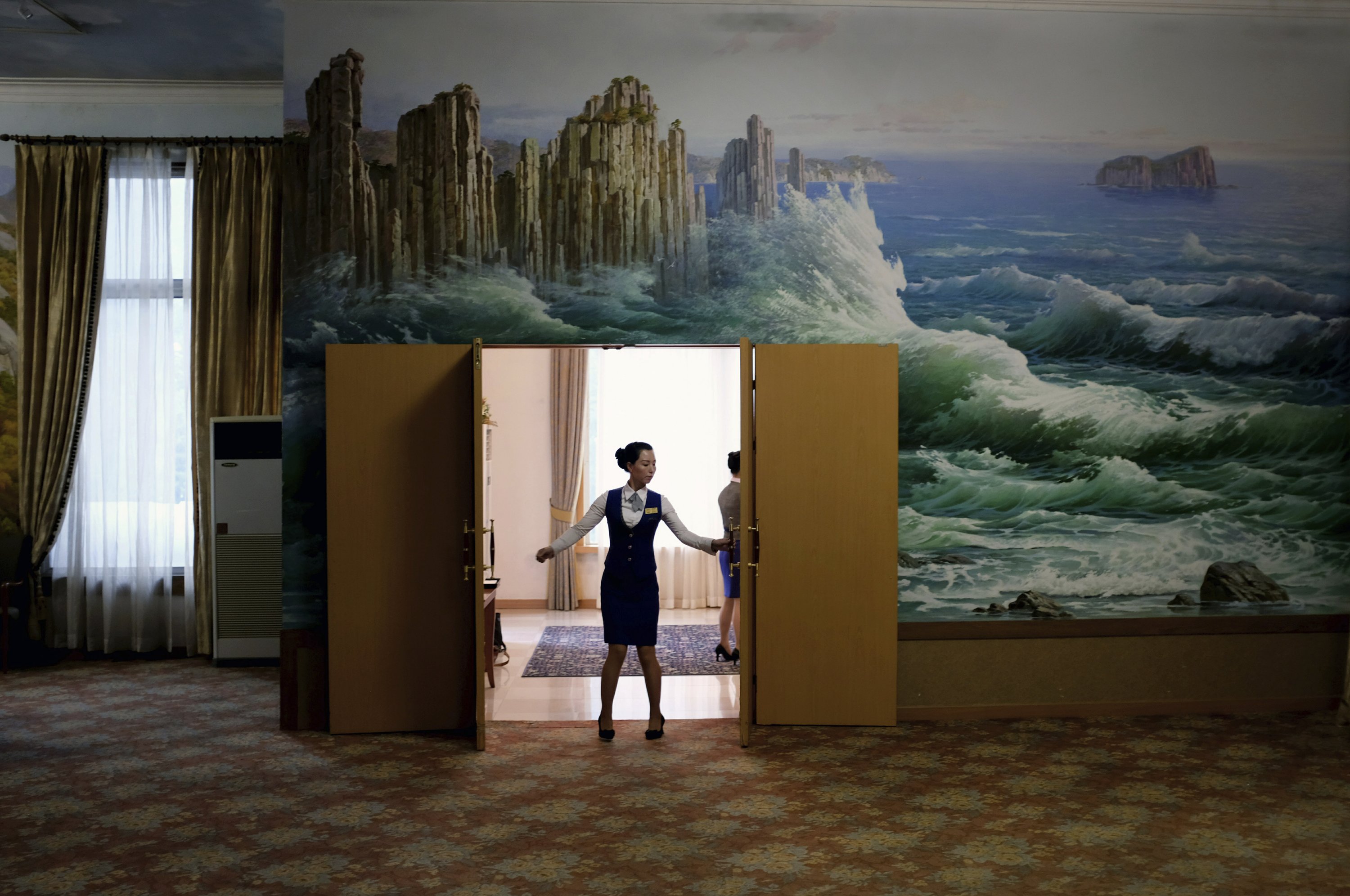 MOUNT KUMGANG, North Korea — The two-lane highway south from North Korea’s Mount Kumgang into and across the Demilitarized Zone is lined by tall green fences and street lamps that are only turned on for special occasions. Children play on a parallel stretch of railroad that hasn’t been in regular use since before they were born. Behind a solitary guard stands a sign saying it’s 68 kilometers (40 miles) to Sokcho, a town just across the DMZ in South Korea.

At the height of South Korea’s policy of engagement with the North, the “Diamond Mountain Resort” area was a symbol of cooperation. More than 2 million South Korean tourists came to visit and some of the South’s biggest corporations poured more than a billion dollars into what they hoped would be a world-class travel destination.

A decade after the North-South experiment in cooperation on Kumgang ended in bitter failure, North Korean leader Kim Jong Un and South Korean President Moon Jae-in want to give it another try. By the end of the year they hope to begin working on opening this stretch of road and rail.

The push to jointly develop Kumgang is a direct challenge to Washington’s policy of maintaining sanctions and “maximum pressure” until Pyongyang gives up its nuclear arsenal.
___

Chrystal chandeliers hang from the ceiling of the Kumgangsan Hotel, where a handful of North Korean tourists in Adidas sweatsuits gathers to catch a bus up the mountain. Elaborate murals of mountain scenery cover the walls of its second floor. In the cavernous lobby, there’s a souvenir shop, a white concert piano on a stage beside billiard and pingpong tables and a well-stocked bar. There’s a theater and a karaoke room.

The hotel is eerily silent, the quiet broken only by the occasional laughter of the local tourists and some scattered Chinese groups.

Built in the 1990s with hundreds of millions of dollars of South Korean investment, mostly from a branch of the Hyundai Group, the resort was in its heyday an oasis of luxury, with conga lines and Filipino lounge bands. Its 10 hotels featured opulent fixtures and oil paintings framed in gold. Guests had the run of an 18-hole golf course, now closed, and a hot springs spa, which remains open and popular with North Koreans. Today, the resort’s main role is to be the official venue for reunions of families divided by the 1950-53 Korean War.

The Kumgang project was troubled from its outset, when it opened to South Koreans in 1998.

Visitors from the South were allowed only day trips or visits of a few days. Initially they were brought in by ferry to minimize chances to see the North’s countryside or interact with its people. Later, they were allowed in on buses through the DMZ, with the curtains drawn until they had arrived.

The resort drew only a fraction of the 500,000 tourists projected to come annually. Within a few years of its opening, it was hemorrhaging money.

Its fate was sealed in July 2008, when a North Korean soldier shot dead tourist Park Wang-ja, a 53-year-old housewife from Seoul, after she allegedly wandered into a restricted area on a beach on the resort’s fringes. Seoul quickly suspended all travel to Kumgang. In 2011, the North announced it was seizing all assets and taking back control of all real estate rights.

The Hyundai affiliate is believed to have lost more than a billion dollars. Its Kumgang office sits padlocked and unoccupied near an arena that once housed a circus.
___

From their first summit in April, reopening the road and railway across the DMZ to Kumgang has been a top priority for Moon and Kim.

Moon has helped bring Kim out of the cold. He wants to expand economic ties with the North to build trust and defuse tensions, creating conditions for Kim to dismantle his nuclear arsenal. He also hopes to reopen another “Sunshine” era symbol, the jointly operated Kaesong industrial complex on the North’s side of the DMZ.

At their third summit, in September, Kim and Moon formalized Mount Kumgang’s role as the reunion venue, agreeing to “promptly restore the facility toward this end.” Their joint statement included plans for a ground-breaking ceremony for work to reopen cross-border railways and roads, including the ones near Kumgang, by the year’s end and to “normalize” the Kaesong industrial complex and Mount Kumgang tourism projects when the time is ripe.

Moon’s seeming readiness to scale back sanctions even before Pyongyang takes major steps to denuclearize is raising red flags in Washington. Such concerns spiked when South Korean Foreign Minister Kang Kyung-wha suggested Seoul might lift unilateral sanctions it imposed after an 2010 attack on a South Korean warship that killed 46 sailors.

Trump’s response was quick and, to many Koreans, deeply insulting.

Lim Soo-ho of the Seoul-based Institute for National Security said it’s all but impossible for South Korea to resume joint tours to Kumgang, operations at the Kaesong joint factory park or any other form of economic cooperation under the current international sanctions, which have strengthened significantly since 2016. Washington’s own sanctions against Pyongyang restrict an even broader range of economic activities and target a larger list of companies and individuals.

South Korea will never abandon the Kumgang joint tours or Kaesong factory park because they are such powerful symbols of inter-Korean cooperation, Lim said. But a less risky business environment for southern companies is needed, perhaps with a free trade agreement that would bring inter-Korean economic activities closer to global standards.

For now, ground-breaking ceremonies for projects not yet started are the best Seoul and Pyongyang can manage.
___

A special permit is required to get to the beach from the base of the mountains.

Winding through freshly harvested farmland, the rice still spread out on the roadsides to dry, travelers come to an imposing checkpoint manned by armed soldiers. A tall, electrified fence marks the entrance into the DMZ.

Pae Un Sim was a child during Kumgang’s boom years.

Leading the way down a gravel path to the rugged beach where the South Korean housewife was killed, she recalls meeting a tourist who said he once told everyone Yosemite National Park in the United States was the most beautiful mountain scenery in the world. He had to revise that after seeing the Alps, and again after seeing Kumgang.

The sun is setting. Lights along the North-South demarcation line can be seen flickering in the hills.

Pae stops to point to the ocean.

“If you look between those two little islands, you can see the South,” she said. “There used to be so many tourists. It was very lively.”

Asked about her impressions of the South Koreans who came to visit or her hopes for the future, she hesitated. Those topics are still perhaps too sensitive and too political to discuss freely. After some thought she voiced a commonly heard refrain.

“We Koreans are one people,” she said. “It is our common wish to be reunited.”