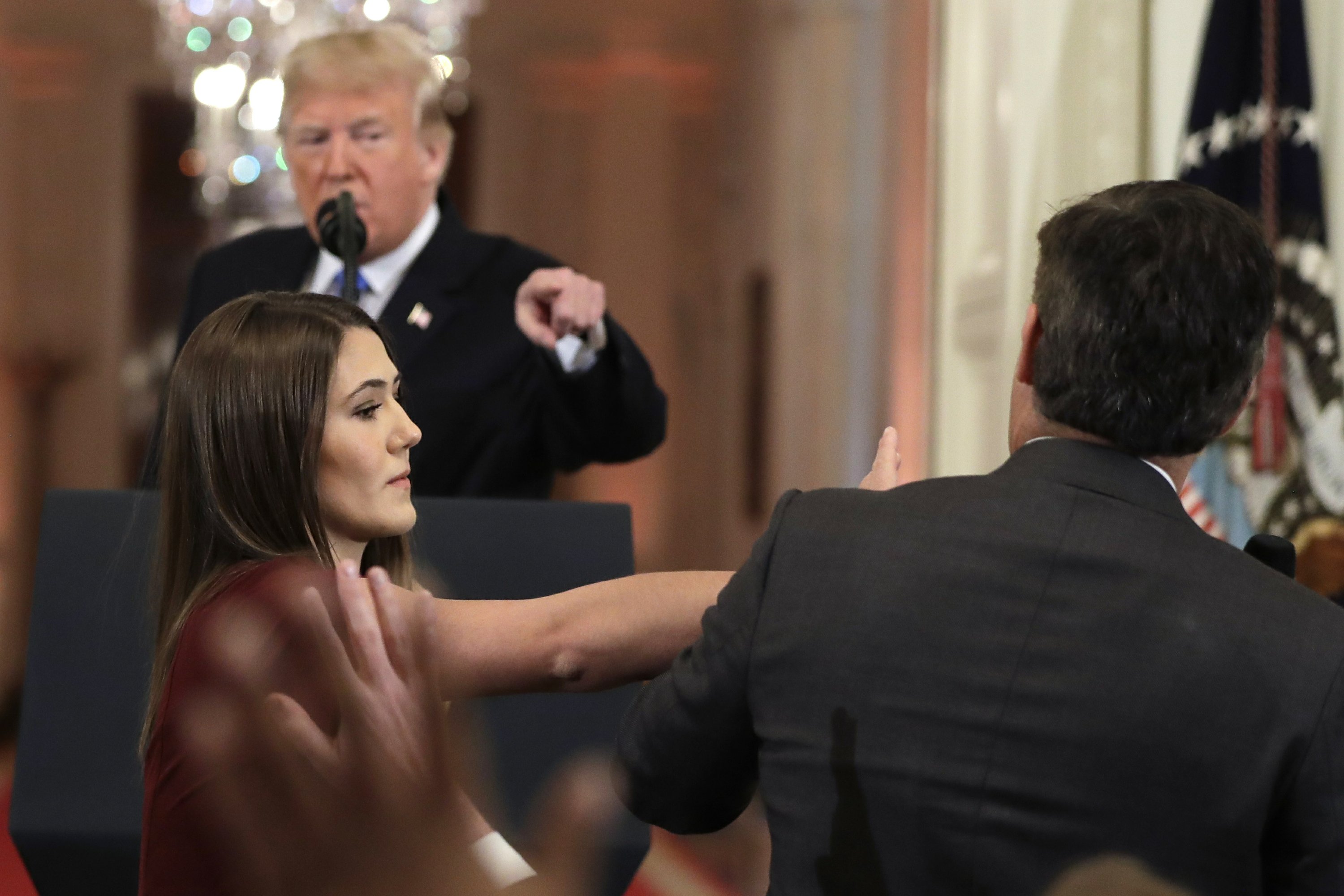 NEW YORK — The White House has suspended the press pass of CNN correspondent Jim Acosta after he and President Donald Trump had a heated confrontation during a news conference.

They began sparring Wednesday after Acosta asked Trump about the caravan of migrants heading from Latin America to the southern U.S. border. When Acosta tried to follow up with another question, Trump said, “That’s enough!” and a female White House aide unsuccessfully tried to grab the microphone from Acosta.

White House press secretary Sarah Huckabee Sanders released a statement accusing Acosta of “placing his hands on a young woman just trying to do her job as a White House intern,” calling it “absolutely unacceptable.”

The interaction between Acosta and the intern was brief, and Acosta appeared to brush her arm as she reached for the microphone and he tried to hold onto it. “Pardon me, ma’am,” he told her.

Acosta tweeted that Sanders’ statement that he put his hands on the aide was “a lie.”

CNN said in a statement that the White House revoked Acosta’s press pass out of “retaliation for his challenging questions” Wednesday, and the network accused Sanders of lying about Acosta’s actions.

President Donald Trump sparred with reporters at his post-election news conference, ordering several to sit down and telling another he’s a “rude, terrible” person. (Nov. 7)

″(Sanders) provided fraudulent accusations and cited an incident that never happened. This unprecedented decision is a threat to our democracy and the country deserves better,” CNN said. “Jim Acosta has our full support.”

Journalists assigned to cover the White House apply for passes that allow them daily access to press areas in the West Wing. White House staffers decide whether journalists are eligible, though the Secret Service determines whether their applications are approved.

The post-midterm election news conference marked a new low in the president’s relationship with journalists.

“It’s such a hostile media,” Trump said after ordering reporter April Ryan of the American Urban Radio Networks to sit down when she tried to ask him a question.

The president complained that the media did not cover the humming economy and was responsible for much of the country’s divided politics. He said, “I can do something fantastic, and they make it look not good.”

His exchanges with CNN’s Acosta and NBC News’ Peter Alexander turned bitterly personal, unusual even for a forum where the nature of their jobs often put presidents and the press at odds.

“I came in here as a nice person wanting to answer questions, and I had people jumping out of their seats screaming questions at me,” said Trump, who talked for nearly 90 minutes despite the run-ins with reporters.

Acosta asked Trump why the caravan of migrants was emphasized as an issue in the just-concluded midterm races, and he questioned Trump’s reference to the caravan as an invasion.

“You should let me run the country,” Trump said. “You run CNN and if you did it well, your ratings would be much better.”

After Acosta asked about the investigation of Russia’s involvement in the 2016 election, Trump tried to turn to Alexander, but Acosta continued to ask questions.

Alexander came to his colleague’s defense. “I’ve traveled with him and watched him,” Alexander said. “He’s a diligent reporter who busts his butt like the rest of us.”

“I’m not a big fan of yours, either,” Trump replied.

“I understand,” Alexander said, attempting to ask a question. Acosta stood back up and noted the explosive devices that were recently sent to CNN and some of the president’s political opponents.

“Just sit down,” Trump said. “When you report fake news, which CNN does a lot, you are the enemy of the people.”

CNN said Trump’s attacks on the press have gone too far.

“They are not only dangerous, they are disturbingly un-American,” CNN tweeted after the exchange. “While President Trump has made it clear he does not respect a free press, he has a sworn obligation to protect it. A free press is vital to democracy, and we stand behind Jim Acosta and his fellow journalists everywhere.”

In announcing Acosta’s suspension, Sanders said, “The fact that CNN is proud of the way their employee behaved is not only disgusting, it is an example of their outrageous disregard for everyone, including young women, who work in this administration.”

The White House Correspondents’ Association released a statement Wednesday saying it “strongly objects to the Trump Administration’s decision to use U.S. Secret Service security credentials as a tool to punish a reporter with whom it has a difficult relationship. Revoking access to the White House complex is a reaction out of line to the purported offense and is unacceptable.”

The WHCA called on the White House to “immediately reverse this weak and misguided action.”

During the news conference, Trump also turned on reporter Yamiche Alcindor of PBS’ “NewsHour.” She said that “on the campaign trail, you called yourself a nationalist. Some people saw that as emboldening white nationalists.” Trump interrupted her, calling it a racist question.

Alcindor pressed on: “There are some people who say the Republican Party is seen as supporting white nationalists because of your rhetoric. What do you say to that?”

“What you said is so insulting to me,” he said. “It’s a very terrible thing you said to me.”

Alcindor moved on to a different topic. Later, via Twitter, she said that she has interviewed white nationalists who say they are more excited by Trump than they have been about other presidents. “Even if President Trump doesn’t intend it, some see him as directly appealing to the racists,” she wrote.

Trump told Ryan, of American Urban Radio Networks, repeatedly to sit down when she attempted to ask Trump about accusations of voter suppression. He said she was rude for interrupting another reporter, though he did briefly answer one of Ryan’s questions.