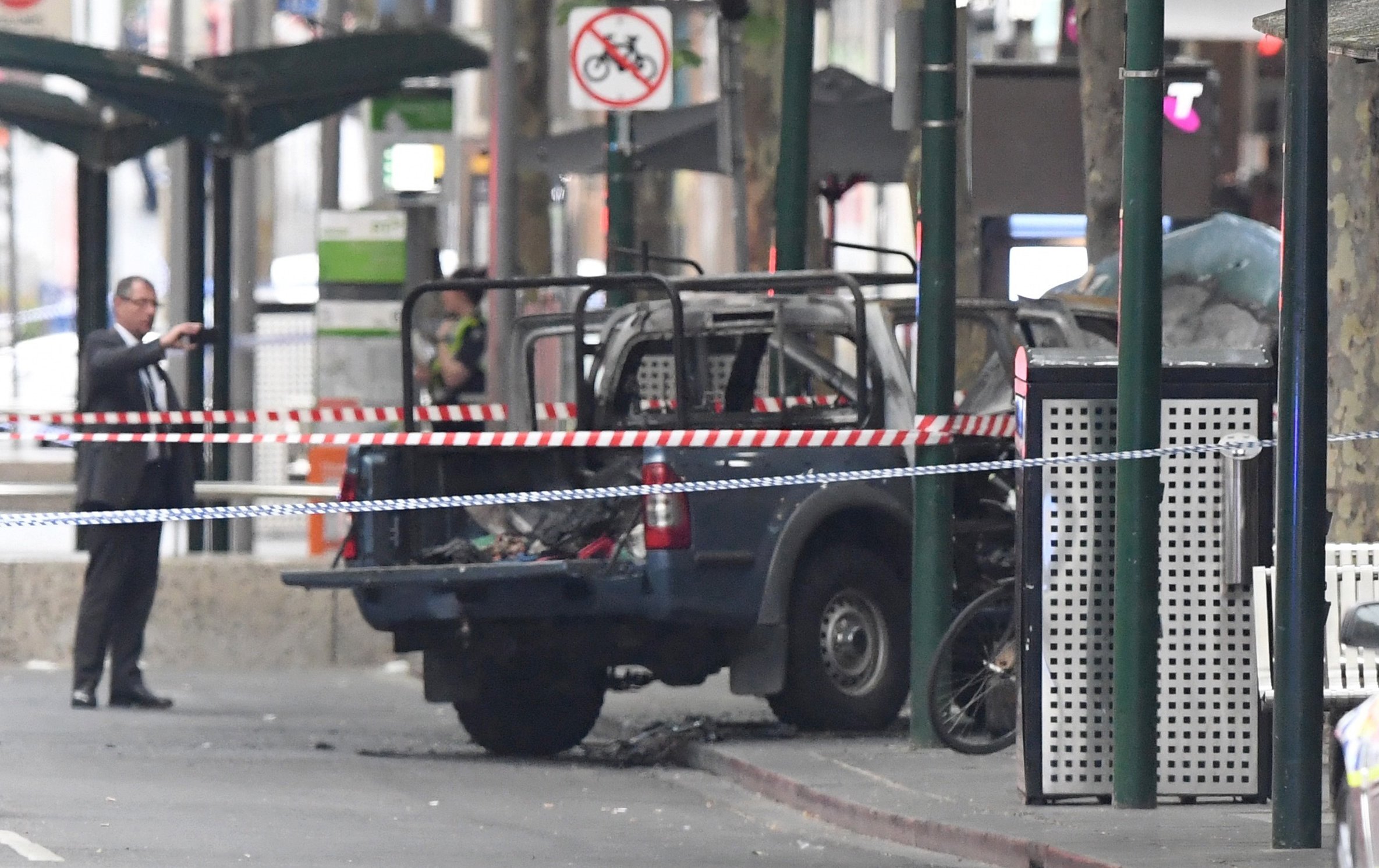 SYDNEY — A knife-wielding man stabbed three people, one fatally, in Australia’s second-largest city on Friday in an attack police linked to terrorism.

The attack during the afternoon rush hour brought central Melbourne to a standstill. Hundreds of people watched from behind barricades as police tried to apprehend the attacker.

Police said the man got out of a pickup truck, which then caught fire, and attacked three bystanders with a knife. He also attempted to attack police who arrived on the scene before being shot in the chest by an officer.

The suspect died later at a hospital. One of the victims also died, while the two others were hospitalized.

Police said the attacker’s vehicle contained several barbecue gas cylinders in the back. A bomb squad rendered them safe without any exploding.

Victoria state police Commissioner Graham Ashton said the suspect, who was originally from Somalia, was known to police and the incident was being treated as terrorism.

“From what we know of that individual we are treating this as a terrorism incident,” Ashton told reporters, adding that the police counterterrorism command was working on the case, as well as homicide detectives.

“He’s known to police mainly in respect to relatives that he has which certainly are persons of interest to us, and he’s someone that accordingly is know to both Victorian police and the Federal intelligence authorities,” he said.

The Islamic State group claimed responsibility for the attack in a statement released through its Aamaq media arm. It said the man was “one of Islamic State fighters” and had responded to IS calls for attacks in countries that are part of the international coalition fighting the militants in Syria and Iraq.

IS, which has suffered heavy battlefield setbacks in the past year, often claims attacks in an opportunistic vein.

The attack occurred on the eve of a busy weekend in Melbourne, with a major horse race scheduled for Saturday and a national league soccer match the following day. Sunday is also Remembrance Day, when memorial ceremonies for World War I are held.

Ashton said police were “doing security reassessments of these events in light of what’s occurred,” but there was “no ongoing threat we’re currently aware of in relation to people surrounding this individual.”

“Australians will never be intimidated by these appalling attacks and we will continue to go about our lives and enjoy the freedoms that the terrorists detest,” he said in a statement.

One witness said one of the stabbing victims, believed to be a man in his 60s who later died, was stabbed in the face, and that desperate efforts were made to save him.

“Because he was on his stomach, they turned him over to see if he’s all right, he was still alive,” the witness, Markel Villasin, told Australian Associated Press.

“He was breathing and he was bleeding out.”

Video from the scene showed a man swinging a knife at two police officers near a burning car before he was shot.

In December 2014, a 17-hour siege in which a gunman took 18 people hostage in a Sydney cafe ended with two hostages dead and the gunman killed by police. Though the erratic gunman demanded that police deliver him an Islamic State flag at the outset of the crisis, there was no evidence he had established contact with the militant group.

However, at a later inquest, the coroner of New South Wales state said the gunman’s actions fell “within the accepted definition of terrorism.”

Melbourne was also the scene of two fatal car-ramming incidents last year, but neither was linked by police to terrorism.