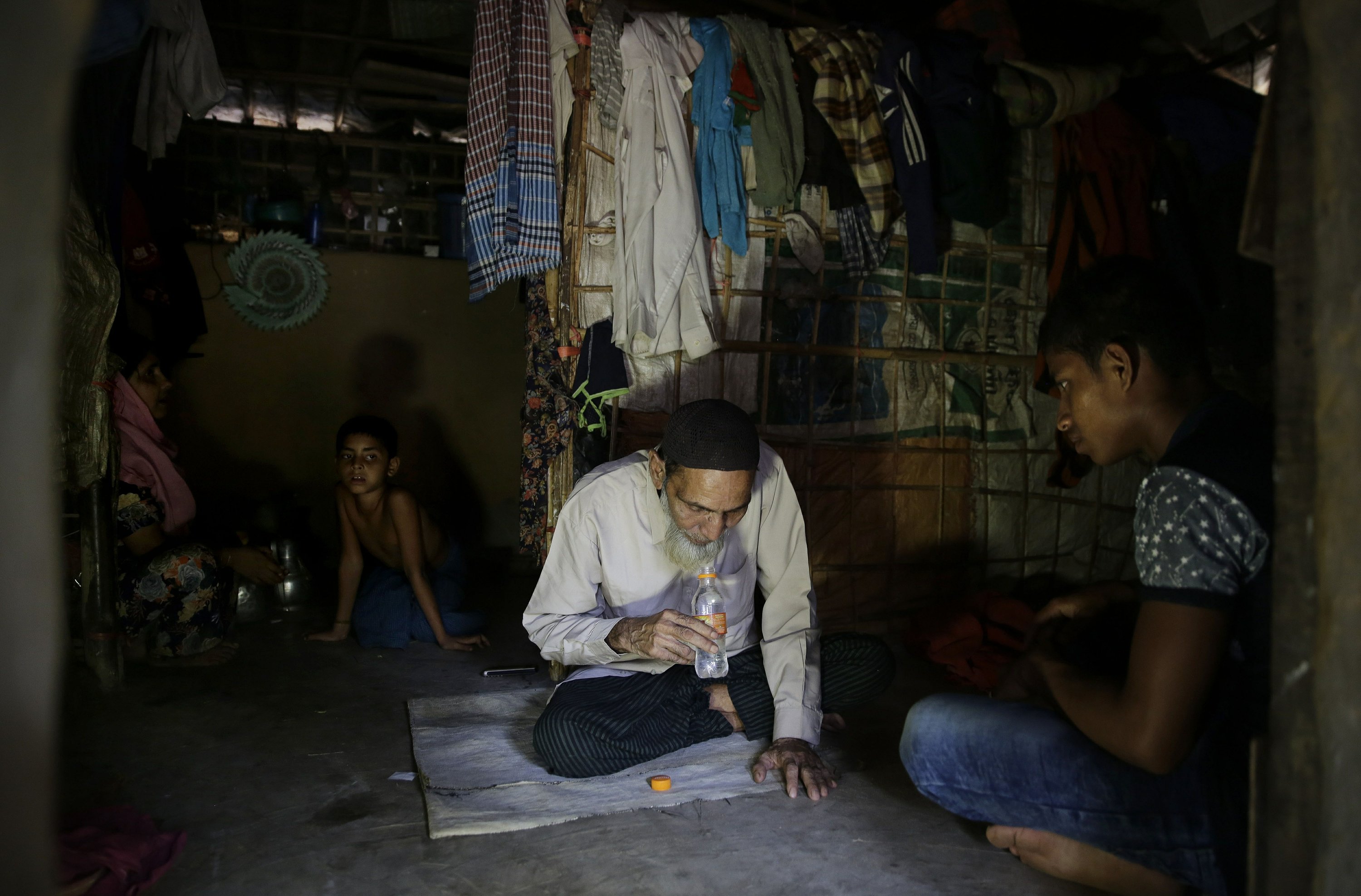 KUTUPALONG, Bangladesh — Abul Kalam sits cross-legged on the floor of his tiny mud hut and whispers prayers into a small plastic bottle filled with water, creating what he says is a potion that will cure stomach cramps.

“I got these powers in my dreams,” he says. “People come to me because I heal them.”

Kalam is a boidu, or faith healer, and for decades has been treating fellow Rohingya Muslims, first in Myanmar’s northern Rakhine state and now in a squalid camp in Bangladesh, where 700,000 Rohingya took refuge last year after escaping a campaign of government violence at home.

Faith healers have long been sought out in Rohingya society to treat physical and mental ailments. Their trade has thrived in part because of traditional beliefs and in part because Rohingya have lacked access to modern medical care in Buddhist-majority Myanmar, where they are one of the most persecuted minority groups in the world.

Access to medical care has changed for the better in Bangladesh, where thousands of aid workers offer Rohingya everything from vaccinations to psychological support.

Doctors Without Borders, which runs four inpatient hospitals and a dozen medical centers in the area, says it has provided more than 800,000 outpatient consultations and admitted more than 15,000 patients since August 2017.

Yet many Rohingya still seek out their faith healers.

Kalam, a 60-year-old who arrived in Bangladesh in 2012 in an earlier exodus of Rohingya, says he receives more than five clients each day.

“People come to me because they benefit from my power,” he says. “That’s why they keep coming back.”

Myanmar officials have said they expect the repatriation of Rohingya to start this week, a move criticized by rights groups who say it is not yet safe for them to return.

Anita Saha, a clinical psychologist who has worked in the camps since August 2017, says Rohingya refugees’ dependence on faith healers stems from a lack of exposure to doctors and a suspicion of scientific medicine.

She says many refugees mistakenly believe they will lose their Islamic faith and be converted to Christianity if they take vaccinations for diseases like cholera and diphtheria. And in the case of mental illness, she says, many believe it is a reflection of evil forces and is best countered by a faith healer invoking prayer.

“They don’t have any doctors to prescribe psychotropic drugs. So, they believe in the boidus to overcome their problem,” Saha says.

She says beliefs in the camps are slowly changing.

Ali Nesa has never known what’s wrong with her teenage daughter, who spends her days in the refugee camp lying on the floor of her family’s thatch hut, unable to talk, walk or eat on her own.

Nesa says her daughter has been this way since she was 3, when she had epileptic fits for nearly two weeks straight.

“I don’t know if her disease is due to an evil spirit or because of difficulty in breathing,” Nesa says. “If this is because of an evil spirit, then only a boidu can treat her. If it is a breathing problem, then a doctor may be able to help her.”

Nesa says none of the many boidus she has visited has been able to help her daughter and she is losing her faith in them. She’s now interested in seeking medical help.

“I can’t be worried by what people have to say,” he says.

“Maybe the doctor will say what does a boidu know? I don’t want to answer them. I don’t need to fight them.”