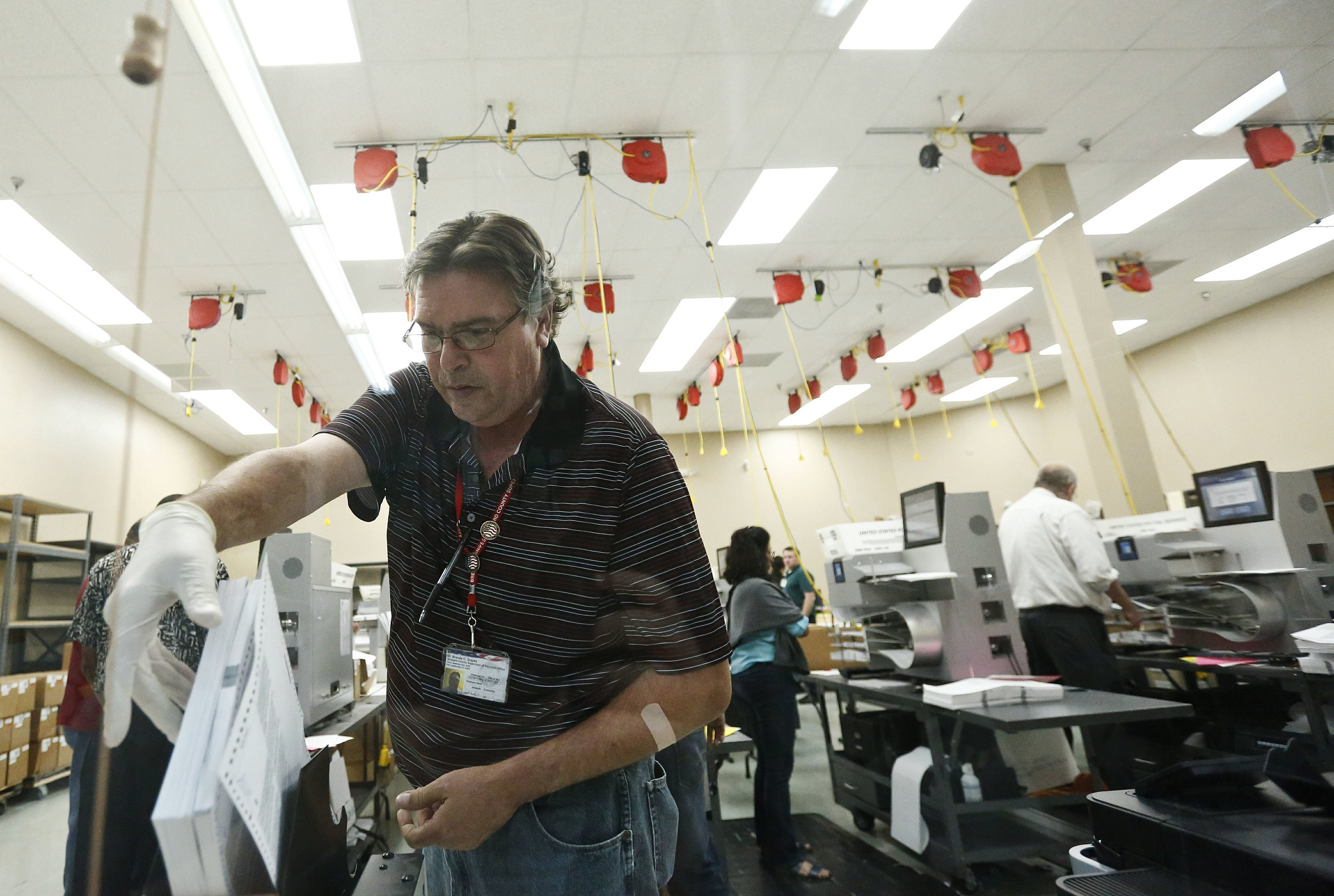 FORT LAUDERDALE, Fla. — A new problem complicated Florida’s ongoing recount battle as lawyers headed back to court on Wednesday: Palm Beach County’s tallying machines have overheated, causing mismatched results with the recount of 174,000 early voting ballots. Now workers are re-doing that part of the recount, making it even more unlikely that legal deadlines will be met.

A mechanic was flown in to fix the problems, but “we don’t have a lot of assurances,” Palm Beach County Elections Supervisor Susan Bucher told WPTV Tuesday night.

This is only the latest complication in Florida’s legally mandated vote recount, which is drawing national attention, including a stream of tweets from President Donald Trump.

Bucher said the county’s 11-year-old machines began having problems on Monday as early voting ballots were being counted in the U.S. Senate race. They “started overheating so as a result the tally types are not reconciling properly.” And when the totals were added up on Tuesday, they didn’t match.

Workers are feeding ballots into the machines around the clock, but the machines can only tally one race at a time, and Bucher has already said they will not meet the state’s Thursday deadline to report the recounted votes.

Meanwhile, lawyers for Democrats planned to ask a federal judge on Wednesday to set aside the state law mandating that mailed-in votes be thrown out if the signature on the envelope doesn’t match the signature on file with election authorities.

Trump on Tuesday called on Democratic Sen. Bill Nelson to admit that he lost his re-election bid to Republican Gov. Rick Scott. Trump implied, again without evidence, that officials in two pivotal South Florida counties are trying to steal the election.

“When will Bill Nelson concede in Florida?” Trump wrote. “The characters running Broward and Palm Beach voting will not be able to ‘find’ enough votes, too much spotlight on them now!”

There have been other bumps as Florida undergoes recounts for both the governor and Senate races.

In oft-criticized Broward County, additional sheriff’s deputies were sent to guard ballots and voting machines, a compromise aimed at alleviating concerns. But Broward’s supervisor has said the county will meet Thursday’s deadline.

Not so in Palm Beach, where Bucher said the machines aren’t fast enough. The county is doing the Senate race first and will then do the governor’s race. If the deadline is not met in a race, the results it reported Saturday will stand. Both counties are Democratic strongholds.

Still, the state elections department and the Florida Department of Law Enforcement, both run by Republican appointees, have said they have seen no evidence of voter fraud. A Broward County judge challenged anyone who has evidence of fraud to file a report.

While the counting goes on, there are now four lawsuits pending in a Tallahassee federal court that seek to throw out ballot counting rules or extend deadlines for recounts.

Marc Elias, a campaign attorney for Nelson, argued ahead of the looming court battle that “we should all be able to agree that the goal here is a legal and accurate count.” Republicans have responded by contending that Democrats want to bend or skirt existing election laws to alter the outcome.

“We got to keep the heat on these people to make sure they follow the law,” said Republican U.S. Rep. Francis Rooney to reporters on a recount update organized by Scott’s campaign.

Presidents have historically sought to rise above the heated partisan drama surrounding election irregularities. Former President Barack Obama wasn’t so publicly involved when a recount and legal process in the 2008 election delayed a Democrat taking a Minnesota Senate seat until July 2009. Former President Bill Clinton struck a lower tone during the 2000 presidential recount, which also centered on Florida.

But this Florida recount has been personal for Trump. He aggressively campaigned in the state, putting his finger on the scales of the Republican gubernatorial primary this summer by endorsing former Rep. Ron DeSantis for governor. After Election Day, Trump’s aides pointed to the GOP’s seeming success in the state as a validation that the president’s path to re-election remained clear — a narrative that has grown hazier as the outcomes have become less certain.

White House spokeswoman Mercedes Schlapp said Tuesday the president “obviously has his opinion” on the recount.

“It’s been incredibly frustrating to watch,” she said.

“It’s just plain wrong. It’s un-American.” Schumer said. “If he really wants an honest and fair election, President Trump will stop bullying, harassing and lying about the vote in Florida, and let the election proceed without the heavy hand of the president tipping the scale of justice.”

Once the machine recount is complete, a hand recount will be ordered in any race where the difference is 0.25 percentage points or less, meaning it could take even longer to complete the review of the Senate race if the difference remains narrow.

If the Senate race does go to a hand recount, the deadline for counties to finish is Sunday. But two of the pending four lawsuits ask that a federal judge delay the deadlines so that all counties can finish processing the crush of ballots.

Elias argued that there’s no need to rush, since the winner of the Nelson-Scott race won’t be sworn into office until January.