2 dead, 44 hurt in bus crash on icy highway near Memphis 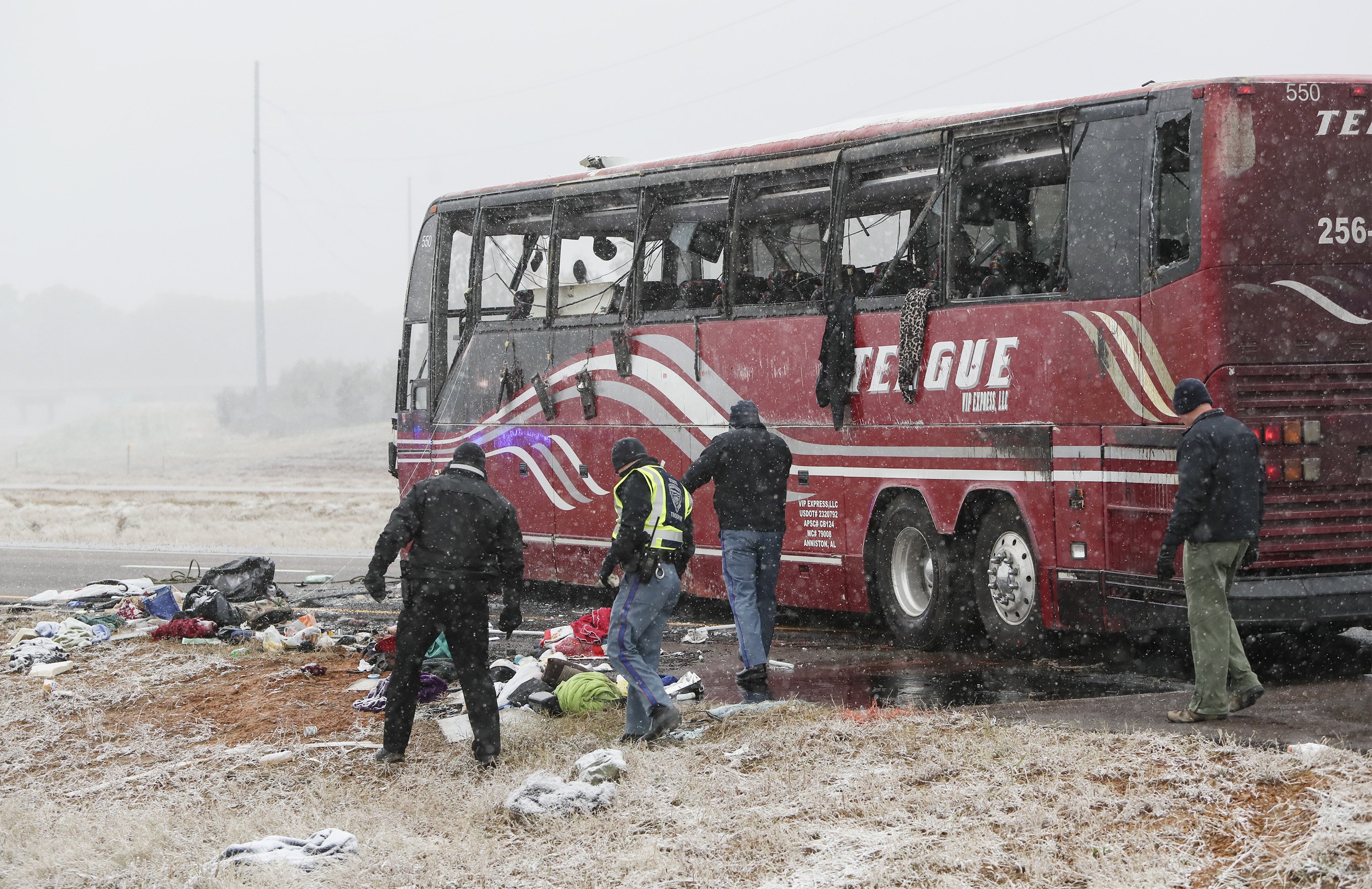 BYHALIA, Mississippi — A tour bus overturned Wednesday on an icy highway near Memphis, leaving two people dead and 44 others aboard with injuries as a pre-winter storm blasted parts of the South, authorities said.

The Mississippi Highway Patrol said in a statement that the bus traveling from Huntsville, Alabama, to the Tunica area of Mississippi when it crashed at 12:35 p.m. on Interstate 269 in the northern part of the state. A statement from agency spokesman Capt. Johnny Poulos also said the crash “weather-related.” He didn’t elaborate, though he said the injured were taken to several hospitals with varying injuries.

The bus was operated by Teague VIP Express, located in Anniston, Alabama. The company posted a message on its Facebook page that said: “Our hearts and prayers go out to victims of this tragedy. Please keep everyone involved and families in your prayers.”

The red tour bus with white and gray stripes was being towed later Wednesday from the crash site. The bus windows appeared mostly missing or shattered and a smell of gasoline hung in the air. Large scratches and other damage were visible on the driver’s side as workers cleared the highway of debris.

Authorities say two people have died and several others are injured, some critically, after a tour bus overturned on an icy highway ramp in northern Mississippi. (Nov. 14)

The company has only three buses and three drivers, according to licensing information from the Federal Motor Carrier Safety Administration, and it hasn’t had any crashes in the last two years.

An additional 18 passengers were taken to Methodist Hospital Olive Branch in that Mississippi city, said spokeswoman Mary Alice Taylor. The hospital couldn’t immediately provide conditions of those patients. The crash site is about 35 miles (55) miles southeast of Memphis.

The identities of the dead and injured were not immediately released and the specific end destination wasn’t disclosed in Tunica, a casino resort area of northwest Mississippi.

It was the second charter bus excursion to a Mississippi casino town to end in fatalities in the last two years. A bus carrying Texas senior citizens to a Gulf Coast casino in Biloxi, Mississippi, got stuck on train tracks and was slammed by a freight train in March 2017. The crash resulted in four deaths and 38 injuries. The National Transportation Safety Board found that the probable cause of the crash was the failure of a railroad and the city to work together to improve the safety of a sharply humped railroad crossing, even though it was well known that vehicles occasionally got stuck there.

On Wednesday, the Mississippi Department of Transportation reported icing on roads and bridges in 10 northern counties from the storm. A wintry mix of snow and sleet prompted some school, church and museum closings in west Tennessee during the day.

After days of heavy rain and storms along a cold front, flurries left a thin layer of snow atop vehicles in western Mississippi overnight, and a Mississippi River bridge turned white in Greenville, Mississippi. Light snow or freezing rain was possible with no accumulations into northwest Alabama, forecasters said.

The National Weather Service, meanwhile, issued a freeze warning for Louisiana through western Alabama as far south as the Gulf Coast into early Thursday, saying temperatures could drop into the upper 20s (- 6 Celsius range) in some areas. A flash flood watch remained in effect for north Georgia and the Carolinas, which forecaster say could get another 3 inches (8 centimeters) of rain.

In Virginia, NASA said, the planned launch early Thursday of an unmanned cargo rocket to the International Space Station had to be rescheduled because of bad weather. NASA said the launch would now take place early Friday. The unmanned Cygnus cargo craft will lift off from Wallops Island along the Eastern Shore carrying groceries, hardware and research to the station.