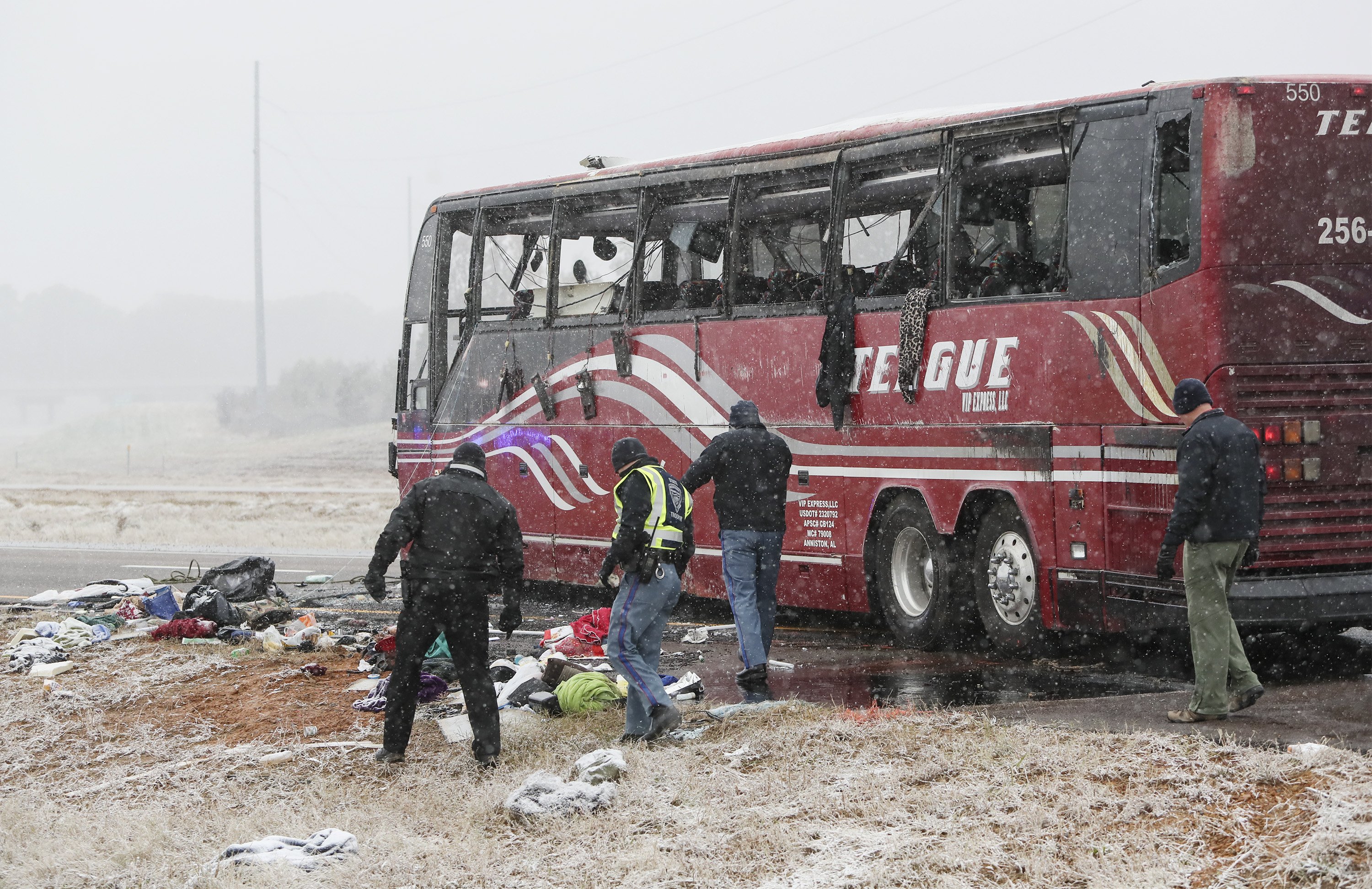 BYHALIA, Miss. — A pre-winter storm slammed parts of the South and lower Midwest, causing five deaths on slippery roads and stranding travelers for more than eight hours on an icy Arkansas interstate.

The wintry weather was barreling eastward Thursday, with snow and ice expected from Ohio and the Appalachian Mountains through Washington, D.C., New York and New England.

Snow fell as far southeast as central Alabama, which got a dusting. While wintry precipitation is unusual in the Deep South so early in the season, forecasters said the overnight trace missed setting a record for earliest snow by about two weeks.

In Mississippi, a tour bus bound for a casino overturned , leaving two people dead and 44 others injured. And in the Little Rock, Arkansas, area, three people were killed in separate crashes on icy roads Wednesday night, while Interstate 40 was shut down overnight in the eastern part of the state because of several crashes near the White River bridge. The interstate reopened shortly before daybreak Thursday, but officials said traffic was slow-going because some drivers had fallen asleep.

Snow could be seen blowing past the St. Louis Gateway Arch early Thursday morning as a major winter storm is forecast to produce a swath of snow from the middle part of the Mississippi Valley to the northeast. (Nov. 15)

Witnesses told Mississippi investigators the tour bus driver lost control after crossing an icy overpass and the bus rolled over on its driver’s side, coming to rest in median of Interstate 269 in Byhalia around 12:35 p.m., said Mississippi Highway Patrol spokesman Capt. Johnny Poulos.

“All of a sudden the bus started swerving then it spun around two times, hit the rail and then flipped over,” bus passenger Veronica Love told news outlets as she left a hospital after the wreck. “The second spin, it started picking up speed. It was, I mean, what could you do?”

Officials said the group was traveling from Huntsville, Alabama, to gamble at a casino in Mississippi’s Tunica County, about 40 miles (65 kilometers) to the west.

Around the upper South, meanwhile, the storm spread scattered sleet and light snow Wednesday. And in Virginia, NASA said, the planned launch early Thursday of an unmanned cargo rocket to the International Space Station had to be rescheduled by one day because of the weather. The unmanned Cygnus cargo craft is now scheduled to lift off early Friday from Wallops Island on the Eastern Shore carrying supplies and research materials for the astronauts at the space station.