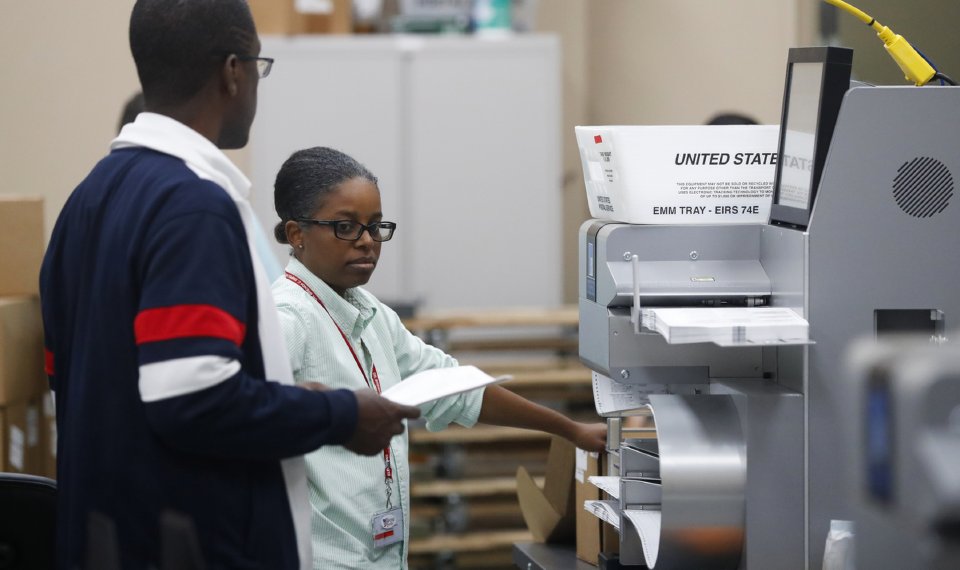 FORT LAUDERDALE, Fla. — Florida’s election started badly when Hurricane Michael disrupted early voting in some Panhandle counties. Long lines, ballot shortages and other problems followed statewide, both during early voting and on Election Day. Now the state is having recounts in its U.S. Senate and governor races.

Because of the 2000 presidential recount fiasco and Florida being the largest swing state, any election problems it incurs immediately become a national crisis — one that President Donald Trump and Republican Gov. Rick Scott inflamed by accusing elections supervisors in two major Democratic counties of fraud without offering evidence. State law enforcement and elections officials have said no fraud complaints have been filed.

In the Senate race, Scott’s lead over incumbent Democratic Sen. Bill Nelson is 0.14 percentage point — about one vote for every 700 cast. In the governor’s contest, unofficial results show Republican former Rep. Ron DeSantis ahead of Democratic Tallahassee Mayor Andrew Gillum by 0.41 percentage point.

So how does the recount work? What problems have been reported? Is Florida really that screwed up? And do Nelson and Gillum have a shot?

HOW THE RECOUNT WORKS

For now, it’s simple. Florida’s 67 county elections offices run the ballots through the tallying machines a second time. Not all counties are created equal, however — small counties have only a few thousand votes, while Miami-Dade has 800,000. Overall, 8 million votes were cast. The counties’ deadline is Thursday afternoon, pending court action seeking to extend it. Some are already done, including Miami-Dade.

Here’s where it gets tricky. If the statewide margin between the candidates after the machine recount is less than 0.25 percentage point — one vote for every 400 cast — the counties conduct a manual recount. During the initial recount, the machines set aside any ballots that cannot be tallied. During a manual recount, only those ballots are re-examined to see whether the voter skipped the race or marked the ballot in a way that cannot be machine read but can be deciphered.

For example, in most counties voters fill a bubble for their candidate. But some mark the bubble with an X or circle the name. Others cross out one bubble and fill another. If the voter’s intention is clear, that ballot is counted. If not, it isn’t.

The results will be presented to the state’s canvassing board, for final approval — that’s scheduled for next week, pending court action. Scott would normally sit on the panel, but he recused himself Wednesday. Typically, the board’s approval is perfunctory. The state did not respond to a query asking what happens if the board refuses to certify the results.

Several problems, real and perceived, have cropped up in the counting and casting of ballots — some worse than others.

Democratic-dominated Broward and Palm Beach, the state’s second- and third-most populous counties, were both slow to complete their counts. That’s why Nelson and Gillum gained ground in the days after the election. That led to accusations by Trump, Scott and others that something nefarious was afoot — but they offered no evidence and a slow count is not illegal.

While Florida’s other 65 counties all tallied at least 99 percent of their votes by noon the day after the election, by that time Broward stood at 94 percent and Palm Beach at 96, an Associated Press analysis showed. Broward blamed its lengthy ballot, which included 10 county charter amendments, while Palm Beach blamed aging voting equipment. However, a quick count is not required: State law says the initial tally must be finished four days after the election and Broward and Palm Beach met the deadline.

“If it didn’t take up to four days, the law wouldn’t have put that in there,” said Eugene Pettis, attorney for Brenda Snipes , the county’s elections supervisor.

Broward also accidentally counted 22 provisional ballots that had been deemed ineligible, mostly because the signatures on the envelopes didn’t match those on file. Snipes acknowledged the error.

Palm Beach Elections Supervisor Susan Bucher said her county might not make Thursday’s original deadline because its tabulation machines may not be fast enough. If a county’s recount in a race is incomplete, its pre-recount tally stands.

But Broward and Palm Beach weren’t the only counties with possible or actual irregularities.

For example, in Republican-dominated Bay County, Elections Supervisor Mark Andersen accepted 147 ballots by email, even though that’s barred by state law. Andersen said the voters were displaced by Hurricane Michael, telling a Panhandle television station that anyone who objects “ought to be ashamed.”

IS FLORIDA REALLY MORE SCREWED UP THAN OTHER STATES?

That’s subjective, but Florida’s mistakes are magnified because the electorate is equally split. Voting problems in overwhelmingly Democratic states like California and New York or in Republican states like Texas and Utah do not get any attention because they don’t change statewide outcomes.

Ballots got wet and couldn’t be read last week in New York City. In Utah, some counties didn’t have enough machines, causing hourslong lines. Google any state and “voting problem” and chances are you will find something.

CAN NELSON OR GILLUM STILL WIN?

Unlikely, though Nelson’s odds are better than Gillum’s. Recounts that flip races are rare and candidates who have succeeded overcame much smaller deficits.

In the 2008 Minnesota Senate recount, Democrat Al Franken overcame an initial 206-vote gap to win by 312 votes. In the 2004 Washington governor’s race, Democrat Christine Gregoire trailed by 261 votes in the initial count, but won by 133 after the recount.