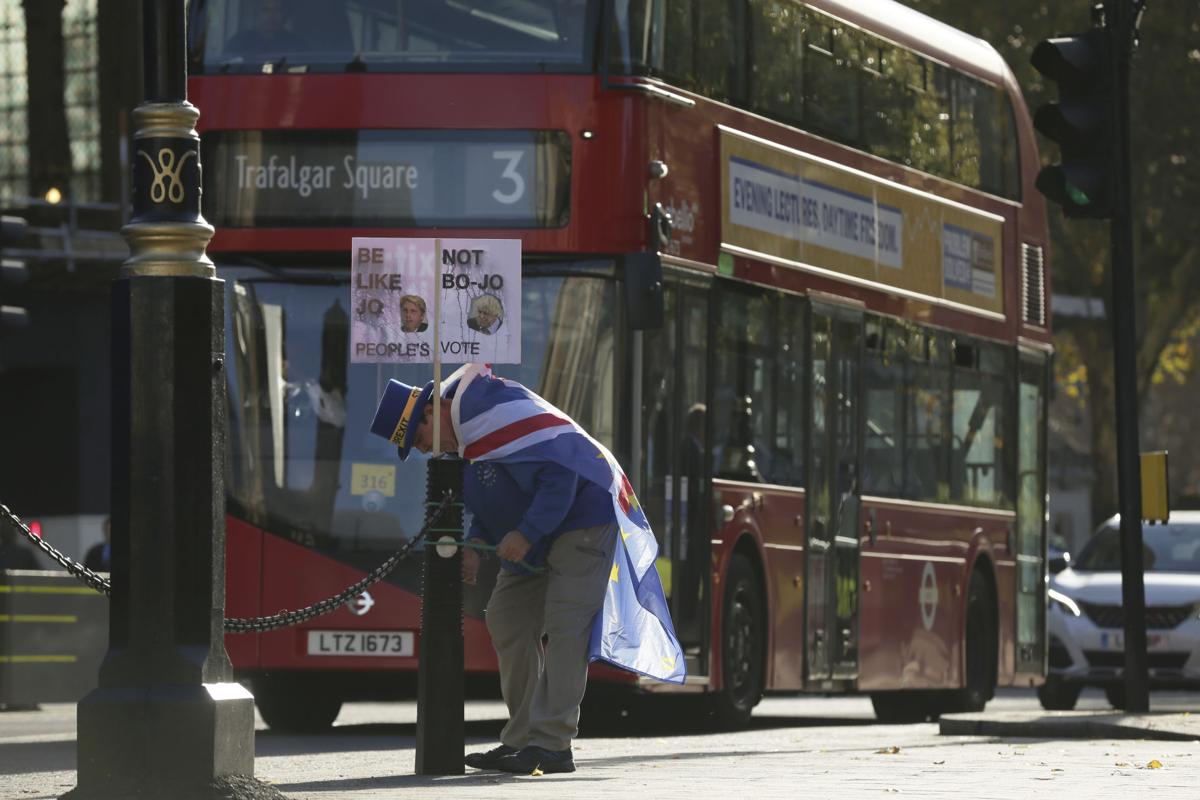 LONDON — The Latest on Brexit negotiations (all times local):

The European Parliament’s Brexit point-man Guy Verhofstadt is welcoming the draft withdrawal agreement governing Britain’s departure but says he still regrets that the country is leaving.

Verhofstadt tweeted Wednesday that “while I hope one day the U.K. will return, in the meantime this agreement will make a Brexit possible.”

He says it will help maintain “a close relationship between the EU and U.K., a protection of citizens’ rights and the avoidance of a hard Irish border.”

The European Parliament must endorse the Brexit agreement, along with the U.K. parliament and EU leaders, before it can enter force on March 29.
___

Maas said in a statement late Wednesday that after “after months of uncertainty we now finally have a clear signal from Great Britain, how the departure can happen in an orderly way.”

He cautioned that “there is still a way to go” and further work is needed on both sides.

Maas added that Germany wants to “continue to have the closest possible relations with our British friends. For this we have now gone a decisive step further.”

He said the remaining 27 EU members would carefully examine the draft agreement, adding that it’s important “the rules of the single market aren’t infringed upon.”
___

European Union Brexit negotiator Michel Barnier says the draft deal accepted by Britain is a decisive step in the talks and is signaling that EU leaders can convene a summit soon to endorse it.

Barnier told reporters Wednesday that “this accord represents a decisive step toward concluding this negotiation.”

He added: “I consider that we have achieved ‘decisive progress,’” the announcement that EU leaders have been awaiting from him to call a summit.

Barnier didn’t directly address the summit or its possible date, although Irish Prime Minister Leo Varadkar has said that a leaders’ meeting is penciled in for Nov. 25.

Barnier and European Council President Donald Tusk, who chairs leaders’ summit, are scheduled to address the media in Brussels at 0710 GMT (2:10 a.m. EST) on Thursday.
___

British Prime Minister Theresa May says her Cabinet has backed a draft Brexit deal with the European Union after an “impassioned” debate.

May emerged from a five-hour Cabinet meeting to say agreement had been reached.

She said: “This is a decisive step which allows us to move on and finalize the deal in the days ahead.”
___

Some pro-Brexit lawmakers in Prime Minister Theresa May’s Conservative Party are hinting they plan to challenge her leadership.

Brexit-backers are furious about a draft divorce deal with the European Union, which they say will leave Britain bound by EU rules.

Under Conservative rules, a no-confidence vote in the leader is triggered if 15 percent of party lawmakers write letters requesting one. The required number currently stands at 48 lawmakers, and only Graham Brady, the keeper of the letters, knows for sure how many have been submitted.

Kurz, whose country holds the EU’s rotating presidency until the end of the year, told reporters in Vienna Wednesday that “the result is a good one.”

He said he spoke to EU Brexit negotiator Michel Barnier and British officials overnight and wants “to warmly congratulate them on their negotiating success.”

If progress is made among the EU ambassadors and in Britain, a meeting of EU ministers has been penciled in for Monday. Kurz said EU presidents and prime ministers could meet after that.

In Brussels, EU officials were tight-lipped Wednesday, refusing even to confirm whether a technical-level draft agreement has been reached.
___

Irish Prime Minister Leo Varadkar says the European Union has penciled in a Nov. 25 summit to discuss a Brexit deal if the British Cabinet approves the draft document.

Varadkar told Irish lawmakers that “we are close” to “a legally binding and legally operable withdrawal agreement.” But he says nothing is guaranteed, and a lot of things can still go wrong.

Britain’s Cabinet is meeting Wednesday to decide whether to support the draft divorce deal, which includes a proposal to keep the border between Ireland and Northern Ireland free of customs checks after Brexit.

Varadkar says Irish lawmakers will also get a vote on the draft deal. It also needs to be approved by the EU and the British and European Parliaments.
____

The German government is holding back on its assessment of the draft deal on Britain’s exit from the European Union, saying it has yet to be briefed on the details.

A spokeswoman for German Chancellor Angela Merkel told reporters in Berlin on Wednesday that “the government naturally welcomes any progress that leads to Britain’s departure taking place in an orderly manner.”

Martina Fietz, said the EU’s executive, which is negotiating with Britain, will brief the other 27 members of the bloc Wednesday at 3 p.m. (1400 GMT).

She added that Brexit isn’t on the agenda for Merkel’s weekly Cabinet meeting Thursday.

Maria Adebahr, a spokeswoman for Germany’s Foreign Ministry, said that “should there be an agreement, or significant progress be announced, we would very much welcome that.”
___

U.K. Prime Minister Theresa May says a draft divorce agreement with the European Union “takes us significantly closer to delivering what the British people voted for” when they decided to leave the bloc.

May told lawmakers that the deal means Britain will “take back control” of its laws and borders “while protecting jobs, security and the integrity of our United Kingdom.”

May’s Cabinet is due to meet later Wednesday to consider whether to back the deal. Pro-Brexit politicians are already attacking it, saying it will bind Britain to EU rules and regulations long after it leaves the bloc in March.

May said the Cabinet would decide what to do “in the national interest.”
___

British Prime Minister Theresa May is set to face her divided Cabinet in a bid to win support for a draft Brexit deal with the European Union.

Negotiators from the two sides have reached agreement on divorce terms, including a plan to resolve the key issue of the Irish border.

But pro-Brexit lawmakers in May’s divided Conservative Party are angry, saying the agreement will leave Britain tethered to the EU after it departs in March. Failure to secure Cabinet backing will leave May’s leadership in doubt and the Brexit process in chaos.

If Cabinet supports the deal Wednesday, it needs approval from the EU at a summit in the next few weeks. Then May will need to win backing from Parliament, where pro-Brexit and pro-EU legislators alike are threatening to oppose it.