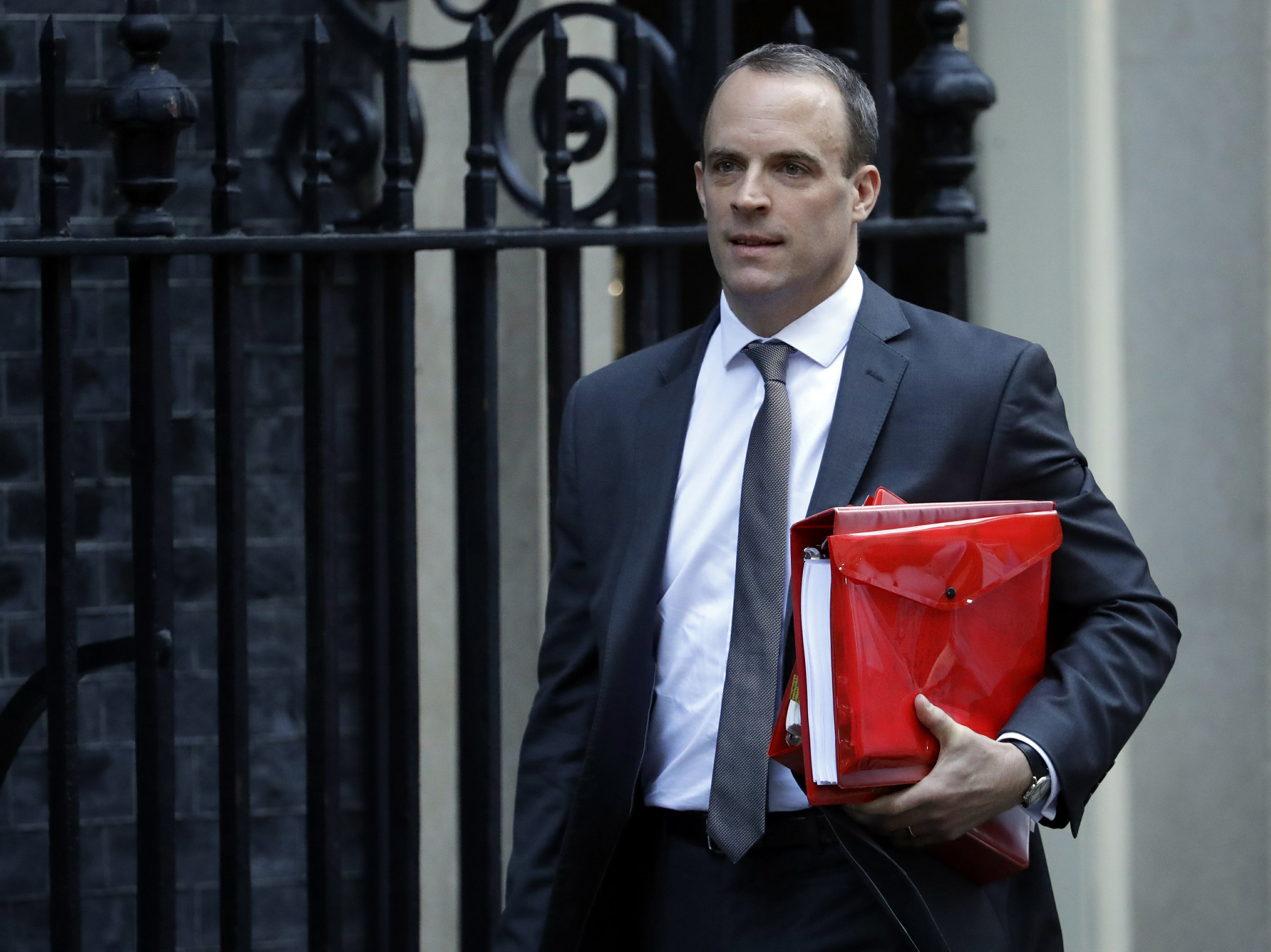 LONDON — The Latest on Britain’s departure from the European Union (all times local):

The pound has fallen sharply after Britain’s Brexit minister resigned from the government, saying he did not agree with the deal the country had struck with the European Union over the terms of its departure next March.

The currency dropped 1 percent, a relatively large decline for an established currency, to $1.2870 within minutes of a tweet by Dominic Raab saying he “cannot in good conscience support the terms proposed for our deal with the EU.”

Prime Minister Theresa May faces a political backlash over the deal, which is considered insufficient by Brexit backers as well as those who wanted to remain in the EU. Parliament needs to approve the deal and it is unclear whether May has the numbers to push it through.

May, who had persuaded a majority of her cabinet to back the deal, is addressing lawmakers Thursday morning.
___

Britain’s Brexit Secretary Dominic Raab has resigned, saying he “cannot in good conscience support the terms proposed for our deal with the EU.”

The resignation is a big blow to Prime Minister Theresa May, who is due to address lawmakers later this morning on the draft Brexit deal.

She is already facing an uphill struggle to convince enough lawmakers in Parliament to accept the agreement with the European Union.

May made some major concessions to the EU to achieve the deal: Britain, for example, will remain tied to the European Union’s customs union during the transition period and potentially for much longer.

Raab said the agreement was unacceptable, and that “no democratic nation has ever signed up to be bound by such an extensive regime.”
___

British lawmakers are struggling to summon much enthusiasm for the proposed Brexit plan that Prime Minister Theresa May has agreed with the European Union, with the opposition Labour Party signaling it will vote against.

The opposition Labour Party’s Brexit spokesman Keir Starmer told the “Good Morning Britain” television program that the deal was a “miserable failure of negotiation,” signaling that May is unlikely to be able to count on the main opposition to make up for those from her own Conservative Party who look set to vote against.

Health Secretary Matt Hancock told the BBC’s Radio 4 that lawmakers should back the draft divorce agreement because the alternatives were “ugly.”

“Ultimately this allows us to take back control,” he said.
___

British Prime Minister Theresa May will start on a campaign to sell a Brexit deal agreed with the European Union to Britain’s divided Parliament.

May, who has persuaded a majority of her cabinet to back the deal, is addressing lawmakers Thursday morning over the terms of the proposed divorce deal. Many in her own party oppose the deal for leaving Britain too closely tied to the European bloc and opposition parties have said they’ll vote against.

Pacifying some in her own party will be a challenge and on Thursday Shailesh Vara quit as Northern Ireland Minister, saying he could not support May’s agreement, which he said “leaves the UK in a halfway house with no time limit on when we will finally be a sovereign nation.”
___

European Union chief Donald Tusk has called for a summit of leaders to take place on Nov. 25 so they can endorse a draft Brexit deal that has been reached with the British government.

Following an early Thursday meeting, Tusk heaped praise on the EU’s Brexit negotiator, Michel Barnier, who had “achieved the two most important objectives” — limiting the damage caused by Britain’s impending departure and maintaining the interests of the other 27 countries that will remain in the bloc after Brexit.

While British Prime Minister Theresa May is trying to win support within her fractured party as well as Parliament, the EU has held the line behind Barnier during the negotiations.