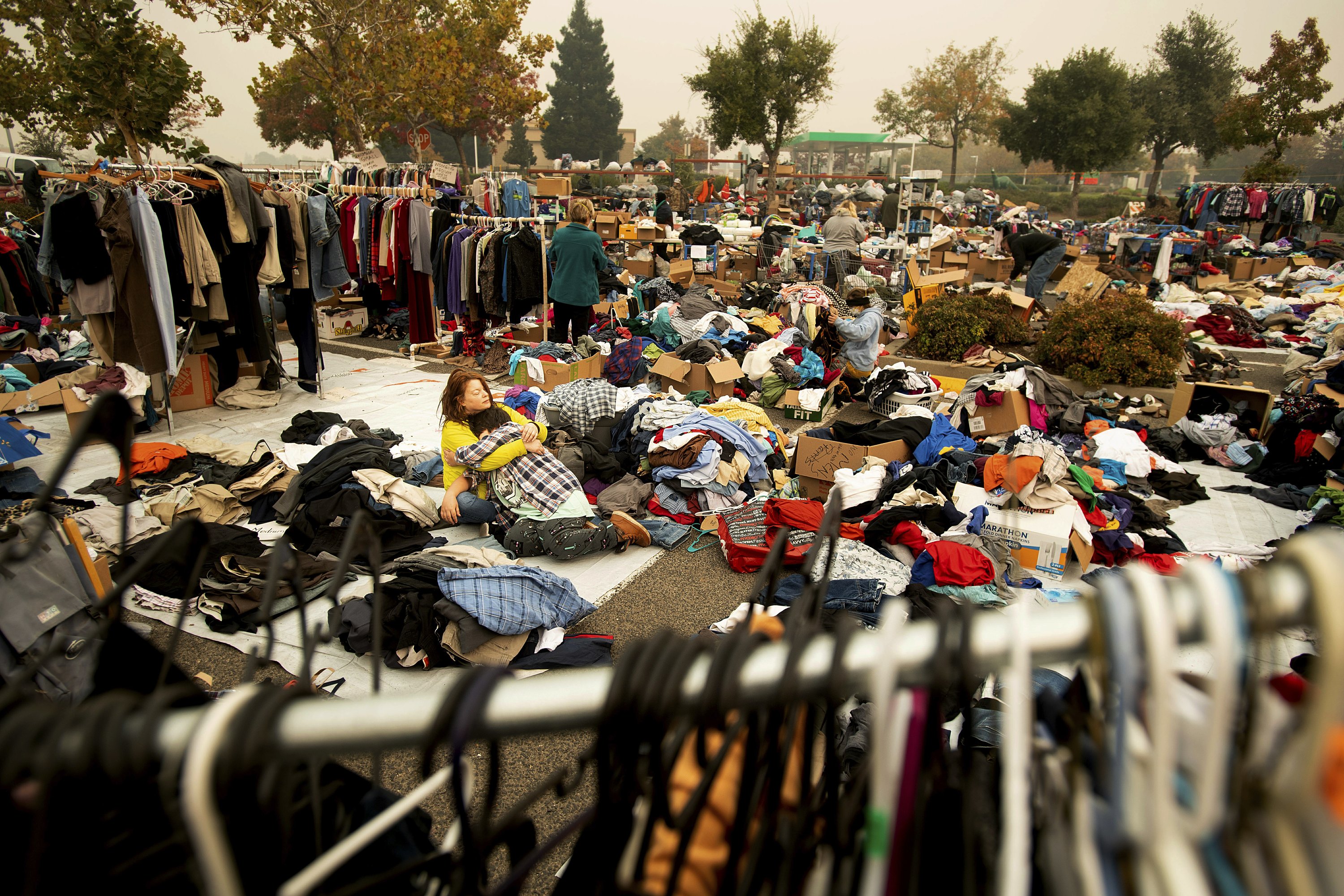 CHICO, Calif. — Fire refugee Anna Goodnight sat on an overturned shopping cart Thursday in a Walmart parking lot as she ate scrambled eggs and tater tots while her husband drank a Budweiser.

The couple was trying to put a good face on a weeklong ordeal that left them uncertain of the fate of their home and now had them camping next to the store with hundreds of others forced to flee from a deadly Northern California wildfire . But William Goodnight finally lost it and began to cry.

“We’re grateful. We’re better off than some. I’ve been holding it together for her,” he said, gesturing toward his wife. “I’m just breaking down finally.”

With the Goodnights’ hometown of Paradise destroyed, thousands of homes gone and untold neighbors dead, uncertainty hangs over survivors like smoke still clouding the sky over Chico. For those who have turned a grassy lot next to the Walmart into an informal campground, the anxiety of what lies ahead is even greater.

They have no roof overhead — just a filament of nylon that provides privacy but little security. It’s chilly at night and they wonder what will happen if it rains and where they’ll go if the camp closes Sunday, as planned.

“It’s cold and scary,” said Lilly Batres, 13, one of the few children here, who fled with her family from Magalia and don’t know if they have a home to return to. “I feel like people are going to come into our tent.”

Word began to spread Thursday that efforts were being made to phase out the camp by gradually removing donated clothing, food and toilets.

“The ultimate goal is to get these people out of tents, out of their cars and into warm shelter, into homes,” said Jessica Busick, who was among the first volunteers when she and her husband started serving free food from their Truckaroni food truck last week. “We’ve always known this isn’t a long-term solution.”

It’s unclear what will be done if people don’t leave Sunday, but city officials don’t plan to kick them out, said Betsy Totten, a Chico spokeswoman. Totten said volunteers — not the city — had decided to shut down the camp.

Walmart has added security to the location and is concerned about safety there, but it is not asking people to leave, spokeswoman LeMia Jenkins said.

Some, like Batres’ family, had arrived after running out of money for a hotel. Others couldn’t find a room or weren’t allowed to stay at shelters with their dogs or, in the case of Suzanne Kaksonen, her two cockatoos.

Kaksonen couldn’t remember how long she had been there, but said it felt like forever.

“I just want to go home,” she said. “I don’t even care if there’s no home. I just want to go back to my dirt, you know, and put a trailer up and clean it up and get going. Sooner the better. I don’t want to wait six months. That petrifies me.”

Volunteers have shown up to help out and donations poured in. The informal nature of the camp was evident in the mix of order and disarray.

Racks of used clothes ranging from sweaters to plaid flannel shirts and tables covered with neatly organized pairs of boots, sneakers and shoes competed for space with shopping carts full of clothes, garbage bags stuffed with other donations, boxes of books, stuffed animals — yellow, purple and green teddy bears and a menagerie of other fuzzy critters — sitting on the pavement.

A sign tacked to a post says: “Short term help for evacuees. Please take what will help you through the next couple days. Be mindful of other evacuees!”

Food trucks offered free meals and a cook flipped burgers on a grill. There were portable toilets and some people were used the Walmart restrooms.

Someone walking through the camp Thursday offered free medicinal marijuana. Laura Whitaker, an evacuee from Paradise, said that while everyone had been helpful, she heard people were pretending to be evacuees and were selling drugs from tents.

More than 75 tents had popped up in the space since Matthew Flanagan arrived Friday and still more were sleeping in cars.

“We call it Wally World,” Flanagan said, a riff off the store name. “When I first got here there was nobody here. And now it’s just getting worse and worse and worse. There are more evacuees, more people running out of money for hotels.”

Information for contacting the Federal Emergency Management Agency for assistance was posted on a board that allowed people to write the names of those they believed were missing. Several of those names, including Flanagan’s, had the word “Here” written next to them.

Melissa Contant, who drove from the San Francisco area to help out, advised people to register with FEMA as soon as possible and not to reveal too much information about whether they own or rent homes or if they have sufficient food and water, because that could delay aid.

“You’re living in a Walmart parking lot — you’re not OK,” she told Maggie and Michael Crowder.

Michael Crowder, a former sheriff’s deputy, had left behind a rental home in Magalia, a Sierra foothills town also ravaged by flames, on his motorcycle with this wife following in a truck with their pit bull, Coco.

They slept several nights in a Burger King parking lot and were running out of money and food when they went to buy a tent at Walmart and discovered the camp.

Tents had sold out, but a pastor and some volunteers showed up with the shelters and blankets and cots. A volunteer pitched a red tent for the Crowders in the dark.

“This is better than Burger King in some ways,” Maggie Crowder said. “We were kind of scared to be part of this.”