Latest: Sheriff: List of missing after fire drops to 1,000 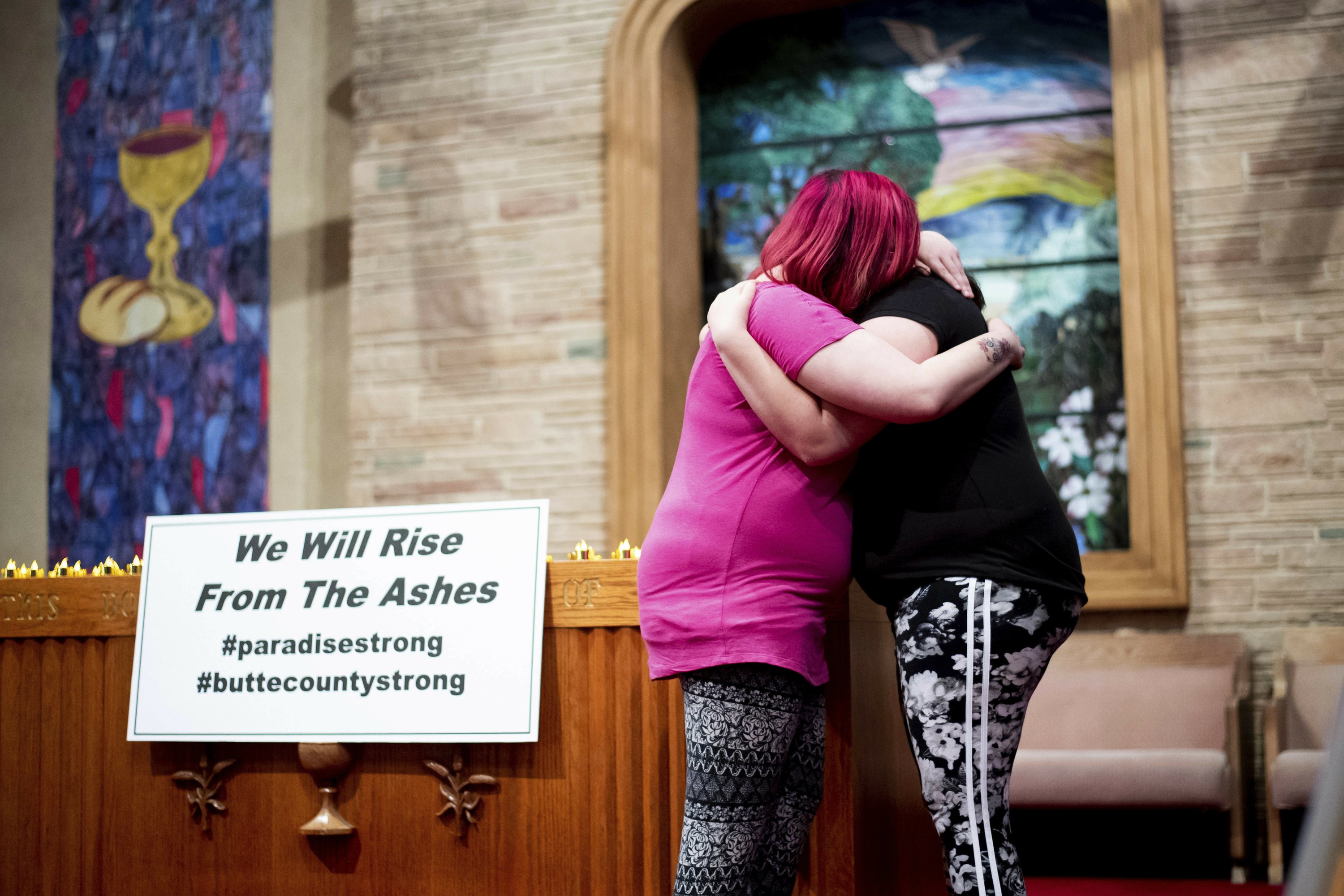 CHICO, Calif. — The Latest on California’s wildfires (all times local):

A Northern California sheriff says the list of names of those unaccounted for after a deadly wildfire has dropped to around 1,000.

Butte County Sheriff Kory Honea says that’s about 300 less than what was posted at the start of Sunday.

Authorities stressed that many of the people on the list may be safe and unaware they have been reported missing.

The so-called Camp Fire swept through the rural town of Paradise on Nov. 8. It has destroyed around 10,500 homes.
___

Authorities say one more set of human remains was found Sunday, bringing the total number killed in a devastating California wildfire to 77.

Over a thousand names remain on a list of those unaccounted for after the so-called Camp Fire swept through the rural town of Paradise on Nov. 8. Authorities stressed that many of those may be safe and unaware they have been reported missing.

Hundreds of volunteers are sifting through ash and debris, searching for human remains before expected rains complicate their efforts. The predicted downpours could wash away telltale fragments of bone, or turn loose, dry ash into a thick paste that would frustrate the search.

President Donald Trump arrives in California to tour the devastation caused from the nation’s deadliest wildfire in a century (Nov. 17)

The fire was 65 percent contained Sunday.
___

Paradise resident Paul Stavish is mourning the loss of his community at a Sunday memorial for the victims of the Northern California wildfire.

The 72-year-old retired computer engineer placed a battery-powered votive candle on an altar, saying he’s thinking about those who died.

At least 76 bodies have been recovered in the fire zone about 170 miles north of San Francisco.

Stavish moved to Paradise 13 years ago and described the community as warm and tight-knit.

He and his wife and three dogs fled the flames when the so-called Camp Fire swept through the area. His house was incinerated.

Stavish says he drove up for the memorial from Sacramento where he’s staying in a hotel.
___

More than 50 people gathered at a memorial for the victims of the Northern California wildfire at a church in Chico.

At least 76 bodies have been recovered in the fire zone about 170 miles north of San Francisco.

At the vigil Sunday, Pastor Jesse Kearns recited a prayer for first responders as people hugged, some with tears in their eyes.

“We ask for continued strength as they are growing weary right now,” he said. A banner on the altar read, “we will rise from the ashes.”

Jacob Kliebe, a pastor at another local church, prayed for comfort and strength for the days ahead.
___

Crews searching for remains of people after the devastating Northern California wildfire are stepping up their efforts ahead of rains forecast for later this week that could complicate their work.

A team of 10 volunteers along with a cadaver dog were examining burned houses Sunday in a Paradise neighborhood looking for victims.

They’re focusing on vehicles, bathtubs and mattress springs that would indicate a charred bed.

If no remains are found, the team leaves a note in orange spray paint near the home.

Rain would help suppress the fire but could also complicate the search and recovery effort. Officials say ash that is now dry and easy to dust off would turn into paste, making it harder to uncover remains.

At least 76 bodies have been recovered in the fire zone.
___

The National Park Service says all but one of 13 mountain lions being tracked in Southern California mountains have been accounted for following a devastating wildfire.

As of Friday, the only missing mountain lion was one dubbed P-74, a young male born last year.

In addition, all four bobcats that the agency monitors via GPS have been located in the Santa Monica Mountains northwest of Los Angeles.

The blaze was 88 percent contained on Sunday and more evacuation orders have been lifted.
___

Officials have again increased the number of homes and other structures burned by a huge Southern California wildfire.

The figure rose Sunday to 1,130 buildings destroyed — many of them homes — and 300 damaged. The tally is continuing.

Firefighters are making progress against the blaze that broke out Nov. 8 and tore through communities west of Los Angeles from Thousand Oaks to Malibu.

More evacuees have been allowed back in their homes and the 151-square-mile (391-square-kilometer) blaze is now 88 percent contained.

Three people died during the Woolsey fire, including two found in a car and one in the rubble of a charred home. Three firefighters have been injured.
___

California’s governor is expressing optimism that President Donald Trump will support the state as it deals with raging wildfires.

Democratic Gov. Jerry Brown said in an interview on CBS’ “Face the Nation” airing Sunday that the Republican president has “got our back” and has pledged to continue to help.

Trump initially blamed state officials for poor forest management in exacerbating the fires and threatened to cut off federal funding. He’s since signed an emergency declaration and toured the devastated areas Saturday with Brown and Gov.-elect Gavin Newsom.

Brown also suggested in the CBS interview that the wildfires will make believers of even the most ardent climate change skeptics “in less than five years” and that those living near forests might need to build underground shelters to protect them from wildfires going forward.
___

Pope Francis has prayed for victims of California’s wildfires and freezing weather on the U.S. East Coast.

Addressing tens of thousands of faithful in St. Peter’s Square at the Vatican on Sunday, including pilgrims from New York and New Jersey, Francis prayed that “the Lord welcome the deceased into his peace, comfort family members and sustain all those involved in rescue efforts.”

Francis said he wanted to offer a “special prayer to all those stricken by the fires that are scourging California, and now also for the victims of the freeze of the east coast of the United States.”

At least 76 people perished, and hundreds are unaccounted for in the California wildfires. In the eastern U.S., an unusually early winter snowstorm last week was blamed for at least seven deaths.
___

Northern California crews battling the country’s deadliest wildfire in a century were bracing for wind gusts of up to 50 miles per hour that could erode gains they have made on a disaster that has killed at least 76 people.

He stressed that the roster includes duplicate names and names of people who haven’t reported that they are OK. He pleaded with fire evacuees to check the list.

The Camp Fire has destroyed nearly 10,000 homes since it sparked Nov. 8 and torched 233 square miles (600 square kilometers). It is 55 percent contained.