10 years on, Mumbai moves on from attacks but scars remain 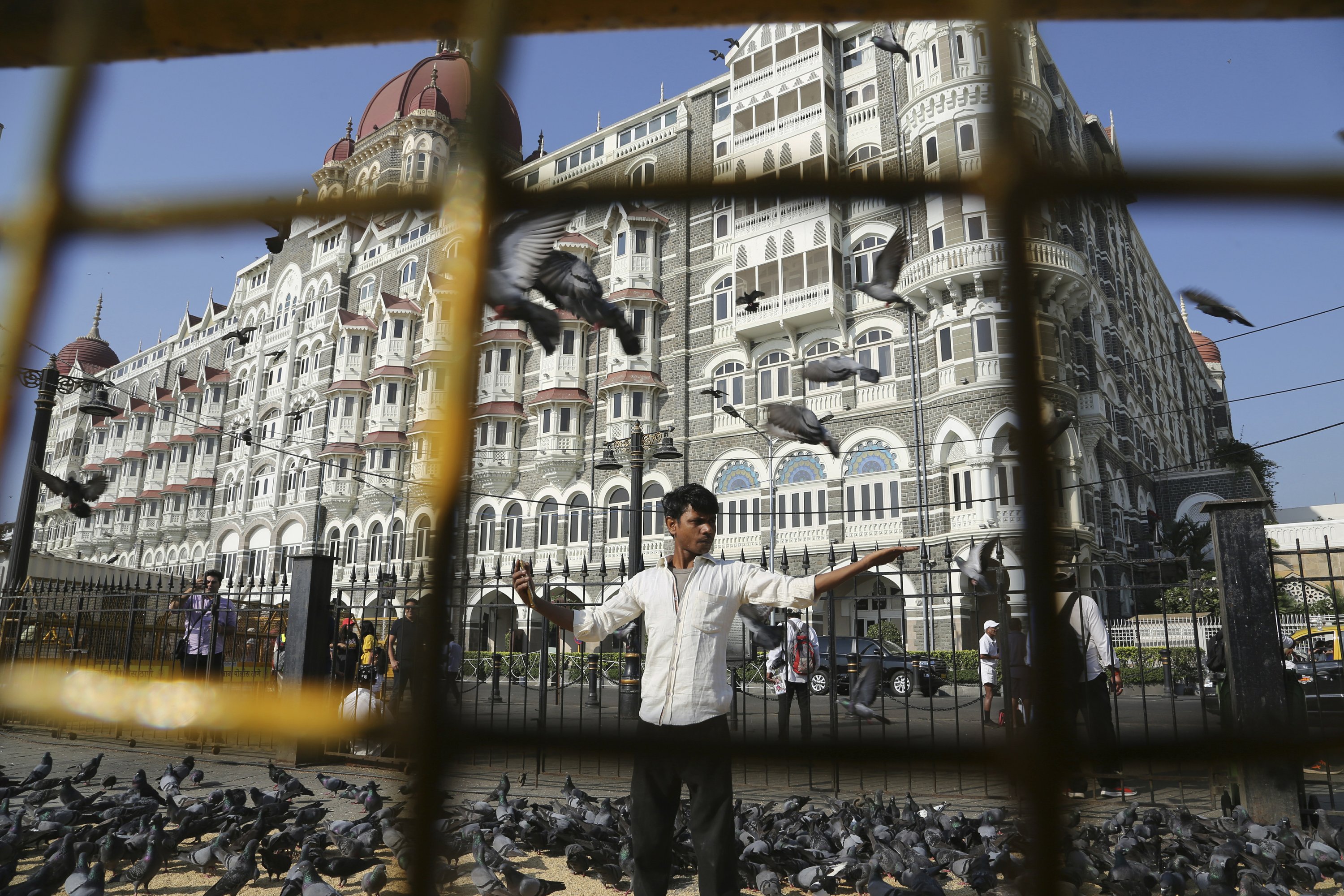 He was in the kitchen of the Taj Mahal Palace hotel’s private club, The Chambers, when four gunmen walked in with assault rifles and sprayed the guests and hotel staff with bullets. He tried to hide, but his efforts were for naught.

“I was found out by the terrorists. They got me out. Me, along with two more guests, we were made to stand in line and we were shot point blank,” he says.

On Nov. 26, 2008, India’s financial capital Mumbai was turned into a war zone by a group of Pakistani gunmen who launched coordinated attacks in the heart of the city. They targeted two luxury hotels, a Jewish center, a tourist restaurant and a crowded train station. Three days of carnage killed 166 people, including foreign tourists, and wounded hundreds more.

The epicenter of the assault was the iconic Taj Mahal Palace hotel with its imposing, red-tiled dome overlooking the Gateway of India monument. Thirty-one people died inside the hotel, including staff trying to guide the guests to safety. Visceral images of smoke leaping out of the city landmark have come to define the 60-hour siege.

Deora was shot in his abdomen and leg. The two guests with him were killed, but he was evacuated by hotel security and rushed to a hospital. It took him more than three months to recover.

Survivors recall their harrowing experiences during the November 26, 2008 attack on the Taj Mahal Palace hotel in Mumbai. Ten years on, there are few signs of the assault in the iconic building. (Nov. 23)

The near-death experience has given the 44-year old chef a new perspective on the fragility of life and an easy sense of humor.

“My entire family is from the army background and nobody’s got shot other than me,” he says with a laugh.

Ten years on, there are few signs of the assault in the 115-year old hotel, which was left ablaze, its opulent interior destroyed.

But the events are not forgotten. A minimally designed memorial for the victims greets visitors in the hotel lobby. A waterfall cascades down behind glass, alongside an installation with names of victims and a tree of life.

“I don’t think 10 years is long enough to forget if one was ever able to forget this dark moment in the history,” says Puneet Chhatwal, managing director and CEO of The Indian Hotels Company, a Tata group subsidiary that owns the hotel. “Taj Mumbai is not just a hotel. It’s a landmark, a monument in itself. It was an attack on Mumbai.”

India blamed the attack on the Pakistani militant group Lashkar-e-Taiba, throwing relations between the nuclear-armed neighbors into a tailspin. Indian officials accused Pakistan’s intelligence agency of working with the militant group to mastermind the attack — an allegation Islamabad denied.

Even as the country grappled with the diplomatic aftermath of the attack, Taj Mahal Palace staff and management channeled their grief into getting the hotel back on its feet as quickly as possible. The ownership group also offered help to hundreds of survivors and victims’ families through the welfare fund set up in December 2008.

Parts of the hotel reopened within a month of the attacks. The heavily damaged palace wing was reopened in less than two years after a renovation that saw a bullet and grenade-scarred spiral staircase and the blood-splattered hallways repaired, and oriental carpets and precious artifacts put back in place.

It is important to keep the memories of the attack alive to “demonstrate to the world that this should not happen again,” Chhatwal says.

Wearing his chef hat and a half-smile, Deora admits that life has changed post 26/11, as the attacks are known in India. He says the terror attacks have made Mumbai more security conscious and aware of its vulnerabilities.

“I will look at the bags lying on a bench twice. Before I would not do that,” he says.

After the attack, the hotel upgraded its security with more private armed guards, sophisticated baggage and X-ray scanners and metal detectors at the entrance.

“Post 26/11, we spent a lot of money with the help of an international organization in improving our security and safety standards,” says Chhatwal.

The man in charge of keeping the majestic building secure is 46-year-old Sunil Gajanan Kudyadi, who has been working at the hotel for 25 years.

As the security manager on duty at the time of the attack, and someone who knew the building layout, he guided elite commandos as they chased the gunmen through intense gunfire and explosions. He also saved many lives, including Deora’s.

Making daily rounds of the very corridors where the gunmen held people hostage and killed them, the shy and soft-spoken Kudyadi says he doesn’t let it cloud his memory.

“Personally it’s something that I’ve come to live with, come to terms with,” he says. “We have got very formidable defenses and deterrence in place but nobody can be really prepared for such things.”

Banquet supervisor Mallika Jagad, who was 24 at the time of the attack, was clearly not prepared for what unfolded outside the first floor private dining room where she was supervising dinner for a group of business executives and their guests.

When bullets started flying around them and the agitated executives wanted to run out, the young staffer took charge, quickly locked the doors and turned off the lights.

“I was terrified. And you could hear grenades being thrown,” she says.

Still, she kept her calm and kept her petrified guests inside until it was safe to escape out of a window. Jagad was hailed as a hero for saving the lives of nearly 60 people under her watch that night.

The trauma has taken its toll though.

Jagad says initially she could not sleep with the lights out. And she cannot stand the sound of firecrackers. Jagad moved on to work with Tata Trusts and will soon be inducted into their disaster response management team.

In November 2012, India hanged the lone surviving gunman from the attacks. India has repeatedly urged Pakistan to pursue the case more actively, demanding action against those it says are responsible.

For most people affected by the events of 26/11, closure and justice is still a long way off.

“You don’t forget what happened,” Jagad says. “But you can’t let that bog you down.”