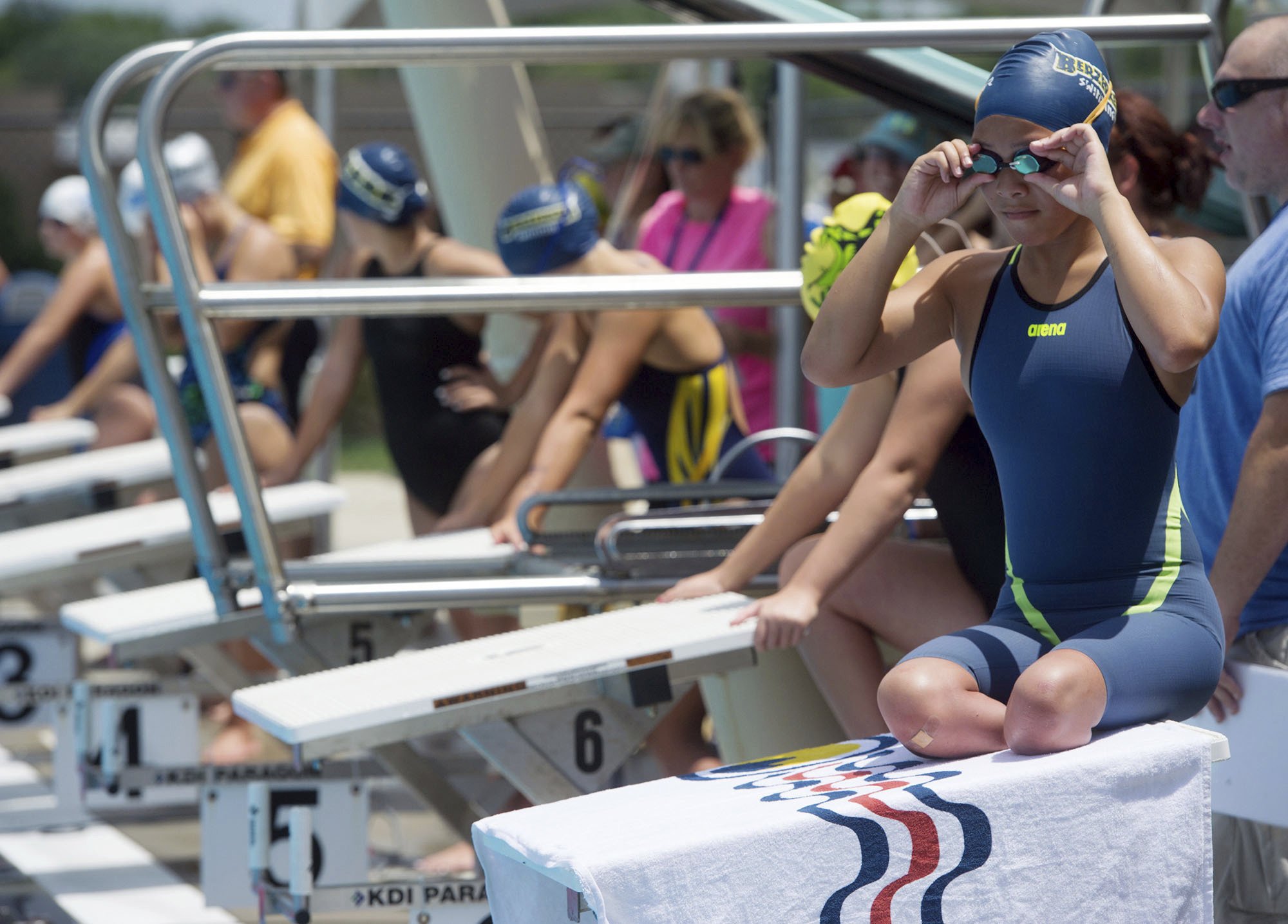 Her dad, destitute, desperate and unable to support a child, brought a pair of bombs to their small hut in Vietnam. He strapped one to himself and the other to Haven’s mom and placed Haven, then 14 months old, in between.

Haven was catapulted out the door. Her legs were mangled beyond repair, but she survived.

Her adopted parents, Rob and Shelly Shepherd, have pictures of Haven sitting on her maternal grandmother’s lap a few days after the explosions, on a metal bed against a wall in a hospital that looks more like an Army barracks. The baby is wearing a gold tank top, holding a twig from a fruit tree. Her legs are meticulously wrapped at the ends of the stumps that remained after doctors removed everything below both knees.

Months later, when the Shepherds brought Haven to a hospital in Kansas City, the surgeons were amazed. Often, children whose legs are amputated at a very young age encounter problems that require revisions through the years — surgeries that can be every bit as daunting and debilitating as the original amputations.

“They said the amputation was, like, perfect,” Shelly Shepherd said.

It’s one of the many reasons Haven, now 15, developed into an elite swimmer and now has her sights set on the Paralympics in 2020.

Maybe it’s adolescent naiveté. Perhaps it’s due to wisdom beyond her years. Most likely it’s a bit of both. But Haven harbors no resentment toward the birth parents who tried to blow her up.

She was too young to remember any of it — not her birth mother who raised her in the early months, not the explosion that propelled her 30 feet out the door, not the grieving grandparents who had her potty trained before she was 2 and took care of her until the Shepherds came.

“This is the dilemma about me,” Haven says. “I don’t feel anything toward them because, in the end, they gave me the best life I could imagine.”

That life begins in a desolate, thatched-roof hut in a remote village in Quang Nam Province in Vietnam.

Her birth family was, by accounts from local newspapers at the time, the poorest in the village.

According to the story told to Rob and Shelly when they arrived to bring Haven back to the United States, her parents weren’t married to each other.

Divorce in Vietnam was taboo, not considered an option. And because Haven’s birth parents were each married to other people and had very little to live on, they felt stuck.

And while the Shepherds reached out to help Haven recover from the unthinkable, the unwanted baby from Vietnam helped heal her adopted family, too.

Two years before Haven was born, Rob and his brother Terry were towing a dunk tank from a company picnic at a rural flour mill in Pierce City, Missouri. As they exited, the truck got tangled on a decorative archway that guided visitors to the party, lurching backward as the tank fell forward.

It landed on Terry’s neck, killing him instantly.

The sudden, unexpected deaths of two of his closest relatives — who were also partners in the family’s longtime hardwood-flooring business — shut off a light within Rob. The couple sometimes doubted it could be rekindled.

“He was suffering in silence,” Shelly Shepherd said. “It’s what made it so cool about seeing him on the trip to Vietnam. I could see him beginning to come back alive.”

Before the trip, the Shepherds had reached another turning point.

Though they had six children, Shelly started following stories about orphans in faraway lands who lived in abject poverty. She began feeling an urge to adopt.

“It became the last thing I would go to bed thinking about, the first thing I thought about when I woke up,” she said. “We had to go through marriage counseling. I was like, ‘I want to let this go, but I can’t.’”

Rob eventually, though reluctantly, came around to the idea of adopting a child. But the trip to Vietnam was not for that.

The Shepherds made the journey to accompany Pam and Randy Cope, who sought permission to find a home for Haven in the United States after the story of the baby girl who survived her parents’ suicide made big news in Vietnam.

The Copes ran a foundation to help care for street kids in the country — established following the death of their own 15-year-old son, Jansen — and used their connections to open a path to place Haven with another family.

It was going to be a difficult trip to one of the remotest corners of the country — a journey filled with red tape, government officials and, of course, the emotional handover of the girl from her still-grieving grandparents, who did not have the resources to care for her. The Copes asked the Shepherds if they wanted to come along.

Rob and Shelly remember the trip vividly — from the long motorcycle ride through the jungle on roads that turned into paths; to the swarms of kids who scurried out of their ramshackle huts when Rob pulled out the bag of lollipops; to the rice that Haven’s grandmother spilled onto the porch then quickly scooped up upon their arrival.

They remember the way Haven pressed herself against Rob, at first, sensing he was the one she’d need to win over right away.

They remember sensing, as they held the young girl and bonded with her, a gratefulness that could only be felt, not spoken.

They remember feeling that something was changing.

“We just kept saying, ‘Her adopted parents should be here,’” Shelly said.

One night in Saigon, as they waited at the hospital for Haven to get the shots and medical papers needed for the trip back to America, Haven wore Shelly’s sunglasses and bounced on her knee.

Shelly swung her up high and Haven let out a huge belly laugh.

Shelly didn’t sleep a wink on the 38-hour journey from Saigon to the airport in Tulsa, where she and Pam Cope handed off Haven to her adopting parents for the ride to her new home in southwest Missouri.

It was devastating for Shelly.

She had fallen in love with this young girl — nurtured her during the precious moments after her grandparents gave her away, been wooed by the infectious smile and the way she’d charmed Rob and brought him back to life.

“The whole experience had that feeling of, ‘What just happened?’” Rob said. “When we got off the motorcycles, and the grandma handed Haven to Shelly, and she was the very first person who touched her, I knew it. I was in trouble.”

Miracle No. 3: A second chance.

Though the placement family had the best of intentions, it was not a perfect fit. The most pressing issue was that they already had their hands full with a 2-year-old girl at home.

Shelly returned back to her busy life and gave up the idea of adoption. Though they had not considered bringing a child into their house with disabilities, the two weeks in Vietnam changed that. In Shelly’s mind, she had found her baby but was forced to hand her off. No other child could replace that.

It was Pam Cope’s duty to make occasional visits to ensure everything was going well at the adopting home. When Shelly asked her friend how things were going, she noticed Cope’s hesitation.

After several more weeks, the call came. It was Shelly’s birthday.

The Shepherds named her Haven — a name Shelly had long liked, and one that took on a whole new meaning after she and Rob received the toddler in their home.

Next summer, Shelly will bring Haven back to Vietnam to meet the grandparents who gave her away 14 years ago.

“She says she doesn’t need that, but I tell her, ‘It’s not about you,’” Shelly says. “It’s about the fact that they gave us our child and, for you, you don’t remember the pain in your grandmother’s face. I hold that as a responsibility.”

“I understand all this,” Haven says. “But really, I’m a country girl. I know where I came from.”

With its population of 14,000, Carthage, Missouri is the kind of small town where everyone knows everyone.

Given the long line of basketball and volleyball players, runners and softball stars who came up in the Shepherd household, it was more or less a given that, legs or no, Haven would be an athlete of some sort.

She picked swimming, a sport her parents might have predicted shortly after they met her and placed her in the swimming pool, where they got the first glimpse of a smile that would change their lives.

It’s a pressure-packed journey that, at times, can feel overwhelming.

Sometimes, Haven worries about letting down a legion of fans that grows as her story becomes better-known and she and her mom broaden their footprint in the motivational speaking circles where they are in growing demand. Their key message: “It’s cool to be different.”

Sometimes, Haven worries about letting down her family, well aware of the reputation for excellence the Shepherds have carved out in Carthage.

Sometimes, Haven worries about being left behind and not being able to have fun with her friends in Tokyo.

And at times, she is brought back to the humbling reality of how fortunate she is — and how swimming is only one part of her story.

These days, when Shelly Shepherd tells that story, it elicits gasps — sometimes an involuntary “Oh my God” — from the people who hear it.

As her mom gets ready to deliver the gut punch — often to strangers who stop to chat with the friendly mom-and-daughter pair at Walmart, on the street, in the airport — Haven, standing to the side, will sometimes stealthily mouth the words: “Wait for it. Wait for it.”

Once the shock subsides, a beaming Haven assures whoever is listening that she’s doing just fine.

“I don’t think I could’ve lived anywhere else or been raised any differently than how I was,” she said. “I’m a small-town girl from Missouri. When it comes to getting adopted, I got the long end of the stick.”