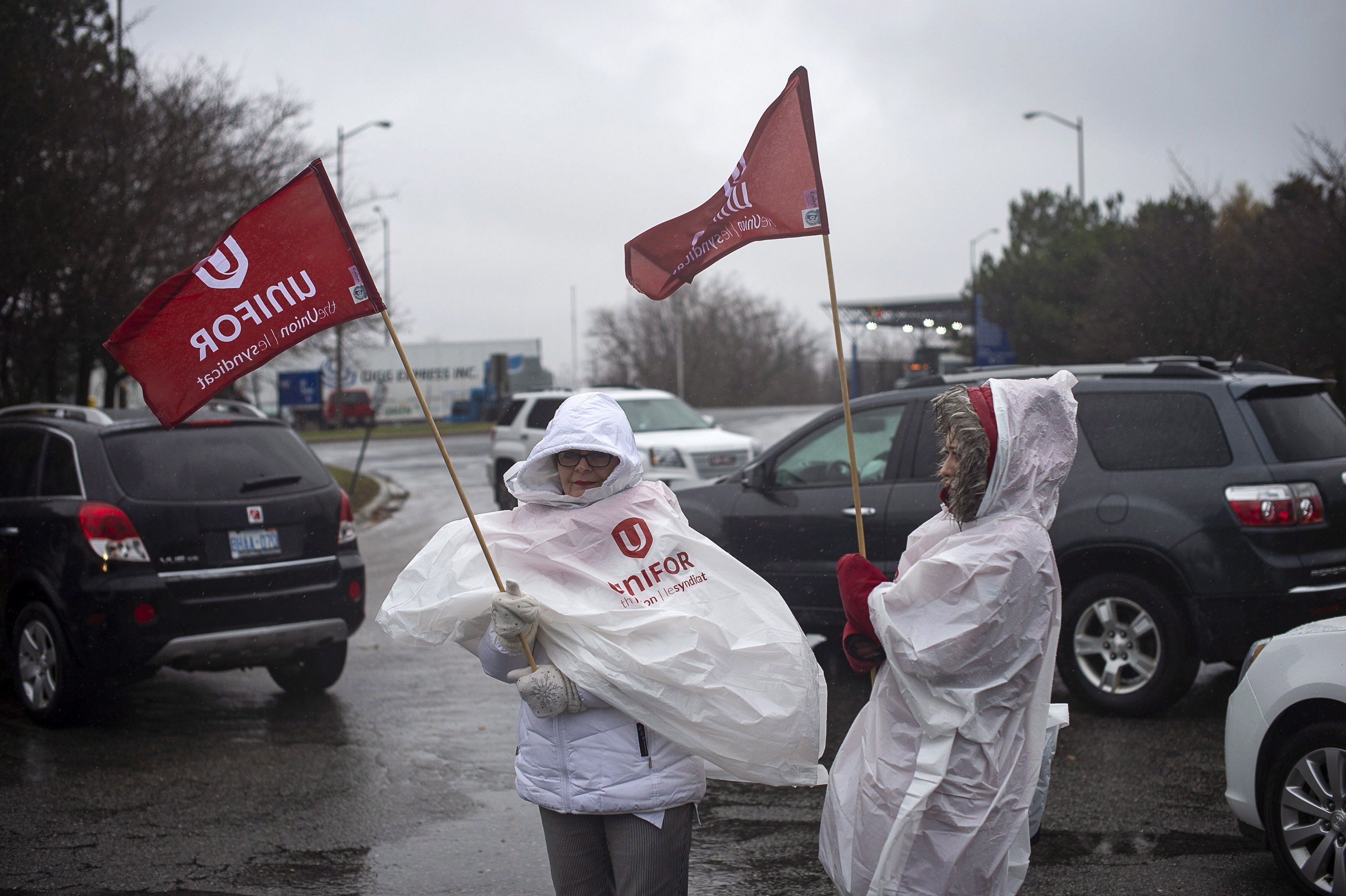 DETROIT — Even though unemployment is low, the economy is growing and U.S. auto sales are near historic highs, General Motors is cutting thousands of jobs in a major restructuring aimed at generating cash to spend on innovation.

It’s the new reality for automakers that are faced with the present cost of designing gas-powered cars and trucks that appeal to buyers now while at the same time preparing for a future world of electric and autonomous vehicles.

GM announced Monday that it will cut as many as 14,000 workers in North America and put five plants up for possible closure as it abandons many of its car models and restructures to focus more on autonomous and electric vehicles.

“The vehicle has become much more software-oriented” with millions of lines of code, she said. “We still need many technical resources in the company.”

The reductions could amount to as much as 8 percent of GM’s global workforce of 180,000 employees.

The restructuring also reflects changing North American auto markets as manufacturers continue to shift away from cars toward SUVs and trucks. In October, almost 65 percent of new vehicles sold in the U.S. were trucks or SUVs. That figure was about 50 percent cars just five years ago.

President Donald Trump says his administration and lawmakers are exerting “a lot of pressure” on General Motors in response to its decision to cut up to 14,000 workers in North America and possibly shutter up to five plants. (Nov. 26)

GM is shedding cars largely because it doesn’t make money on them, Citi analyst Itay Michaeli wrote in a note to investors.

“We estimate sedans operate at a significant loss, hence the need for classic restructuring,” he wrote.

The reduction includes about 8,000 white-collar employees, or 15 percent of GM’s North American white-collar workforce. Some will take buyouts while others will be laid off.

At the factories, around 3,300 blue-collar workers could lose jobs in the U.S. and another 2,600 in Canada, but some U.S. workers could transfer to truck or SUV factories that are increasing production. The cuts mark GM’s first major downsizing since shedding thousands of jobs in the Great Recession.

The company also said it will stop operating two additional factories outside North America by the end of next year.

The move to make GM get leaner before the next downturn likely will be followed by Ford Motor Co., which also has struggled to keep one foot in the present and another in an ambiguous future of new mobility. Ford has been slower to react, but says it will lay off an unspecified number of white-collar workers as it exits much of the car market in favor of trucks and SUVs, some of them powered by batteries.

The GM layoffs come amid the backdrop of a trade wars between the U.S., China and Europe that likely will lead to higher prices for imported vehicles and those exported from the U.S. Barra said the company faces challenges from tariffs but she did not directly link the layoffs to them.

GM doesn’t foresee an economic downturn and is making the cuts “to get in front of it while the company is strong and while the economy is strong,” Barra told reporters.

Factories that could be closed include assembly plants in Detroit and Oshawa, Ontario, and Lordstown, Ohio, as well as transmission plants in Warren, Michigan, and near Baltimore.

The announcement worried GM workers who could lose their jobs.

“I don’t know how I’m going to feed my family,” Matt Smith, a worker at the Ontario factory, said Monday outside the plant’s south gate, where workers blocked trucks from entering or leaving. “It’s hard. It’s horrible.” Smith’s wife also works at the plant. The couple has an 11-month-old at home.

Workers at the Ontario plant walked off the job Monday but were expected to return Tuesday.

After the morning announcement, Barra headed for Washington to speak with White House economic adviser Larry Kudlow in what was described as a previously scheduled meeting.

President Donald Trump, who has made bringing back auto jobs a big part of his appeal to Ohio and other Great Lakes states that are crucial to his re-election, said his administration and lawmakers are exerting “a lot of pressure” on GM.

Trump said he was being tough on Barra, telling the company that the U.S. has done a lot for GM and that if its cars aren’t selling, the company needs to produce ones that will.

At a rally near GM’s Lordstown, Ohio, plant last summer, Trump told people not to sell their homes because the jobs are “all coming back.”

Most of the factories to be affected by GM’s restructuring build cars that will not be sold in the U.S. after next year. They could close or they could get different vehicles to build. Their futures will be part of contract talks with the United Auto Workers union next year.

The Detroit-based union has already condemned GM’s actions and threatened to fight them “through every legal, contractual and collective bargaining avenue open to our membership.”

Bobbi Marsh, who has worked assembling the Chevrolet Cruze compact car at the Ohio plant since 2008, said she can’t understand why the factory might close given the strong economy.

“I can’t believe our president would allow this to happen,” she said Monday. Democratic Sen. Sherrod Brown said the move will be disastrous for the region around Youngstown, Ohio, east of Cleveland, where GM is one of the area’s few remaining industrial anchors.

“GM received record tax breaks as a result of the GOP’s tax bill last year, and has eliminated jobs instead of using that tax windfall to invest in American workers,” he said in a statement.

GM, the nation’s largest automaker, will stop producing cars and transmissions at the plants through 2019. In all, six car models were scrapped, leaving the company with nine remaining car models for its four brands, Buick, Cadillac, Chevrolet and GMC.

Among the cars that won’t be made after next year is the Chevrolet Volt rechargeable gas-electric hybrid. When introduced a decade ago, the Volt was meant to be a bridge to fully electric cars, the company said. It has a small battery that can take it about 50 miles, then it switches to a small gasoline engine.

But since it was introduced, battery technology has improved dramatically, GM said. Now the full-electric Chevrolet Bolt can go up to 238 miles on a single charge.

The United Auto Workers promised to fight any plant closures and criticized GM for cutting U.S. jobs while building full-size pickups in Mexico. It also recently announced that a new Chevrolet Blazer SUV will be built there. Also, GM imports the Buick Envision midsize SUV from China.