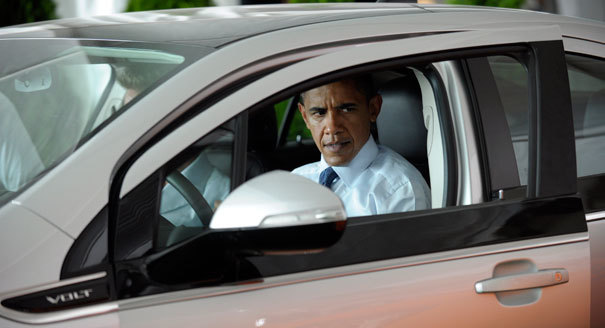 On Monday, Chevrolet announced that it was discontinuing its hybrid electric car, the Volt. The news represents another failure of former President Barack Obama’s green economic agenda.

General Motors, who owns Chevrolet, announced a major restructuring this past month, planning to close plants and lay off thousands of employees. As part of the restructuring, GM will stop manufacturing several types of cars, such as the Volt, the Chevy Impala, the Cadillac XTS and the Buick La Crosse.

The Volt was seen as a symbol of GM’s rise from bankruptcy. President Obama made the rebirth of GM a centerpiece of his re-election campaign in 2012, declaring that thanks to his administration, “GM is alive and Bin Laden is dead.” This slogan did not mention the government’s $50 billion bailout loan of GM — of which the government wrote off $11.2 billion, the stripping of creditor’s rights, the $6 billion Obama administration grant to develop eco-friendly cars, and $2.4 billion grant given directly to automakers who built these cars.

The failure of these economic programs gives economics teachers another example of the broken window fallacy — one has to consider the opportunity cost of a program, not just its results. For example, a program to break windows and repair them does result in more spending, and therefore in more jobs. However, this program would not result in more wealth, nor in a greater standard of living, and therefore would cause more damage to the economy than benefit.

President Obama’s regulations to try to stimulate the “green” car market, especially the Car Allowance Rebate System (popularly known as “cash for clunkers“), can be seen as an example of this fallacy. It may have been more beneficial for the economy if GM had simply chosen to produce cars that consumers demanded, without any subsidies, instead of making cars that the government guided GM to manufacture.

In February 2012, President Obama delighted a crowd of factory workers when he told them that he would buy a Chevy Volt in five years after his presidency ended. As of November 2018, he still has not done so, and it now looks less likely than ever that he will be able to buy one in the future.