Analysis: On this Trump trip, low drama, signs of acceptance 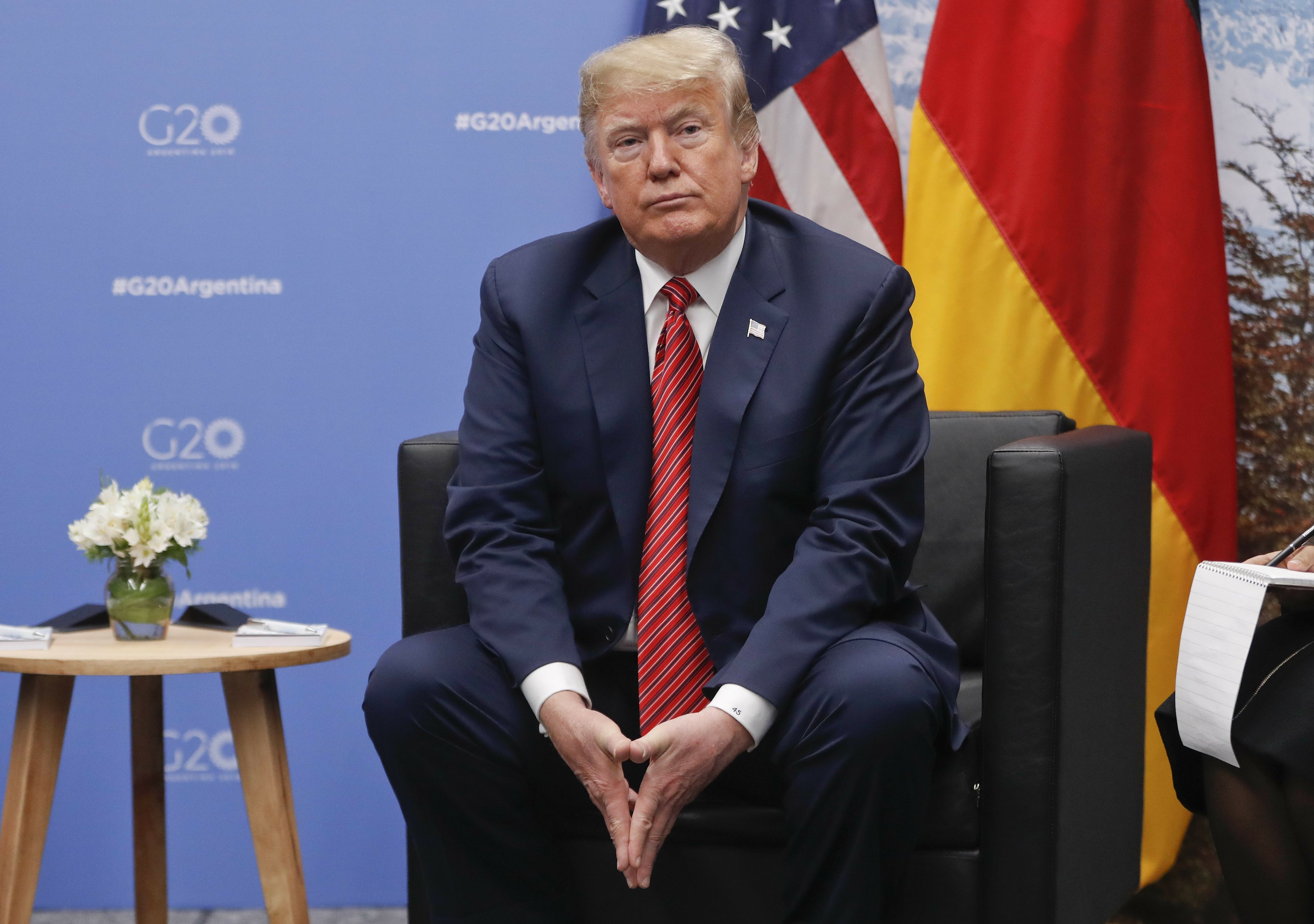 WASHINGTON — If there has been a constant to President Donald Trump’s tumultuous first two years in office, it has been that his foreign trips have tended to be drama-filled affairs — the president barreling through international gatherings like a norm-smashing bull, disrupting alliances and upending long-standing U.S. policies. But at this year’s Group of 20 summit, Trump appeared to settle in among his global peers.

A brisk two days in Argentina saw Trump reach a trade ceasefire with China and sign a three-way trade deal with Mexico and Canada. With little public spectacle, he joined the leaders of the other member nations on the traditional group statement. He buddied up with traditional allies and largely avoided controversial strongmen. Faced with Russia’s spiking aggression in Ukraine, he canceled his sit-down with Vladimir Putin. And when former President George H.W. Bush died, Trump gave respectful remarks and canceled what would likely have been a raucous press conference.

All told, for the often-undisciplined leader, the whirlwind trip was an unusual moment of Zen.

Trump’s election forced the world to reckon with sweeping populist movements and the impact of globalization. In the first two years of his presidency, he has brusquely rejected international engagement for what he views as a single-minded focus on U.S. national interests.

Public and private interactions with world leaders over his 48 hours in Argentina demonstrated Trump does have the capacity for restraint. And other world leaders, for their part, showed grumbling acceptance of Trump’s untraditional stylings.

It’s hardly as though Trump has suddenly abandoned his “America First” world view. But rather than challenge him at every turn, other leaders appear to be adapting to Trump, mindful that multilateral deals are weaker without the United States. Delegation “sherpas” worked through the night to revamp the joint communique so that it would be amenable to Trump, and allies knew to butter Trump up with over-the-top praise.

“From the outset, I would like to congratulate you on your historic victory in the midterm election in the United States,” declared Japanese Prime Minister Shinzo Abe at the start of their meeting Friday. He made no mention of the big electoral gains that Democrats notched in the U.S. House. Abe has long proved to be the world leader most adept at keeping on Trump’s good side, but even more challenging relationships appeared to find firmer ground. Trump’s meeting with German Chancellor Angela Merkel was outwardly all smiles, handshakes and praise.

The G-20 joint statement included U.S.-preferred language on reforming the World Trade Organization — something Trump demanded — and made note that the U.S. opposed the Paris climate agreement, which the president has announced plans to exit.

French President Emmanuel Macron called it a victory that the U.S. signed onto the statement at all, given the tensions going into the talks. He said, “With Trump, we reached an agreement. The U.S. accepted a text.”

But Trump, for his part, played the role of gracious victor, proclaiming that he and Trudeau, along with outgoing Mexican President Enrique Pena Nieto, were battle-tested friends. The new trade accord was a long-sought win for Trump, who as a candidate had promised to reform NAFTA, and he embraced its arrival as vindication of his abrasive negotiating tactics.

Most notably, Trump largely kept his distance from Putin and Saudi Crown Prince Mohammed bin Salman. He made small talk with the two strongmen but toed the line on a Western freeze-out of the pair — the former over Russia’s recent seizure of three Ukrainian naval vessels and their crews, and the latter over the murder two months ago of Saudi journalist Jamal Khashoggi.

In previous global summits, the shock factor invariably came from Trump. There was his speech lecturing NATO allies over defense spending in spring 2017. The surprise tete-a-tete with Putin at a G-20 dinner in Germany that summer. And the G-7 meeting earlier this year in Canada, where Trump agreed to a group statement on trade, only to withdraw from it on Twitter while flying to Asia, insulting Trudeau in the process.

This time, the viral moment of the weekend came when Putin and the crown prince, the two relative outcasts of the summit, exchanged an enthusiastic handshake.

Trump also showed control when word came during the summit of Bush’s death. While Trump has struggled to strike the right tone during moments of national loss, he sought to meet this one with grace. He followed the scripted playbook for the state funeral he wishes for himself when that day comes, swiftly declared a day of national mourning and ordered American flags to be flown at half-staff for 30 days. He lauded Bush as a man of “sound judgment, common sense and unflappable leadership.”

For Trump, the Bush family has been a longtime punching bag. He dubbed Jeb Bush “low energy” when they faced off during the 2016 Republican presidential primary. He has been highly critical of George W. Bush’s presidency. And he mocked George H.W. Bush’s signature phrase about a “thousand points of light” during his campaign rallies just this year.

Those insults were put aside Saturday as Trump spoke to reporters about his respect for the late president.

“We’ll be spending three days of mourning and three days of celebrating a really great man’s life. So we look forward to doing that, and he certainly deserves it. He really does. He was a very special person,” Trump said.

The president’s decision to cancel the planned news conference in the wake of Bush’s death helped keep him on a disciplined track. Those affairs can easily go off the rails, as did Trump’s news conference after a July summit with Putin in Helsinki, where Trump drew widespread criticism for failing to publicly denounce Russia’s interference in the 2016 U.S. election and appearing to accept Putin’s denials of such activity.

The president arrived back in the United States early Sunday, with a week of mourning for Bush ahead, a government funding fight on the horizon and more to come from the Russia investigation. The question now, as always, is just how long can this moment last?