Border village grinds to a halt amid Ukraine-Russia tensions 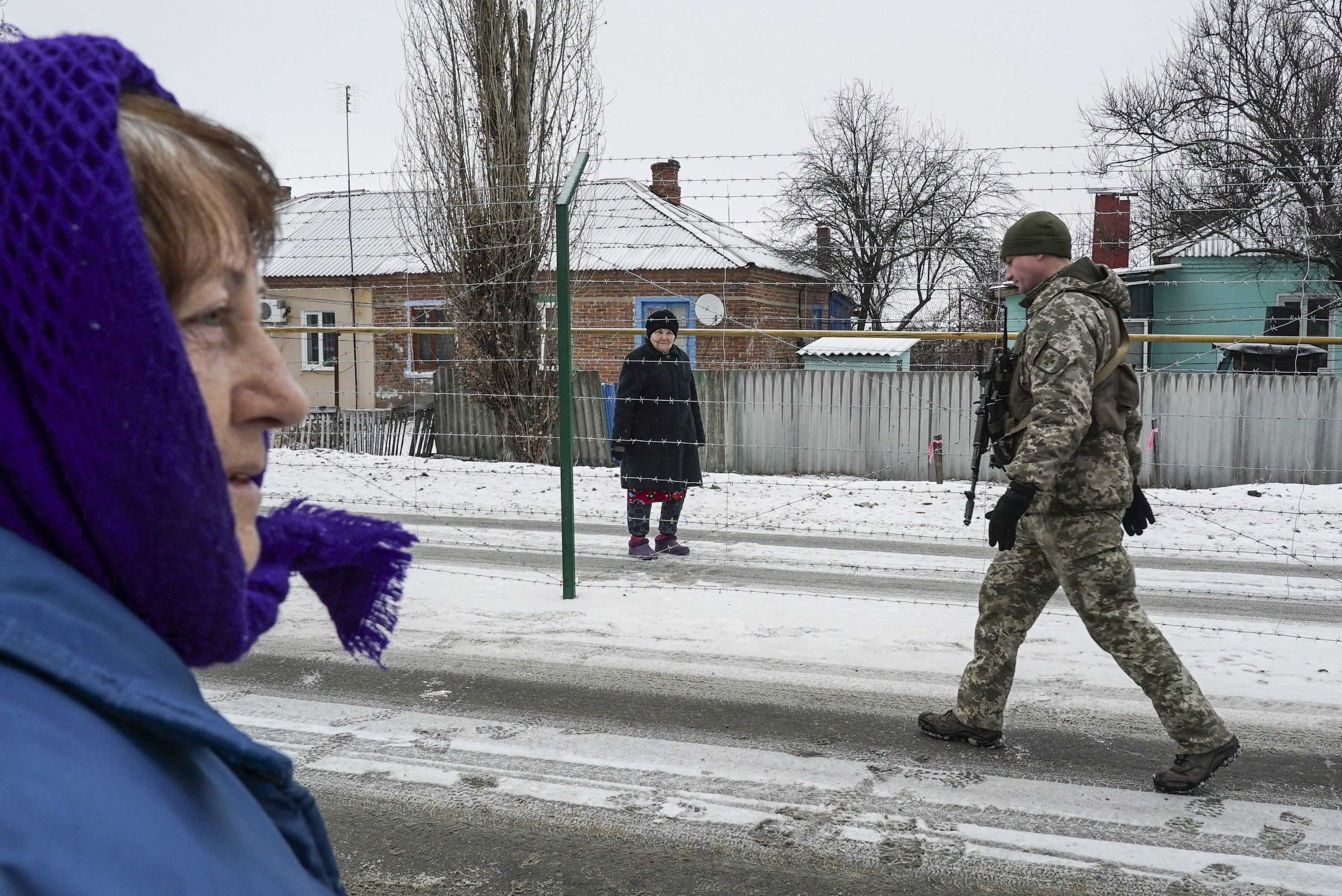 CHERTKOVO, Russia/ MILOVE, Ukraine — Valentina Boldyreva stepped out of her two-story house on an overcast and snowy Sunday afternoon to say hello to her 76-year-old sister who lives on the other side of Friendship of People’s Street, a tall barbed-wire fence separating them.

“You see my sister is walking up to the wire,” Boldyreva said. “How are we going to talk to each other?”

“I’m not allowed to come close,” her sister, Raisa Yakovleva, said as she stood just 100 meters away on the other side of the fence.

“Our windows are facing the barbed wire day and night as if looking out at a prison,” Boldyreva said.

But it’s not a prison camp. It’s a border fence built by Russia earlier this year, marking what was once an invisible border in a symbolic shutdown of nearly all ties between the two neighboring nations.

On a map, Milove, where Boldyreva lives, and Chertkovo, where her sister resides, are one village, crossed by the once aptly named main road, Friendship of Peoples Street. It’s a slogan that still rings true for many residents but it is being sorely tested by the animosity between their two nations, Russia and Ukraine.

Like Boldyreva and Yakoleva, almost every resident of Chertkovo and Milove has close relatives on the other side.

People speak both Russian and Ukrainian without turning the choice of language into a political statement as many have elsewhere, one of many thorny issues fueling the conflict between Ukraine and Russia since Moscow annexed the Crimea Peninsula in March 2014.

In the past, residents would routinely cross the street — back and forth between countries — as border guards looked the other way. These days, Russian border guards on one side and Ukrainian ones on the other patrol in twos or threes along the nearly deserted street, which now resembles a frontline zone.

On Friday, Ukrainian President Petro Poroshenko announced that all Russian men aged 16 to 60 were barred from entering the country. It was the latest sign of the steadily deteriorating relations between the two uneasy neighbors after the Russian coast guard fired upon and seized three Ukrainian naval vessels in the Black Sea last weekend.

In fact, restrictions on Russians entering Ukraine had already effectively existed in Chertkovo for years. In 2015, Ukraine adopted a decree requiring Russians who want to cross the border to use foreign travel passports, as opposed to internal passports. Few Russians living in rural areas like Chertkovo have such documents.

Four and a half years after fighting broke out between Russian-backed separatists and Ukrainian troops in eastern Ukraine, only elderly women like 73-year-old Lidia Radchenko — smiling in a bulky fur coat — brave the crossing. She has three sons living in Ukraine, while another son and a daughter reside in Russia.

“We used to have such great parties. We would gather in the middle of the road,” Rachenko said wistfully. “That fence is like a concentration camp.”

Even passing a jar of pickles to relatives across the barbed wire fence separating the two sides is a punishable offense.

Most of the Russians who spoke to The Associated Press said they stopped crossing into Ukraine soon after the 2014 war broke out as reports spread of their countrymen running into trouble on the other side of the border.

Sitting in his hardware store in Chertkovo, 59-year-old Alexander Petukhov said he was spooked by the reports of people who were either turned back or deported after crossing. He has since cut his business ties with his main supplier in Kharkiv, a Ukrainian city in the east.

“We were used to living as free people,” he said. “It all stopped when the fighting began.”

The main border crossing for vehicles, where the line of cars would stretch for a mile before the war, was nearly deserted on Sunday, with seven cars, all with Ukrainian license plates, waiting to cross.

On Saturday, the Ukrainian side of Friendship of Peoples Street was filled with vendors selling everything from eggs to fur coats, their wares lid out on plastic folding tables. Once a bustling meeting place for residents of both sides, the market now only serves Ukrainian shoppers because Russians are either banned or reluctant to come.

Many wistfully recalled a time when people from both sides mixed freely.

“Chertkovo and Milove — I only found out in the seventh grade, at a geography lesson, that these were the Russia and the Ukrainian Soviet republics,” said Serhiy Harbuz, shopping for milk and chicken in the market.

As he spoke, a Russian border guard could be seen patrolling along the barbed-wire fence less than 100 meters (yards) away.

The once-bustling crossing between Milove and Chertkovo was nearly empty, with just a few people walking from Ukraine into Russia, among them 54-year-old Olga Yevgenyevna and her husband.

“I’m originally from Chertkovo, and my mom lives here,” she said, speaking in Ukrainian. When she married a man from a village on the Ukrainian side of the border, moving there in the late 1980s did not seem like a dramatic decision. Now her elderly mother and brother live in Russia and can’t visit her.

Before the war, she said, “people were crossing everywhere. …. You go back and forth 15 times, no one would care. We had a market and shops. All of it was for everyone.”

“I tell my mom: when I die, no one will come to bury me because Russians are not allowed,” she said.