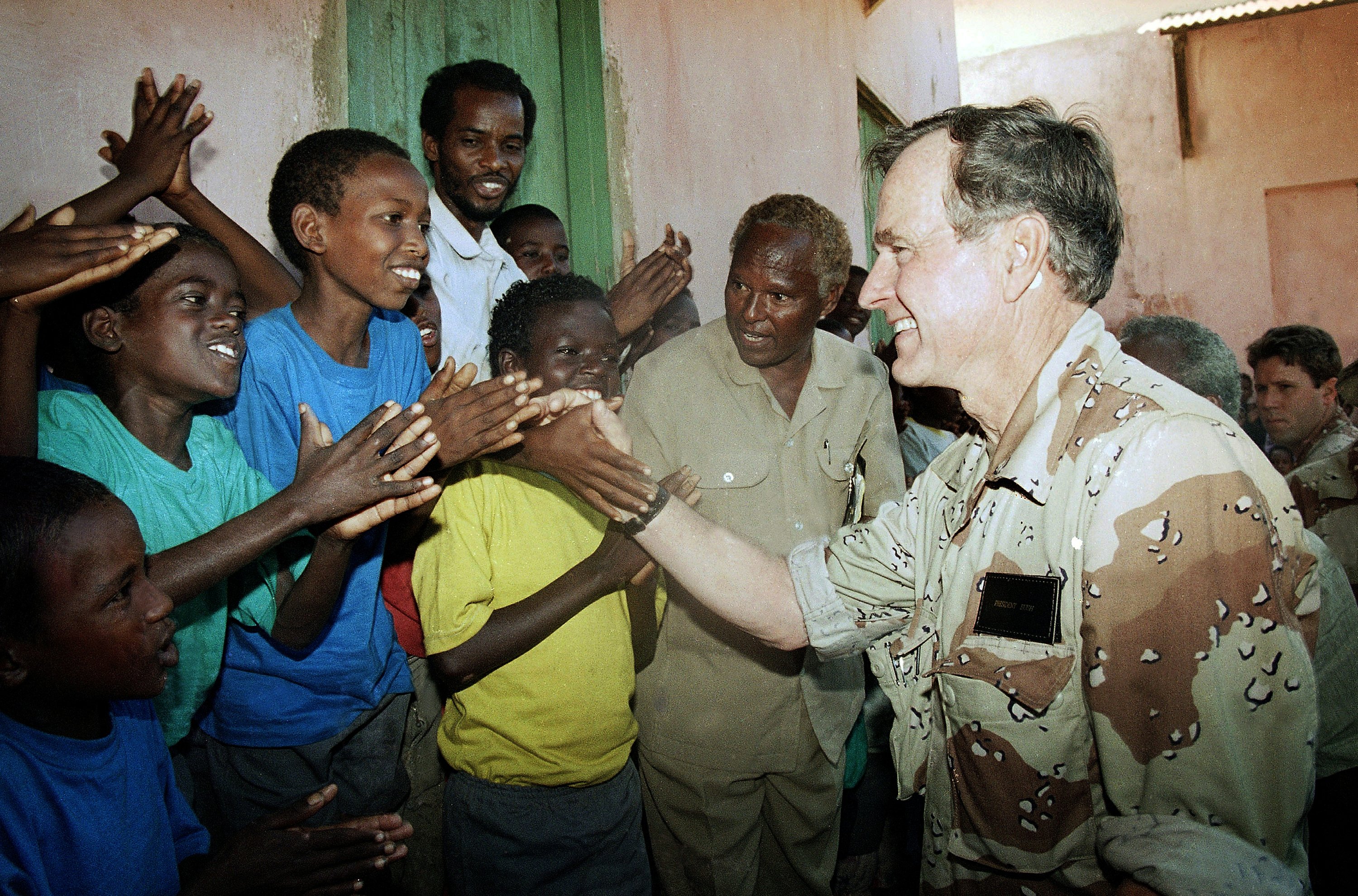 DALLAS — Former President George H.W. Bush teamed up with the man who ousted him from the White House to help victims of natural disasters. He created a program that has honored thousands of American volunteers. He also sent U.S. troops to Africa to help starving Somalis.

It was all part of Bush’s vision for creating what he called a “kinder, gentler nation.” Here’s a look at some of the better known volunteer and humanitarian work credited to Bush, who died late Friday at age 94:

Bush evoked the vision of a “thousand points of light” during his 1989 inaugural address, inviting the nation to take action through public service, and established the Daily Point of Light Award the next year. He formally recognized more than 1,000 volunteers during his administration, from Jesse Sanchez Berain, an Idaho man who helped migrant workers and their children, to Doris Tate, who advocated for victims’ rights after her daughter, actress Sharon Tate, was killed.

During a White House ceremony Bush attended in 2013 to bestow the 5,000th award, then-President Barack Obama credited Bush with expanding a commitment to service in America. “Your love of service has kindled a similar love in the hearts of millions here at home and around the world,” Obama said. “And, frankly, just the fact that you’re such a gentleman and such a good and kind person I think helps to reinforce that spirit of service.”

Houston residents who knew former President George H.W. Bush are remembering him for his down-to-earth nature, and his legacy as not only a President, but a valued member of the Texas community. (Dec. 2)

As he accepted his party’s nomination for president in 1988, Bush said he was guided by certain traditions: “One is that there is a God and He is good, and His love, while free, has a self-imposed cost: We must be good to one another.”

After leaving office, Bush teamed up with former President Bill Clinton, who defeated Bush for his second term in the White House, to raise money for victims of the 2004 Indian Ocean tsunami. They also worked together on fundraising after Hurricane Katrina in 2005 and Hurricane Ike in 2008. And in 2017, Bush and four other living former presidents appeared together at a concert to raise money following hurricanes in Texas, Florida, Louisiana, Puerto Rico and U.S. Virgin Islands.

Bush and his wife Barbara, who died in April, devoted much of their work to promoting cancer research — their daughter Robin died at age 3 of leukemia — and they were life members of the MD Anderson Cancer Center Board of Visitors. A family spokesman said the couple made “substantial” personal gifts to a dozen organizations including medical centers, but that they didn’t want to publicly reveal the amounts.

HELPING THOSE WITH DISABILITIES

Bush signed the landmark Americans with Disabilities Act, which bans workplace discrimination of people with disabilities and requires improved access to public places and transportation. The law was a special point of pride for Bush, said Mark Updegrove, who wrote several books on the American presidency.

“He was very proud of the fact that it liberated so many people who we didn’t give much thought to — not knowing the obstacles they faced on a daily basis,” said Updegrove, president of the Lyndon B. Johnson Foundation.

The Berlin Wall came down as Bush’s first year in office came to a close, followed two years later by the Soviet Union’s collapse. Bush’s steady diplomatic hand helped ensure a peaceful end to the Cold War and he avoided any great “rhetorical flourish” about the U.S. prevailing because he didn’t want to compromise the leadership of then-Soviet President Mikhail Gorbachev and others, Updegrove said.

When Iraq invaded Kuwait in 1990, Bush started building an international military coalition that included other Arab states. And in his final weeks as president, he sent U.S. troops to Somalia to help pacify warring clans and protect overland shipments of food to starving Somalis, saying: “These are humanitarian concerns, and in my view it is proper that the president show this concern to the people over there.”
___

Bush was a teenager when he began his public service career. The son of a U.S. senator, Bush was one of the Navy’s youngest pilots during World War II. He flew 58 missions off the USS San Jacinto and was shot down over the Pacific. He received the Distinguished Flying Cross for bravery.

He was elected to Congress in 1966, and served two terms as a Texas congressman. He later served as ambassador to the United Nations and later to China. He was chairman of the Republican National Committee through the worst of the Watergate scandal, and he served as CIA director and vice president before being elected president.

Calling the 41st president’s life “a testament that public service is a noble calling,” Obama in 2011 awarded Bush the Presidential Medal of Freedom, the nation’s highest civilian honor for contributions to society.