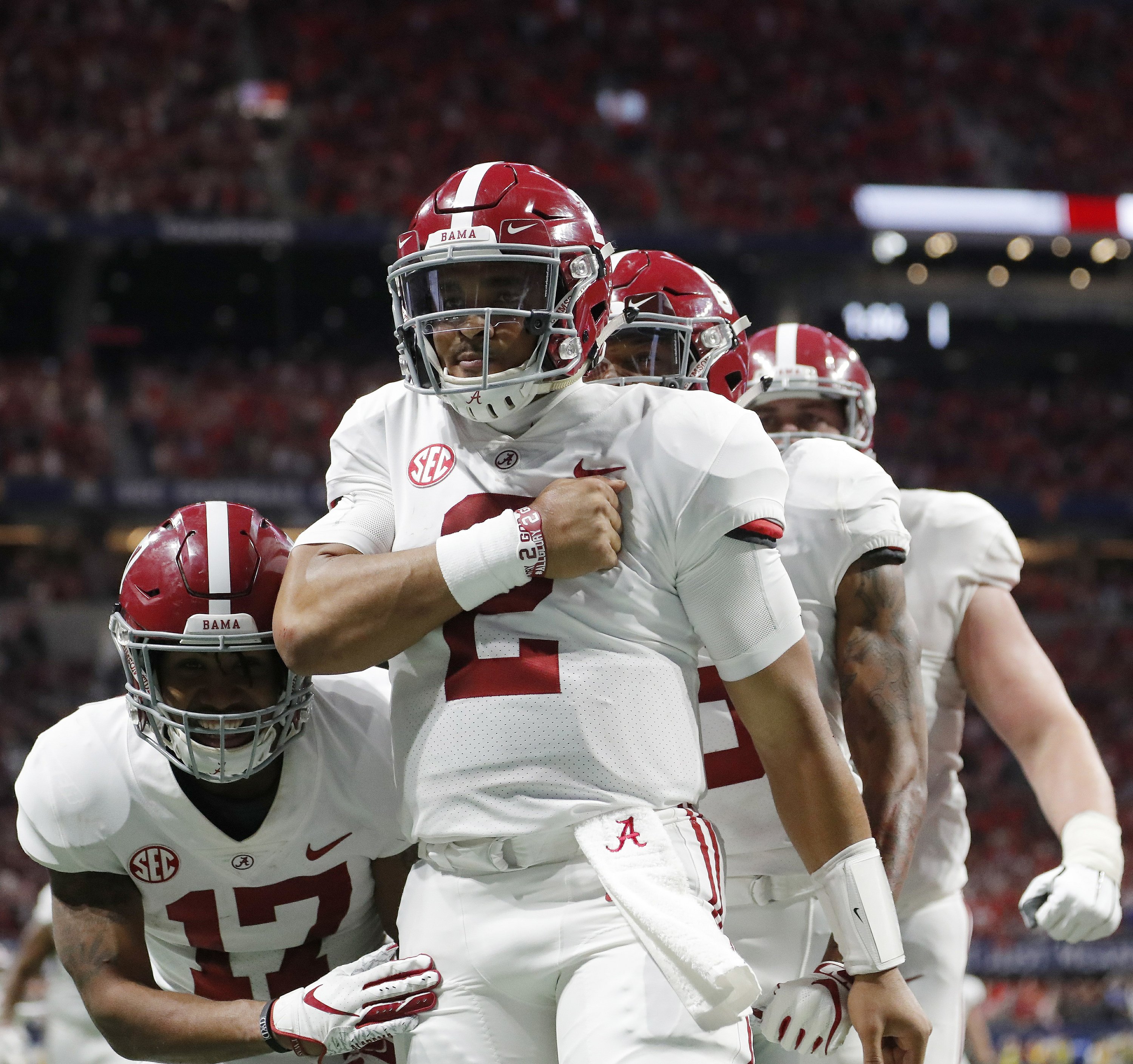 ATLANTA — Jalen Hurts spent most of the season watching from the sideline, cheering on the guy who took his job and hoping for one more chance to lead the Alabama Crimson Tide.

On Saturday, Hurts got the call.

Boy, did he respond.

Hurts threw for one touchdown and ran for another with just over a minute to go, rallying No. 1 Alabama to a 35-28 victory over No. 4 Georgia in the Southeastern Conference championship game. It was a stunning twist on the scenario that played out less than 11 months earlier on the very same field.

If they had pitched this script to Hollywood, it would’ve been laughed out of the room for being too implausible. In last season’s national title game at Mercedes-Benz Stadium, between these same two teams, Tua Tagovailoa replaced an ineffective Hurts at the start of the second half with Alabama trailing Georgia 13-0. The replacement threw three touchdown passes, including a 41-yarder in overtime that gave the Tide a stunning 26-23 victory.

Tagovailoa won the starting job outright heading into this season and performed brilliantly before Saturday, throwing 36 touchdown passes with only two interceptions.

The SEC title game took a different path. Georgia put quite a beating on Tagovailoa, who was picked off twice, spent much of his spare time in the medical tent and was largely ineffective as the Bulldogs built a pair of two-touchdown leads.

Finally, with just over 11 minutes remaining, Tagovailoa went down for good after one of his own linemen stepped on his right foot as he attempted to throw.

Enter Hurts, who posted a 26-2 record as the starter before Tagovailoa claimed the job.

After Georgia (11-2, No. 4 CFP) was stuffed on a fake punt near midfield , Hurts took matters into his own hands for the winning score. Spotting an opening up the middle, he took off on a 15-yard TD run with 1:04 remaining .

“It’s unprecedented to have a guy that won as many games as he won … start as a freshman, only lose a couple of games the whole time that he was the starter, and then all of a sudden he’s not the quarterback,” Saban said. “How do you manage that? How do you handle that? You’ve got to have a tremendous amount of class and character to put team first, knowing your situation is not what it used to be.”

Hurts completed 7 of 9 passes for 82 yards, to go along with five carries for 28 yards in less than a quarter of action.

“It kind of feels like I’m breaking my silence,” Hurts said.

He spoke loud and clear against the Bulldogs. And when he trotted off the field after the winning TD, Tagovailoa was one of the first teammates to greet him. Afterward, they stood side-by-side on the podium in the middle of the field while Alabama received its SEC championship trophy.

“When he went into the game,” linebacker Mack Wilson said, “I was telling Dylan Moses, ‘Man, it’s like deja vu.’ I was like, ‘Watch him go in and bring us back and win the game.’ I knew he was going to do that and I’m pretty sure everybody else did, too.”

The Crimson Tide is headed back to the College Football Playoff, looking for its second straight national title and the sixth of the last decade under Saban.

“I know at Alabama, there’s always an opportunity to win,” Hurts said. “I’m so happy, so happy for everybody.”

Georgia can make a pretty good case for the playoff, too, but the Bulldogs will likely get left out. Big 12 champion Oklahoma avenged its only loss by beating Texas, and No. 6 Ohio State still had a chance to make its case in the Big Ten title game.

This was another galling loss for Saban’s former assistant, Kirby Smart. He’s quickly built Georgia into a national powerhouse, but he keeps coming up short against his ex-boss.

For the second time in less than a year, the Bulldogs squandered a double-digit lead to the Crimson Tide. While this one didn’t end with the suddenness of that national title game, it hurt just as bad. The Bulldogs had another chance to knock off the team that had been No. 1 in the polls all season, a team that has built perhaps the greatest rivalry in college football history.

“With a team like that, you’ve got to be able to put them way because they keep hanging on,” Georgia tight end Isaac Nauta said. “They’ve been doing it for a lot of years.”

Jake Fromm got the best of his duel with Tagovailoa.

Georgia’s sophomore quarterback threw for 301 yards and three touchdowns, while Tagovailoa was only 10 of 25 for 164 yards.

The Alabama QB did spark the comeback with a 51-yard touchdown pass to Jaylen Waddle late in the third quarter, cutting Georgia’s lead to 28-21.

With the game tied at 28, Georgia raced fourth-and-11 at its own 50. The Bulldogs lined up for a punt that could’ve put the Tide in a deep hole, but Smart inexplicably called for a fake punt.

It never had a chance.

Backup quarterback Justin Fields took a direct snap, looked to throw and then took off running. He was quickly swarmed by the Tide defenders, gaining only 2 yards.

Hurts took it from there.

Alabama: This was the sort of challenge that should serve the Crimson Tide well in the College Football Playoff. The Crimson Tide had not been in serious trouble all season, beating everyone by at least 22 points, but they showed plenty of grit when finally challenged by the Bulldogs.

Georgia: The Bulldogs will be kicking themselves for the way they let this one slip away. Twice, on third-and-short with a chance to extend drives, they failed to convert. And that fake punt will go down as one of Smart’s worst blunders.

Alabama: The Crimson Tide heads to the College Football Playoff for the fifth year in a row, undoubtedly as the No. 1 seed and the favorite to win another national title. Alabama is expected to play in the Cotton Bowl semifinals. The opponent could be Oklahoma, Ohio State or maybe even Georgia. Saban endorsed the Bulldogs for a spot in the playoff, saying “they’re one of the four best teams in the country.”

Georgia: The Bulldogs are hoping to land a playoff spot but will likely have to settle for a trip to the Sugar Bowl as a consolation prize.