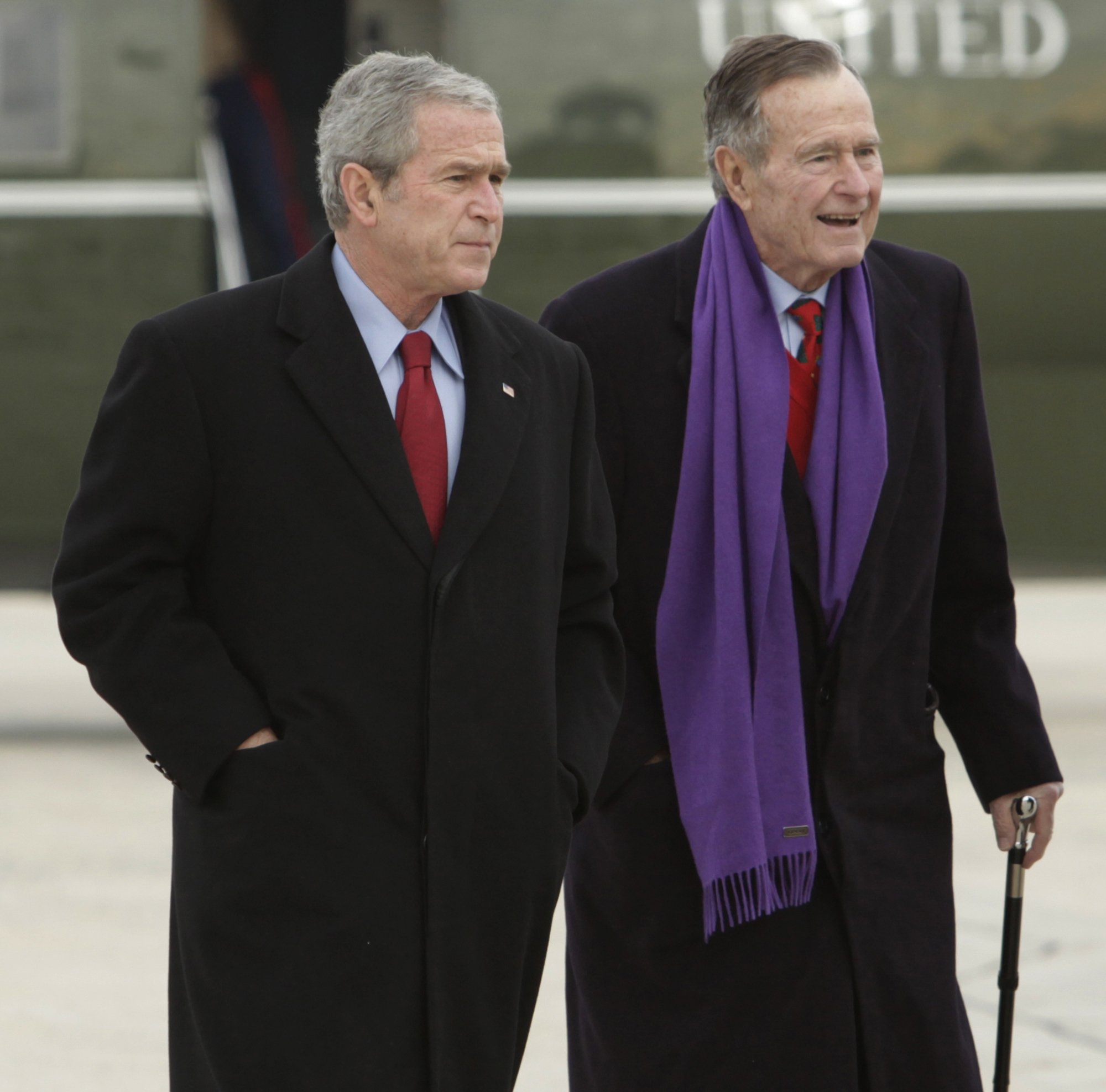 WASHINGTON — George Herbert Walker Bush and George W. Bush had only so much in common as presidents. They shared one big thing besides name, family and party, though. They were both conservatives for their time.

Bush the father was a Republican who could carve a moderate path here and there without a crushing response from the right — think immigration liberalization, for example. “I’m a conservative,” he once said. “But I’m not a nut about it.”

His was an era of stepping back from the prospect of doomsday, with the collapse of the Soviet Union, and a far more limited threat emerging with Iraq’s invasion of Kuwait — soon reversed. Not at all like the searing crucible of 9/11 that came early to his son.

The elder Bush died Friday at age 94. A look at the father and son presidencies through the prism of policy, crisis and family:
___

“Read my lips,” the elder Bush notoriously said, promising no new taxes. That turned out to be mere lip service to the right when he broke that pledge and paid a political price.

Bush the father — the former ambassador, vice president and patrician Republican — may have been largely in step with the tempered conservatism of his era in other respects, but that tax increase was a stretch even then. A striking compromise with Democrats, it’s an approach out of step with today’s GOP, where holding hard and tight to conservative ideology has been valued above all else.

He also signed the Americans with Disabilities Act, an expansion of civil rights and the government’s power in the private and public workplace. In doing so, he sided with liberal Democrats as well as centrist Republicans, resisted stiff pressure from business and declared: “Let the shameful wall of exclusion finally come tumbling down.”

Bush the son had his own way, more to the right than his father if more to the center than where the Republican mainstream went afterward — with all those tea parties and with so many of those old-time GOP centrists gone from Congress.

On the domestic front, the son’s was a time of sweeping tax cuts and just a taste, really, of what he meant by compassionate conservatism.

The country saw a big federal effort to improve education — the No Child Left Behind law that rose with bipartisan support and fell out of favor with both parties in later years. He pushed and won a prescription-drug expansion of Medicare. But it was the package of Bush tax cuts, deep and across the board, that defined his agenda at home and shaped the direction of government well beyond his two terms in office.
___

No one will ever know what the full measure of the younger Bush’s presidency would have been absent the terrorist attacks of 2001, because they overshadowed everything.

But it would not have been just another Bush in charge.

Steeped in Washington’s institutions and shaped by his own new-world-order thinking, the father put together a Gulf War with international support, a plain-as-day provocation and distinct aims.

All to the point where he flabbergasted hawks by letting Iraq and its shattered army, once driven from Kuwait, go on with Saddam Hussein in control.

Contrast that with the son’s Iraq invasion — a war of choice, framed by a world view of good versus evil with nothing in between. And, this time, all the way to Baghdad.

The father’s Gulf War lasted six weeks, after four-plus months of diplomacy and preparation. The son’s wars in Afghanistan and Iraq outlasted his presidency and became President Barack Obama’s to manage. President Donald Trump still has thousands of troops in both countries.
___

“During my presidency, Dad and I didn’t talk much about policy,” George W. Bush writes in “41: A Portrait of My Father,” about the 41st president.

He liked to joke that when he entered presidential politics, he got half his father’s friends and all of his enemies. The most influential friend by far was Dick Cheney, the elder Bush’s defense secretary who became the younger Bush’s vice president and a prime force in driving government to the right.

The 43rd president said he consulted with his dad about his team of advisers, getting his father’s hearty approval to make Cheney his running mate and Colin Powell his secretary of state. But talk about business did not go much farther than that, as he tells it.

Instead, the father would pass on corny jokes from afar to White House aides to pass on to his son, who says he never used email.

After the devastating 2004 tsunami, Bush asked his father and the Democrat who defeated him in 1992, Bill Clinton, to lead a private fund-raising mission to the stricken region. Thus began an unlikely friendship between the two old rivals, and a partnership that continued when Hurricane Katrina hit the Gulf Coast.

These intersections were far rarer than true family time, and the younger Bush has plenty of stories about that.

One concerned the elder Bush’s failing health, in 2012, when he was in the hospital for pneumonia with his family around him and granddaughter Jenna, pregnant, rubbed his head. He rubbed her swollen belly. “There’s death,” said the 41st president, “and there’s new life.”