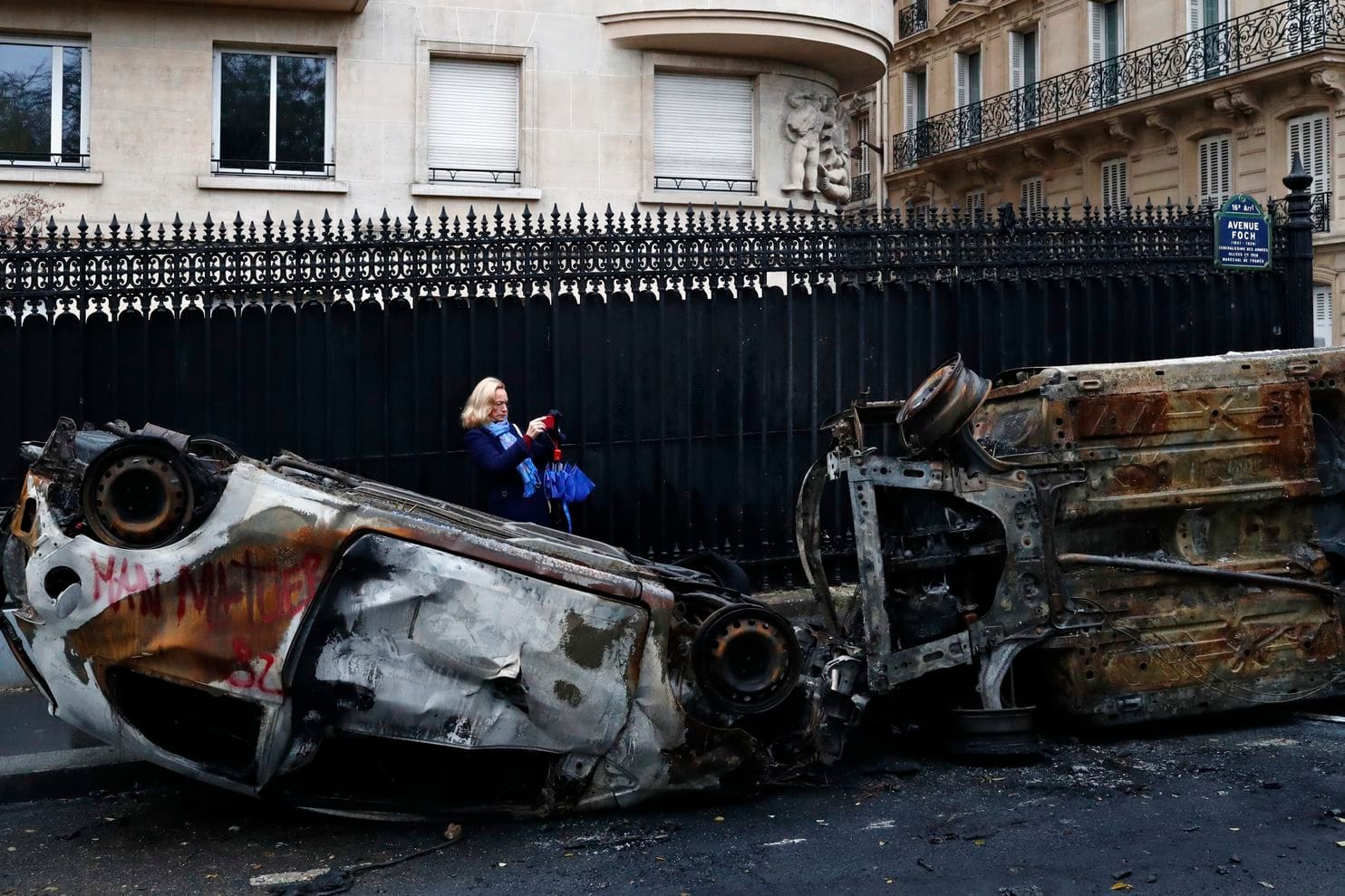 Macron, who was meeting with his prime minister and interior and environment ministers, has vowed that those responsible for the violence and the damages will pay for their actions. His tour of France’s beloved monument came just hours after he flew back from the G-20 summit in Argentina.

Macron paid tribute to the Unknown Soldier from World War I whose tomb is under the monument. He then headed to a nearby avenue where activists wearing yellow jackets had torched cars, smashed windows, looted stores and battled police on Saturday. There he met with firefighters, police officers and restaurant owners.

Paris police said Sunday that 133 people had been injured and 412 had been arrested as protesters trashed the streets of the capital during a demonstration Saturday against rising taxes and the high cost of living.

Charred cars, broken windows and downed fences from the riot littered many of the city’s most popular tourist areas on Sunday, including major avenues near the Arc de Triomphe, streets around the famed Champs-Elysees Avenue, and the Tuileries garden. Graffiti was also sprayed on many stores and buildings.

The most violent urban riots in a decade engulfed the French capital on Saturday, as “yellow jacket” protesters torched cars, smashed windows, looted stores and tagged the Arc de Triomphe in Paris with multi-coloured graffiti. (Dec. 1)

Police said 23 police officers were among the injured and 378 of the arrested have been put in police custody.

By Sunday morning, Paris city employees were cleaning up the graffiti on the Arc de Triomphe. One slogan read: “Yellow jackets will triumph” — a reference to the fluorescent yellow vests that protesters wore to demand relief for France’s beleaguered workers.

Government spokesman Benjamin Griveaux said Saturday’s violence was due to extremists who hijacked the protest, people who came “to loot, break and hit police forces.” He was asked why thousands of French police couldn’t prevent the damage, especially to the Arc de Triomphe.

“Yesterday we made a choice … to protect people before material goods,” Griveaux told French broadcaster BFM TV on Sunday.

It was the third straight weekend of clashes in Paris involving activists dressed in the yellow vests of a new protest movement and France’s worst urban violence since at least 2005. The scene in Paris contrasted sharply with protests elsewhere in France on Saturday that were mostly peaceful.

“It’s difficult to reach the end of the month. People work and pay a lot of taxes and we are fed up,” said Rabah Mendez, a protester marched peacefully Saturday in Paris.

The demonstrators say Macron’s government does not care about the problems of ordinary people. The grassroots protests began Nov. 17 with motorists upset over a fuel tax hike but now involve a broad range of demands related to France’s high cost of living.

Macron, speaking in Buenos Aires before he flew home, welcomed the views of the protesters but said there was no place for violence in public discourse.

″(Violence) has nothing to do with the peaceful expression of a legitimate anger” and “no cause justifies” attacks on police or pillaging stores and burning buildings, Macron said.