The Latest: French police struggle to quell riot in Paris 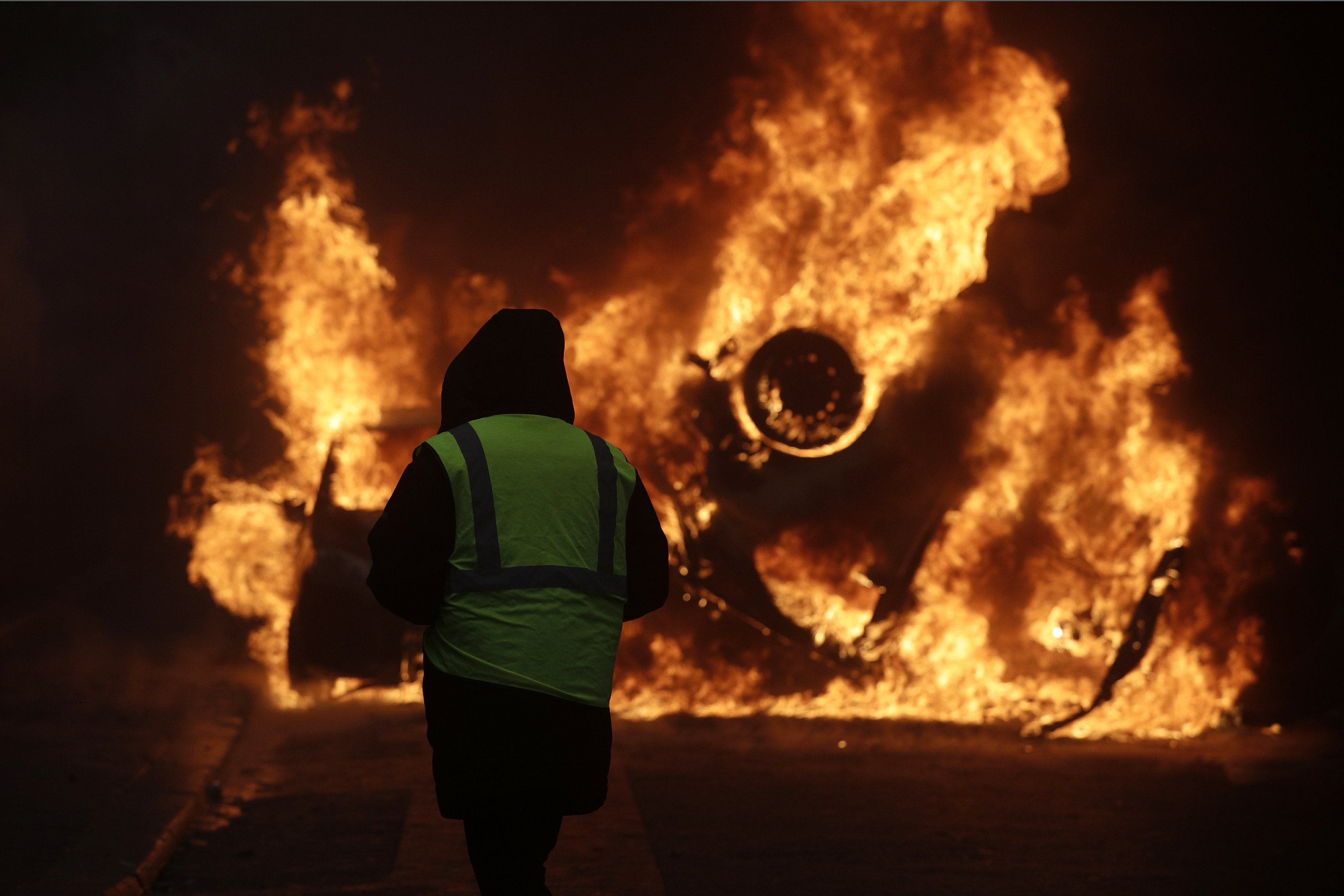 PARIS — The Latest on French protests against rising taxes (all times local):

French police are struggling to regain the upper hand against violent “yellow jacket” protesters in central Paris and are spraying protesters with water cannon.

The protesters angry over rising taxes and the high cost of living sprayed graffiti on the Arc de Triomphe, torched at least one car, and broke through the metal fence of the Tuileries gardens. French television showed police leading a shaken woman away from the protesters, and loud bangs rang out near the Champs Elysees where the violence was centered.

Central Paris was locked down by Saturday afternoon, with all roads leading away from the arc closed off as more police moved in. Police said at least 224 people have been arrested in Saturday’s riot in the French capital.

Paris police says at least 80 people have been injured, including 16 police officers, in violent protests in the center of the French capital.

Police also say 183 people have been arrested in violent clashes Saturday between police and protesters angry over rising taxes near the city’s famed Champs-Elysees Avenue and several other Paris streets very popular with tourists.

Paris Mayor Anne Hidalgo tweeted her “indignation” and “deep sadness,” saying that violence is “not acceptable.”

Protests against the high cost of living elsewhere in France on Saturday were largely peaceful.
___

Paris police say that at least 65 people including 11 police officers have been injured in violent protests in the French capital. Police also say that 140 people have been arrested.

Some protesters in France have set cars and trash cans on fire in central Paris after police pushed them away from the Arc de Triomphe monument following violent clashes.

Sporadic scuffles with police were breaking out Saturday afternoon in Paris city center as some protesters tried to build makeshift barricades using plywood planks and other material.

Meanwhile, other protesters, called “yellow jackets” because of the fluorescent vests they wear, were marching peacefully elsewhere in Paris.
___

Dutch police have closed off the parliamentary complex in The Hague after about 100 yellow jacket protesters gathered outside.

As the gas price protest that began in France last month spread to another country, Dutch demonstrators on Saturday gathered outside the historic parliamentary buildings to protest government policies.

After the demonstrators initially refused police efforts to move them to a nearby park, officers blocked the archway leading into the parliament.

As some of the protesters melted away, police on horseback and in vans later shepherded the remaining yellow jackets away from Parliament.

Dutch media reported that two protesters were detained by police in The Hague and that another protest leader was detained in the southern city of Maastricht. Police in The Hague did not immediately return a call seeking confirmation.
___

France’s prime minister says that some protesters have attacked police officers in rarely seen violence in central Paris, leading to the arrest of at least 107 people.

Edouard Philippe has told reporters at Paris police headquarters that authorities counted more than 5,000 protesters on and around the Champs-Elysees avenue.

He said “some determined, equipped individuals” gathered Saturday morning to “provoke” clashes with police. At least 10 officers were slightly injured.

He added that he was “shocked” by violence near the Arc de Triomphe and graffiti sprayed onto the monument, a symbol of the country with the Tomb of the Unknown Soldier from World War I.

He said that authorities are “determined to allow peaceful protests” and will give “no excuse to those coming to make trouble.”
___

A few dozen protesters have symbolically gathered under the Arc de Triomphe in Paris to sing France’s national anthem as others clashed with police near the famous monument at the top of the Champs-Elysees avenue.

The protesters, called “yellow jackets” for the fluorescent vests they wear, removed barriers protecting the Tomb of the Unknown Soldier from World War I to pose near its eternal flame, just under the Arc.

The words “yellow jackets will triumph” have been written in big black letters at the base of the monument.

Other protesters nearby deployed a banner addressing the French president: “Macron, stop taking us for stupid people.”
___

Paris police say at least 63 people have been arrested in violent clashes between protesters and police amid nationwide demonstrations against rising taxes and President Emmanuel Macron’s policies.

French Interior Minister Christophe Castaner tweeted that “1,500 troublemakers” are around the Champs-Elysees and near the Arc de Triomphe monument.

Meanwhile, hundreds of peaceful protesters were present on the famed avenue inside a perimeter secured by police through identity checks and bag inspections.
___

French police have fired tear gas to try to disperse a large group of “yellow jacket” protesters gathered in front of the Arc de Triomphe.

A big cloud of tear gas partially cloaked the famed monument as riot officers closed in to try to push back the demonstrators.

But protesters responded by throwing large rocks, and the officers retreated to cheers from the crowd.

The demonstrators are angry about rising taxes and French President Emmanuel Macron’s leadership. The protests began on Nov. 17.
___

Scuffles have broken out between some French protesters angry over rising taxes and police for a third straight weekend, after small pockets of demonstrators built barricades in the middle of streets in central Paris and lit fires.

Thousands of police were deployed to try to contain the protests on and around the famed Champs-Elysees avenue.

Most of the protesters, called “yellow jackets” for the fluorescent vests they wear, were peaceful. But others mixed in with them wore black hoodies and piled up construction materials, including large plywood planks, in the middle of a street near the Arc de Triomphe, and set the rubble on fire.

Police responded by firing bursts from a water cannon with backup from riot officers, who used tear gas on the protesters.
___

The so-called yellow jackets have called for new demonstrations and road blockades Saturday across France, including the capital, where a demonstration last weekend turned violent.

Hundreds of people gathered at the top of the Champs-Elysees on Saturday morning. Access to the avenue was closed to cars and strictly monitored by police with identity checks and bag inspections.

Police briefly used tear gas to disperse the crowd as some tried to force their way through.

The protests, which began with motorists demonstrating against a fuel tax hike, now involve a broad range of demands related to the country’s high cost of living.