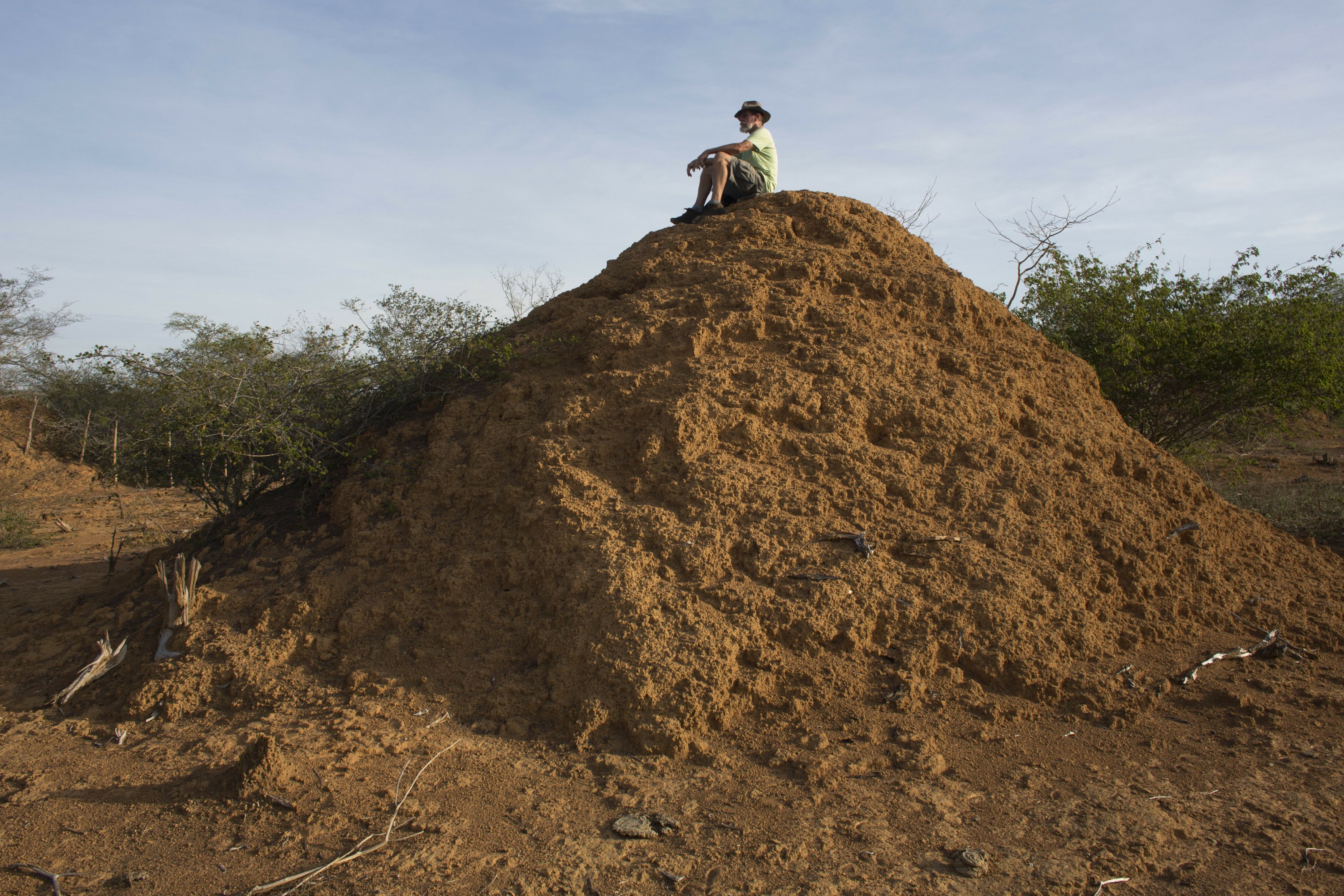 PALMEIRAS, Brazil — Roy Funch, an American botanist who has lived and worked in Brazil’s hardscrabble northeast for decades, long looked at huge cone-shaped mounds of mud in the distance and wonder.

What built them? How many were there? How long had they been there?

After years of failing to generate interest in the mounds, a chance meeting with an English expert on social insects, Stephen Martin, led to remarkable discoveries: There are over 200 million mounds built by termites that stretch across 88,800 square miles (230,000 square kilometers), about the size of Great Britain.

The mounds, seen in various places in a vast desert-like region called the Caatinga, stand between 6 and 13 feet (2 to 4 meters) high and are spaced roughly equally apart — between 52 and 72 feet (16 to 22 meters).

To landowners who clear brush to plant crops, the mounds are a nuisance. Bulldozing them is difficult because over years of being baked in the hot sun, the already-hard dirt and clay become like stone. Poor people in the area use chunks of the mounds to build adobe houses.

Funch says he wrote two articles about the mounds in Brazilian publications, but they didn’t draw any attention. Without expertise in insects or the world of scientific publishing, he wasn’t sure how to take his research to the next level.

Enter Martin, an entomologist at the University of Salford in England. A few years ago, Martin was in northeastern Brazil studying honey bees and ants in the state of Bahia. He, too, was curious about the mounds.

“I was intrigued because of their patterns,” he said.

By chance, Martin and Funch met next to a river in Lencois, a small town in Bahia about 30 miles (50 kilometers) west of the edge of the mound area.

When Martin mentioned seeing the mounds while he was driving around, Funch told him: “You just met the only guy in Brazil who is working on these mounds.”

The two teamed up, and their research was published Nov. 19 in Current Biology.

The pair concluded the mounds were built by Syntermes dirus, a large termite species that feeds on leaves and lives underground. While the termites are found in the region, the researchers didn’t find them actively working in the larger mounds, but instead along the edges of areas with mounds.

Cutting into several mounds, they found only a small tube-like hole going to the top of each one, not an extensive pattern of tunnels throughout. That suggested the termites were simply finding a place to chuck earth from underground, where they build their tunnels.

“These are just waste heaps,” said Martin. “Under normal circumstances we wouldn’t see them because they wouldn’t persist for such a long time.”

In more humid areas where the same species lives, such as the Amazon, the mounds are eroded by rain and wind. But the Caatinga ecoregion gets rainfall only a few weeks a year. The desert shrubland vegetation covers and camouflages the mounds in large swaths of the area, one of the reasons they were essentially hiding in plain sight.

Funch said improvements in Google Earth’s imaging in recent years helped them understand the extent of the formations via spatial mapping.

“The mounds go on forever in every direction,” said Funch, who initially came to Brazil as a Peace Corps volunteer in 1977 and stayed.

The mounds are also very old. Radioactive testing determined they ranged in age from 690 to 3,820 years.

“It could have been a giant termite (that built the mounds),” joked Luciano Oliveira, a local who lives in a house made with earth taken from a mound. “Nobody knows.”

While many people view termites as pests because some species eat wood, and thus homes, the social insects are also some of the world’s best engineers, building vast networks of underground tunnels and huge heaps of dirt.

An Associated Press journalist who accompanied Funch to watch the nocturnal termites at work saw soldier termites about a half-inch long and with large pincers stand guard while smaller workers gathered dead leaves and cut them in smaller pieces, making “click, click, click” sounds as they worked. When a flashlight was shined on the termites for a few seconds, they scurried down small holes.

Rob Pringle, a Princeton biology professor who has studied termites and their mounds in Kenya, Mozambique and Namibia, said fighting between termite colonies can lead to patterns in the mounds they produce.

The fact that the Brazil study found the termites didn’t fight unless they were from colonies several kilometers apart means there is a lot more to discover about how termites create such patterns.

“We keep peeling back different manifestation of these incredible, huge-scale spatial patterns in nature,” Pringle said.

Funch and Martin say there is much they still need to investigate.

Among the major questions: Why don’t the mounds appear to have active colonies underneath them? What causes the uniform spacing? And how long did it take termites to make the biggest mounds?

“These are Mayan temples that the locals knew were here,” said Funch. “But the critical eye of science is just beginning to discover them.”