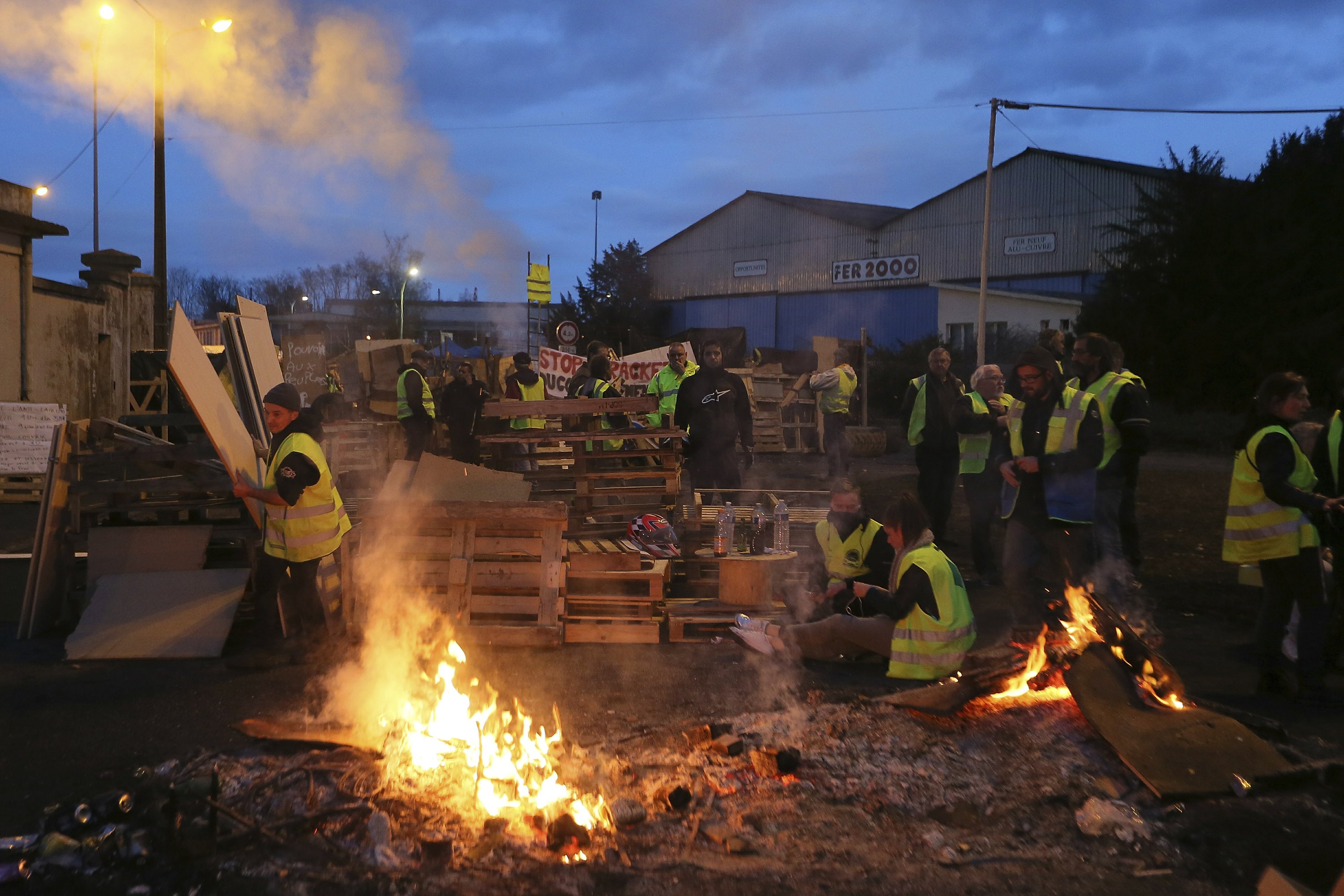 PARIS — Trade unions and farmers pledged Wednesday to join nationwide protests against President Emmanuel Macron, as concessions by the government failed to stem the momentum of the most violent demonstrations France has seen in decades.

The “yellow vest” protests began over a plan to raise fuel taxes, but by the time Prime Minister Edouard Philippe bowed to three weeks of violence and suspended the plan Tuesday, the protesters were demanding much more.

And on Wednesday, France’s largest farmers union said it will launch protests next week, after trucking unions called for a rolling strike.

Trade unions have not so far played a role in the improvised movement, but are now trying to capitalize on the growing public anger. A joint statement from the CGT and FO trucking unions called for action beginning Sunday night to protest a cut in overtime rates, and asked for an urgent meeting with the transportation minister.

Farmers union FNSEA said it would fight to help farmers earn a better income, though it said it would not officially be joining forces with the “yellow vests,” as the protesters have come to be called after the high-visibility vests French motorists are required to keep in their cars, and which they don for demonstrations.

French police have cleared most of the fuel depots that protesters had blocked, but fuel shortages continued to hit several parts of France on Wednesday, with hundreds of gas stations affected.

Demonstrators were also blocking toll booths, letting drivers pass without paying, to press demands that ranged from income and pension rises to the dissolution of the National Assembly, France’s parliament.

At Tolbiac University in downtown Paris, students took over a school building and classes were canceled.

“We need taxes, but they are not properly redistributed,” protester Thomas Tricottet told BFM television. “We obviously need to fight against this.”

High school students’ union FIDL called for a “massive and general mobilization” on Thursday and urged the education minister to step down.

One student was injured during protests in front of a high school in Saint-Jean-de-Braye in north-central France. BFM said he was shot in the head with a rubber bullet; authorities did not immediately confirm that. Julien Guiller, head of communication at the regional school administration, told The Associated Press that the student was expected to survive.

The government was clearly on the back foot. A day after announcing a six-month suspension of the fuel tax rises, it opened the door for more concessions as spokesman Benjamin Griveaux did not rule out bringing back a wealth tax that was slashed soon after Macron came to power in May 2017.

“If something isn’t working, we’re not dumb — we’ll change it,” Griveaux told RTL radio, though he said “the issue is not on the table for now.”

Macron’s popularity has slumped to new lows since the first demonstrations took place on Nov. 17. The former investment banker, who campaigned for deep pro-business economic reforms, is accused of being the “president for the rich” and of being estranged from the working classes.

Since returning from the G20 summit in Argentina over the weekend, Macron’s actions have done little to change that perception.

He has refrained from speaking publicly about the protests, and has largely remained in his palace residence. On Tuesday night, he was booed and jeered as he traveled to a regional government headquarters that was torched by protesters last weekend.

By caving in to the protesters’ demands on fuel taxes, Macron also lost credibility in the fight against climate change, which he has tried to champion. U.S. President Donald Trump said Macron’s decision to delay the tax hikes show he doesn’t believe in an international climate accord.

“I am glad that my friend @EmmanuelMacron and the protestors in Paris have agreed with the conclusion I reached two years ago,” Trump wrote on Twitter. “The Paris Agreement is fatally flawed because it raises the price of energy for responsible countries while whitewashing some of the worst polluters.”