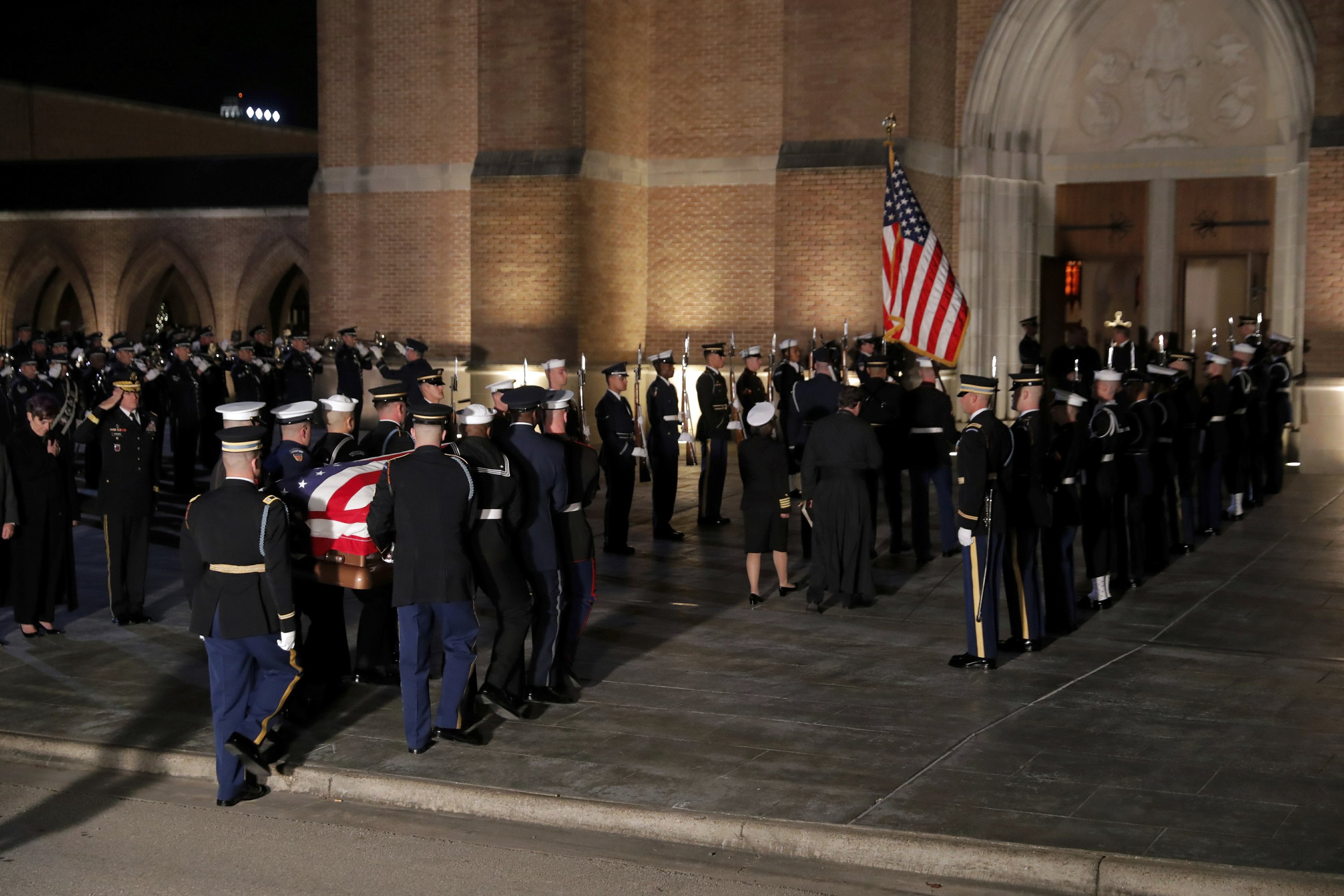 HOUSTON — Former President George H.W. Bush will be buried in Texas after a funeral service at the church he attended for many years and a special memorial train that will carry his casket.

The nation’s 41st president died last week at age 94. His casket returned to Houston after a state funeral Wednesday at Washington National Cathedral. Bush has been lying in repose at St. Martin’s Episcopal Church in Houston, where a procession of mourners paid their respects overnight.

About 1,200 mourners are expected at St. Martin’s for a service scheduled to begin at 10 a.m. CST. St. Martin’s is the nation’s largest Episcopal church and was where Barbara Bush’s funeral was held in April.

Scheduled to deliver one eulogy is James Baker, Bush’s secretary of state, campaign manager and confidant of several decades. Baker was with Bush just before the former president died.

Bush’s grandson George P. Bush will give the other eulogy. He is the son of former Florida Gov. Jeb Bush and serves as Texas land commissioner, the third generation of Bushes to win elected office in the state.

The country music group the Oak Ridge Boys will perform “Amazing Grace,” and country star Reba McEntire will also sing. The 41st president was a noted fan of country music.

Tiny Navasota, Texas will have an intimate view of the funeral train procession of former President George H.W. Bush. Thousands are expected see it as the train carries the late president to his final resting place in College Station, Texas. (Dec. 5)

A hearse will carry Bush’s casket from St. Martin’s to a Union Pacific facility north of Houston near the international airport named for him. There, his casket will be placed on a special train that will travel to the city of College Station, home to his presidential library at Texas A&M University.

The casket will be placed in a special car with Plexiglas windows. The train will take about 2½ hours to travel roughly 70 miles (113 kilometers), allowing people to pay their respects along the way.
___

The train is scheduled to arrive in College Station just before 3:30 p.m. CST. Among the hundreds of people waiting will be Texas A&M leaders, staff from the president’s foundation and library and students from the Bush School of Government and Public Service.

The Bush family will be taken to the presidential library, where Navy planes will fly over in a “missing man” formation. Bush was a Navy pilot who was shot down during World War II.
___

Bush will be buried in a private service next to Barbara Bush and their daughter Robin, who died of leukemia in 1953 at age 3.

There will be a 21-gun cannon salute after the Lord’s Prayer is recited. The American flag will be presented at the end of the service to his daughter Doro Bush Koch.