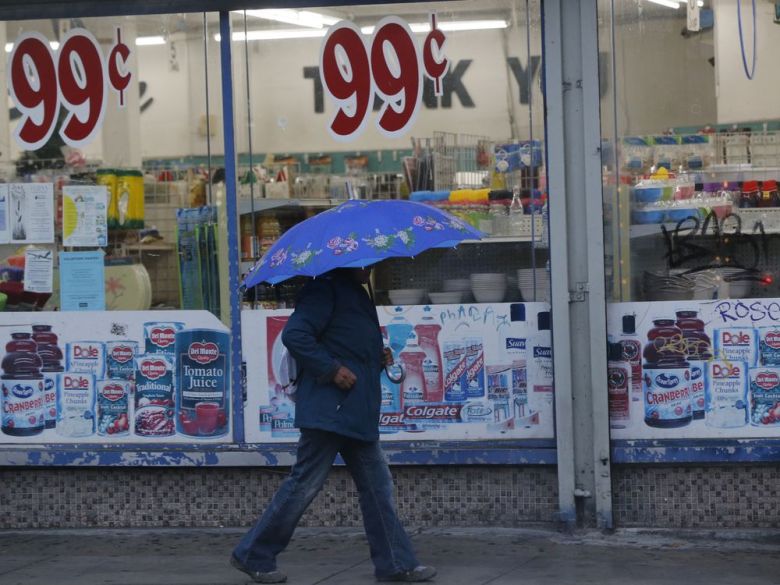 The second storm in a week dropped record-breaking rains on downtown Los Angeles, jammed major roads and sent an airliner skidding off a runway, but no major injuries were reported.

Mandatory evacuations were ordered for areas of Orange and Riverside counties ravaged by a summer wildfire. Black, surging torrents choked with downed trees and mud swept down channels near homes and in one case swept across a bridge and took out a guardrail.

No homes were seriously damaged but even though the storm eased by nightfall, evacuation orders for hundreds of homes in Trabuco Canyon in the Santa Ana Mountains south of Los Angeles and for a few neighborhoods in the Lake Elsinore area east of Los Angeles remained in place overnight.

Other Lake Elsinore areas had their mandatory evacuation orders downgraded to voluntary evacuation warnings late Thursday night, although fire officials said there was still a potential for dangerous conditions and urged residents to remain vigilant.

Also in Lake Elsinore, firefighters worked into the night lining a street with sandbags to protect homes.

“We just don’t know the stability of our hills anymore,” Lake Elsinore Mayor Natasha Johnson told KABC-TV earlier. “The fire did its devastation … the hills behind us that are not a concern could become a concern very quickly.”

A mudslide shut down Pacific Coast Highway and surrounding roads in and around Malibu neighborhoods charred by another fire last month last month that destroyed hundreds of homes.

Kirby Kotler and his neighbors spent days before the storm stacking 18,000 sandbags behind their homes along the highway. But when heavy rains arrived, mud, water and rocks blasted through the bags and across their properties.

Kotler, who wielded water hoses to beat back the flames in November, used a tractor to keep the debris from entering his home.

“Saving my house once again,” said Kotler, 57, a lifelong Malibu resident. “I’m more than a little concerned. If we get another blast of heavy rain there’ll be no stopping the hill from coming down.”

At Hollywood Burbank Airport, about 15 miles (33 kilometers) north of downtown Los Angeles, nobody was hurt when a Southwest Airlines plane from Oakland skidded off a wet runway as it landed. The plane came to a stop in a graded area designed to slow aircraft that overshoot the runway, the Federal Aviation Administration said.

“As we landed, you could feel the brakes,” passenger Grant Palmer told KABC-TV. “Then I started noticing the plane going sideways.”

Palmer said he was prepared to tuck into an emergency posture while his unflappable co-worker continued writing emails during the rough landing.

Los Angeles and the rest of Southern California sorely need rainfall. Virtually the entire region is experiencing drought conditions, with portions of Los Angeles and Ventura counties and areas along the Mexican border in extreme drought.

The storm provided a big boost in and around Los Angeles. The downtown area set a new rainfall record for the day with 1.9 inches (4.8 centimeters) of rain, nearly double the previous record set in 1997, the National Weather Service reported. Normal monthly rainfall for December is only a bit more — 2.33 inches.

Elsewhere, fire crews had to rescue a man from the flood-swollen Los Angeles River, a concrete flood control channel, and also helped motorists to safety in several areas where cars became stuck in flooded intersections.

While rain caused numerous accidents and backups on LA-area freeways, heavy snow forced the closure of Interstate 5 in the Grapevine area between Los Angeles and the San Joaquin Valley. The hours-long shutdown along the key north-south route caused backups for miles.

Motorists were urged to use caution on mountain passes, where up to 6 feet (1.8 meters) of snow was predicted at higher elevations.

The end of the storm will be followed by a ridge of high pressure that will bring dry and warm conditions to the area through the weekend but another storm system could move in early next week, the weather service reported.